Movie Review: ‘Last Call’ is a film that has to be seen to be believed 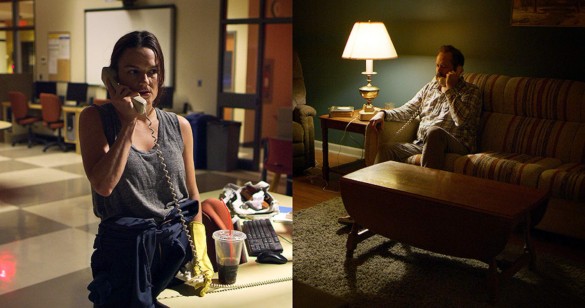 The one-shot film is a challenge that very few film directors take on; in the past we have seen the likes of Alfred Hitchcock and Sam Mendes being brave (or maybe that should be mad) enough to take on this challenge. Gavin Michael Booth takes on another challenge with his impactful and moving drama Last Call: he also uses split-screen and shoots two films in real time, without a single cut. It sounds like a gimmick, however there’s nothing about Last Call which is ‘gimmicky’. Not only is this film a technical marvel to behold, but it’s also an incredibly compelling story that features two powerful performances. Last Call is one of those rare films that leaves you in absolute awe, wondering just how the filmmakers managed to pull off such a magic trick.

Written by the film’s main male lead, Daved Wilkins (known for his work on The Mindy Project), the film follows his character Scott, a lonely and resentful man who is having a bad night. Frustrated and depressed, he makes the decision to call a Suicide prevention hotline, but accidentally calls Beth, a janitor played by the wonderful Sarah Booth. Beth is experiencing her own woes; she is a single mother with a rebellious son, and is also working two part-time jobs as well as being a student.

She answers the call not realizing who is on the other end of the line. Scott opens up to Beth and at first she seems reluctant to help (this is way outside her pay grade and she’s not trained). Scott can also come across as arrogant and sarcastic, but he’s trying to mask his pain and the loss of his son (this night just happens to be the anniversary of his death). Last Call unfolds like a classic Noir/Detective film, with Beth (and the viewer) carefully trying to piece together the reason for Scott’s call. Unfolding in real time Beth is essentially working against the clock in order to help save Scott’s life.

Last Call shouldn’t work but it does, on paper it all sounds rather too familiar but combined with the stunning performances from both Booth and Wilkins, the narrative feels fresh and original. The story hits all the right beats, smoothly running without a hitch for its 77 minutes runtime. There are some familiar character traits but the performances manage to excel the material to a whole new level. Any other actors just wouldn’t be able to pull these characters and the dialogue off, you can tell from their performances that both these actors have a history in the theater. It’s clear that these actors have the experience, the enthusiasm and the passion for acting as they both manage to dominate the screen for the entirety of the runtime. Even though the characters never meet on-screen we still feel their emotional connection such is the power of the actors’ performances.

Sarah Booth’s Beth is the clear standout of the film. Her character goes on a dramatic journey as she goes from being this apathetic individual at the start of the film who manages to transform into this person full of empathy and concern for a man she has never met. The film’s last few minutes manage to showcase just how much talent Booth contains with her. If you are not moved to tears by her struggle to contain her emotions, then you are made of very stern stuff indeed. Wilkins is known for his comedic work but he manages to show us all just what he is made of. It’s not always an easy transition from comedy to drama, but Wilkins makes it look like a breeze.

Honestly, at first the split-screen does take time to adjust to; it can be slightly confusing to follow, but Booth makes the decision to play around with the sound for each character, lowering the levels for one screen so we can hear the dialogue in the other. The film is beautifully shot by Booth and fellow cinematographer Seth Wessel-Estes, the hand-held camera helps to add a layer of realism to the film. The movement of the camera keeps the pace and maintains the tension so it almost feels as if we are there with Scott and Beth. We are a part of this shared experience with them even though we also have the privilege of being outside of the action, witnessing both perspectives unfold at the same time.

Booth is no stranger to taking on ambitious projects; in the past he has teamed up with producer Jason Blum (Paranormal Activity series, The Purge, and Oscar winning Whiplash) to create the world’s first movie broadcast live using Twitter’s Periscope App, but with Last Call he has outdone himself. Another key player is the film’s composer Adrian Ellis who also took on the task of composing the music in real time which is a beautiful companion to the film. Last Call is a film which pulls on all of our heart strings but never feels manipulative or melodramatic. It’s a very human tale which connects with many of us and it’s a film that has to be seen to be believed.