Movie Review: ‘Lamb’ is a very subtle, but beautiful film about unconditional love 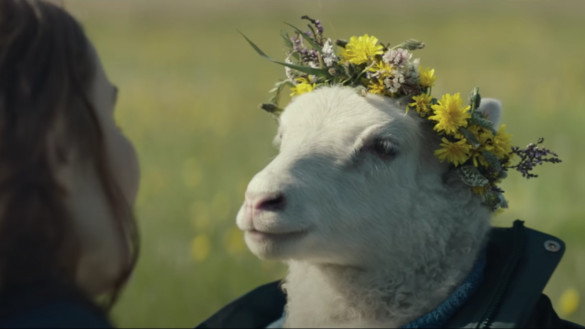 Synopsis: A childless couple, María and Ingvar discover a mysterious newborn on their farm in Iceland. The unexpected prospect of family life brings them much joy, before ultimately destroying them.

A24 is no stranger to unique and inventive horror films, but even so, Valdimar Jóhannsson’s Lamb is arguably their most mystifying to date. To say that it’s bizarre is putting it mildly. Jóhannsson, who mostly worked as a special effects technician in Hollywood, has crafted a bold and evocative film that is without question a peculiar experience, but it works wonderfully on its own terms by embracing its surreal premise and treating it with sincerity.

We live in a world today where spoilers are abound, and sometimes even a synopsis or a trailer can give away more than what is needed, leaving audiences with expectations going into the film. It’s something we’ve become accustomed to and yet we still walk away satisfied much of the time. However, Lamb is one of those singular experiences that works best if you know nothing about it. You need to go in cold. So, before I go any further into any sort of detail, a fair warning that some of Lamb will be spoiled for those who haven’t seen it yet. While I won’t give away the ending, there are some things that need to be revealed to discuss it properly, and again, it’s best to see Lamb as cold as possible.

With that said, Lamb is about a couple, Maria (Noomi Rapace) and Ingvar (Hilmir Snaer Guònason), who live on a farm in remote Iceland. They attend to their sheep daily. They plow the land for harvest. They have a small, but cozy house with a nice view of the mountainous landscape around them. A few of their sheep are about to give birth as mating season is coming to a close. Maria and Ingvar are quiet and somewhat distant from each other – physically and emotionally. There doesn’t seem to be any sort of contention between them, however, there’s an unknown wedge that we aren’t sure of initially.

This is where things become strange, to say the least. One of lamb’s that are born is…wait for it…half sheep, half human. Specifically, the body is of human nature while the head and right arm is fully lamb. Maria and Ingvar are disturbed and unsure of what they are seeing, but they don’t act with disgust or trepidation. Instead, Maria wraps up the creature and takes it into the house, away from the sheep mother. They build a crib for the lamb and even give her a name, Ada. It doesn’t take very long for Maria and Ingvar to accept Ada as one of their own, never questioning how Ada came to be. They develop a genuine love for the creature that deliberately, and mesmerizingly, juxtaposes the absurdity of the underlying concept.

Which gets even weirder when Pétar (Björn Hlynur Haraldsson), Ingvar’s brother, stumbles in randomly halfway through the film. Ada, who by this point is around four or five-years-old, comes to the dinner table to meet Pétar for the first time, and the befuddled look on his face is pure gold. Honestly one of the funniest moments of the year so far, but it’s subtle and quiet enough to not be tonally jarring. And let’s be honest, anyone in his position would have a “WTF” moment.

As things progress, we learn more about Pétar and his murky history. He’s a former musician. His feelings toward Maria are questionable. However, Jóhannsson and co-screenwriter Sjón (an Icelandic novelist who also scripted Robert Eggers’ The Northman) do a great job of never letting Pétar becoming too much of a distraction. Lamb could have easily detoured into an unnecessary love triangle, but it never comes close to that. The film refuses to accept melodrama. Instead, it’s Pétar’s evolution toward Eda that becomes part of the crux at the emotional core. There are a few shots with Pétar and Eda that are phenomenally endearing.

This transition in Pétar is important because we do learn that Maria and Ingvar are grieving. Their marriage has been marred by tragedy, but Eda has given them hope. Hope that transforms into unconditional love and royal compassion, despite the uncanny nature of how it came to be. This is what gives the film’s metaphor power. While *very* different tonally and stylistically to Julia Ducournau’s Titane (that is also in theaters currently), the two have eerily similar thematic structures. The unnatural biology of Eda does not to Maria and Ingvar. They happily pretend that nothing is weird. Eda has given them a blissful moment of peace in the middle of their grief. Something we see that is deeply meaningful to both Maria and Ingvar.

One of the best scenes of Lamb involves a drunken celebration as Maria and Ingvar indulge in their new found love for each other. Pétar is off with Eda fishing (a charming visual shot on its own), and when they get back to the house the drinking continues with Pétar as well. When Ingvar gives into the alcohol, and decides to take a nap, he asks Eda to come cuddle him as he falls asleep. She does, and it demonstrates evocatively Ingvar’s deep paternal love for Eda. Maria’s maternal instincts are more vivid and perhaps more often, but it shouldn’t be lost that Ingvar equally cares. The healing they are experiencing is shared, and potent on screen.

This brings me to Jóhannsson and his confident direction. Lamb is audacious and distinct, but what gives it an extra heft is the restraint that Jóhannsson shows in his filmmaking. This is an extremely patient and introspective film. A slow burn with a heavy focus on stillness and subtle emotional complexity. The tone is mostly grim and brooding, but with a few moments of precise levity to maintain organic humanity. Jóhannsson’s use of the supernatural is also deftly handled. We understand that something is awry, something that Lamb teases on occasion, but Jóhannsson waits. And he waits. And he waits. Until the time is right. And when things are revealed at the end, boy does it jolt.

So much of the film’s visceral nature is in Jóhannsson’s tone management, but also in Pórarinn Guõnason’s stunning cinematography. The visuals here are redolent and beautiful, while also giving the experience an ominous, looming quality that keeps us wondering what’s around the corner. Rapace gives one of the better performances of the year that will have zero impact on awards season. She’s really great in this film. Guònason is also very good and vitally gives credence to Ingvar’s fatherly tenderness.

Lamb will be a struggle for audiences who aren’t willing to ride the film’s methodical pace. There’s also very little drama and conflict. At least externally. Most of the film’s nuance is in character reaction. The love they display. The grief they are experiencing and the relief in Eda. Those ideas will also challenge audiences given what plays out in the final scene. As far as I’m concerned, this is one of A24’s better horror films of late. It can’t be overstated how understated it is, and how much that works in this context. It’s brazenly weird, but with poignant purpose. I say to A24, please give us more Lamb‘s.

Movie Review (Sundance 2022): ‘FRESH’ is a Mix of Tones that Manages to Cook Up a Storm

Movie Review (Sundance 2022): ‘A Love Song’ is Short, Simple and Sweet, Almost to a Fault