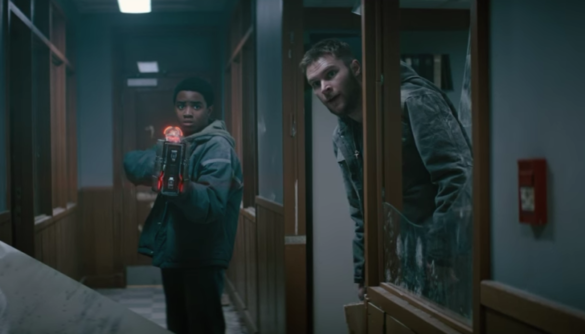 Synopsis: Chased by a vengeful criminal, the feds and a gang of otherworldly soldiers, a recently released ex-con and his adopted teenage brother are forced to go on the run with a weapon of mysterious origin as their only protection.

Johnathan and Josh Baker’s Kin suffers from a cinematic identity crisis. The film itself plods along for one hour and forty minutes attempting to morph into various types of film, none of which it does successfully. Is it a melodrama? Is it an action flick? Is it science fiction? The only thing which appears evident watching Kin is the Baker’s brothers (who wrote the film as well) don’t have a clue either. The end result is a storyline is equal parts meandering and contrived. Why would anyone willfully subject themselves to this?

Kin is based on the short film Bag Man. Eli (Myles Truitt) is a lonely African American child who while pulling copper wire from abandoned buildings stumbles upon a weapon which turns him into basically a superhero. His adoptive dad Hal (played by Dennis Quaid) works long hours at the construction site to put food on the plate for his son. Eli’s adoptive brother Jimmy (Jack Reynor) comes home after being in lockup for six years. From the moment he shows up on Hal’s doorstep, trouble has already begun. Jimmy is in deep with local crime boss Taylor Balik (James Franco) for protection services provided while in jail. If he doesn’t find $60,000 fast, he risks his whole family being killed. Faced with no options, he decides that the safest route is to rob his dad’s construction business (eye-roll). Tragedy strikes and the brothers are forced to go on the run. While hiding out in a local adult establishment, they manage to befriend Milly (Zoë Kravitz) who plays a stripper with a conscience. When trouble erupts at the bar (mainly because Jimmy is a hot-head), rather than hide out with the other dancers in the back, Milly decides that these brothers who she just met are trustworthy to run off as they make their way towards to Lake Tahoe. Meanwhile, Balik’s crew is in the midst of tracking down Jimmy so they can exact some revenge after what took place at Hal’s construction site. Oh! Did I mention two space soldiers are also attempting to track them down as well so that they can recover their weapon?

The Baker brothers have developed a tale which is chock full tropes which really have no rhyme or reason to them. Instead of going with the “less is more” approach, the writing team decided to throw in so much into the film that Kin just fell apart. As someone who actually sat through this film, I should be able to make at least some sense of what the film wanted to be, but it is still a mystery. Mark Day’s film editing was atrocious. There were actual moments where Hal and Jimmy were having a family moment and then inexplicably we’d cut to a part of the film which had little connection to what we had just seen. What were they hoping to accomplish with this?

The performances in the film Kin matched the source material which was lackluster at best. Zoë Kravitz’s character Milly didn’t have a real purpose in the film. Jack Reynor’s character Jimmy was supposed to be the most the most conflicted, and he came across as more spoiled than conflicted. The depth in Myles Truitt’s performance as Eli was superficial (and that’s being nice). The score was overmodulated, and the overabundance of synthesizer sounds was so irritating that it almost caused me just to leave the theater.

Overall, I can’t imagine a worse choice this weekend than having to sit through Kin. If anyone feels the burning desire to see this train wreck, then I urge you to follow these simple steps

Why subject yourself to a movie that undoubtedly will be on Red Box in a few weeks and in the dollar bin at Walmart in about a month.