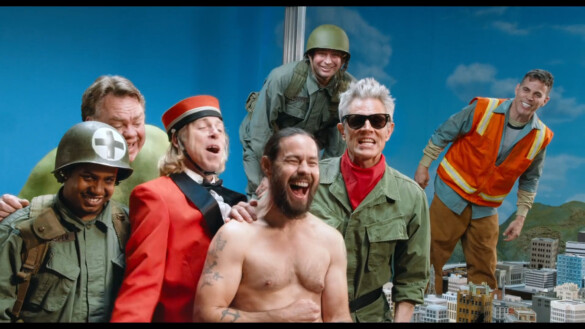 Synopsis: 12 years after the release of the third film, the Jackass crew reunites for a final collection of outrageous stunts.

“When was the last time you got together with your old friends to laugh your asses off?” This is the quote that kicks off the theatrical trailer for Jackass Forever, the latest (and apparently final) outing from the crew that began participating in shocking stunts back in 2000. Rather than just a humorous way to try to bring people back to the theater to watch a bunch of grown individuals act like children, that line is the essence of the movie itself. While the film is simply a compilation of such painful and unsanitary acts, it’s also a reflection on the wild journey the team has taken over the years.

Even as one who is more familiar with Jackass as a concept than as an actual viewer, I’m able to have a strange appreciation for how far the franchise has come. Perhaps the only thing wilder than the stunts themselves is that an MTV series that only lasted 25 episodes has resulted in a quadrilogy of theatrical features that essentially function as an avenue to display what they couldn’t on television. That’s certainly the case here, as the film features bare penises, explosions, human-on-human collisions, and men being covered in bodily fluids…all within the first five minutes.

As expected, the film’s stunts seek to be bigger than ever. In fact, as it becomes clear in the ending credits, some of them are simply more intense versions of acts the crew has taken on before. Highlights from this venture include “Silence of the Lambs,” a hilarious act in which unsuspecting members are locked in a room with the lights out, under the false impression that a rattlesnake is trapped in the room with them. While that alone is an uproarious concept, they take it a step further by inflicting pain and fear on those involved, using everything from mouse traps to trash can lids. An exploit like this serves as the best of the film, largely because it combines meticulous planning from the masterminds with the genuine surprise of the victims.

As with any Jackass film, this does bring up the question of how one interacts as a viewer. Let’s not shy away from the fact that it feels a little sadistic to find so much humor through the pain these guys go through. And I will say, I laughed consistently, and often quite audibly, throughout the course of the movie. What helps most in this case is that the participants seem like they are actually having fun, as deranged as that may sound. These are essentially the immature escapades of Johnny Knoxville and his Merry Fellows. And those fellows actually come off as quite merry, even just after they’ve endured what must be unreal pain. In fact, what’s even better than the stunts is what comes after – usually in the form of infectious laughter from all involved.

While sitting back and cackling at the chaos or cringing at the gross-out stunts is all good fun, what really stands out here is the sense of finality and partnership. The film mixes the old with the new quite well. Johnny Knoxville serves as a charismatic ringleader, and Jackass traditionals like Steve-O and Ehren McGhehey participate in stunts as if they’re still in their 20s. However, newcomers like Zach Holmes and Rachel Wolfson hold their own while symbolizing the oddly enduring nature of these ridiculous ventures. The only time these people aren’t laughing is when they seem genuinely concerned about a partner who may be seriously injured. It may be difficult at times to tell whether the joy is simply a performance (especially with recent news about Bam Margera’s conflicts and frustrations with the crew), but the adoration for each other is still pretty evident.

There are so many sequences here that it’s difficult to reflect on all of them while identifying the standouts. In a way, that represents the main fault of the film. There’s so much packed in that it does get to feel a bit tiresome in the middle, and some of the more minor or traditional stunts get lost in the fold. Still, moments of the best kind of hilarity remain, such as when part of the group is showered in paintballs just after getting off a makeshift tilt-a-whirl, which they took on after chugging a half-gallon of milk. There are certainly moments where actual danger can be felt too, such as a scene in which McGhehey must sit still while a full-grown bear eats up salmon laid across his groin.

With Jackass Forever, you mostly get what you expect. If you’re not a fan of this type of comedy, there’s likely not much here that will sway you, even if the camaraderie is heightened for the participants who have participated for over 20 years. If you do enjoy this sort of thing, there are enough laughs to leave with satisfaction. It also helps that the technical elements are bigger along with the stunts. We no longer have to watch this happen through amateurish home video quality, as the newer entries come with a more experienced film crew who are able to capture the chaos from all angles and speeds. The movie is best enjoyed without thinking too much, and taking in a group of wild individuals as they act like complete idiots. I’m not going to pretend there is some thought-provoking, underlying message that wasn’t there before, but I certainly did enjoy laughing my ass off with these friends.