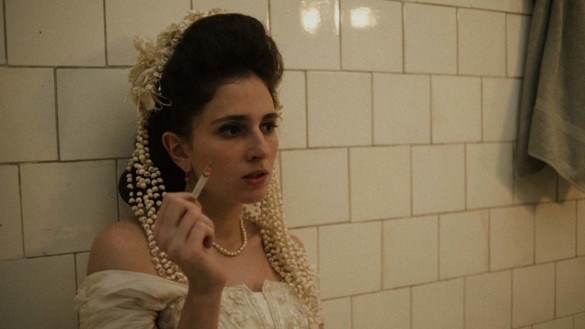 Synopsis: Two sisters born in Rio de Janeiro make their way through life, each mistakenly believing the other is living out her dreams half a world away.

Men are, to put it mildly, the worst. More on that later.

Invisible Life opens with two sisters, Euridice and Guida (Carol Duarte and Julia Stockler respectively), becoming separated during a jaunt in the jungle. They call out for one another, only to hear their own voices echo back. A clever foreshadow for what’s to come…

At its heart, Karim Ainouz’s fabulous melodrama is about sisterhood and how that special bond can never be fully severed—no matter how hard the patriarchy may try. Although the story is melodramatic by design, the two lead performances keep it from veering into soapy territory.

Duarte and Stockler—who bear such a striking resemblance that I admit I mistook them more than once—deliver grounded, three-dimensional portrayals. The blood between Euridice and Guida is thick, and their energies are perfectly balanced. Their sisterly yin and yang is freakishly believable; there’s a real harmony even when they’re not on screen together. Duarte’s Euridice is studious and ambitious, as she painstakingly works to master the piano, while Stockler’s Guida is more free-spirited and impulsive, as she flexes her feminine wiles.

They also share a penchant for sailors. One night, Guida runs off with hers—all the way to Greece. Months later, she returns to Rio de Janeiro, single and pregnant. Turns out what’s-his-name didn’t love her after all. Go figure… Then, Guida is abandoned again when her stern yet humiliation-prone father Manuel (Antonio Fonseca), ashamed of his unwed and expectant daughter, disowns her—making sure to mention that Guida need not run to Euridice, who he says has left Brazil to study music in Europe. Stockler conveys Guida’s sense of loss so lucidly.

Meanwhile, Euridice is in fact still in Rio de Janeiro, having been married off to a man named Antenor (Gregorio Duvivier) and unable to live out her dream of being a world-renowned concert pianist when she also becomes unintentionally pregnant. Antenor is sexually pushy, even coercing intercourse in the middle of Euridice’s piano-playing. These scenes especially prove why it’s important to empower female cinematographers. Helene Louvart shoots these scenarios sans any male gaze and depicts them for what they are: abuse and marital rape. Duarte’s internal turmoil is so painfully palpable.

As the years go on, the sisters live parallel lives, mere miles away, in the same enormous city, unsure when or if they will ever see each other again.

Invisible Life may not be queer on its surface, but Ainouz is an openly gay filmmaker, so queer themes are gonna happen, whether consciously or not. With Guida’s story in particular, Ainouz explores the idea of a chosen family. Unable to give up her newborn child and continue a cycle of abandonment, Guida befriends a prostitute (Barbara Santos) and together they become a (same-sex) parental unit for Guida’s son. An unusual thing for 1950s Brazil to say the least.

And with Euridice, we have a character who weds someone she does not truly love in order to please her family and maintain appearances. She had no intention to start a family, but had little choice in the matter, because Euridice has little control over her life and body. In many ways, her life is not hers to live. A concept persecuted persons know all too well.

Because the villainy of the patriarchy is the main thesis of this film. It’s what drives the sisters apart and keeps them oppressed. It’s what renders so many women second-class citizens. Inferior. Uncared for. Invisible. Okay, fine. It’s not men who are evil. What’s really rotten is the system that props them up and pushes down the rest—a system that many men are uninterested in dismantling. Or even acknowledging the existence of. This is the story of two women—sisters—who’ve fallen victim to that system (by design), and how their undying love for one another, and need to reunite, drives them to fight on.

Sublime without becoming overly sentimental, Invisible Life plays out like Douglas Sirk by way of Todd Haynes with a dash of Claire Denis. And, yes, although the runtime exceeds two hours, the finale is worth it. Heart-wrenching and near-cathartic—thanks in large part to the unshowy devastation of Fernanda Montenegro, Brazilian acting legend and the rightful owner of Gwyneth Paltrow’s Oscar.