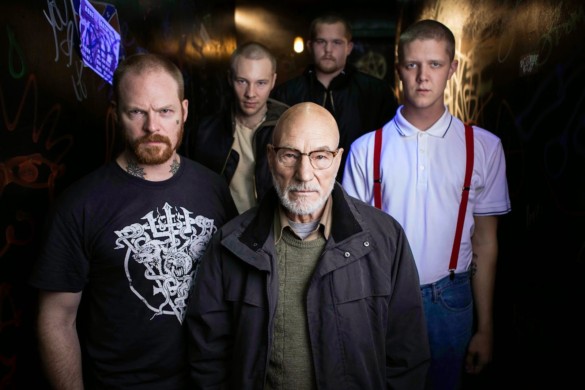 Synopsis: After witnessing a murder, a punk rock band is forced into a vicious fight for survival against a group of maniacal skinheads.

Finishing out his “Inept Protagonist Trilogy” alongside Murder Party and Blue Ruin, Green Room has cemented writer/director Jeremy Saulnier as one of the best up-and-coming filmmakers in the industry today. Saulnier has proven himself as a director who has craft but also the ability to resonate potent themes with his aesthetics and imagery. Green Room, one of our most anticipated of 2016, is no different and does not disappoint. The film certainly has commentary on the nature of violence but it’s incredibly effective as a horror/thriller, taking full advantage of it’s riveting 90 minute run-time, making the final product absolutely thrilling and unnerving.

The film opens with an introduction to the punk rock band The Ain’t Rights, who is finishing out a recent tour in their dilapidated and rugged van. They eventually wind up at a bar that is owned by Darcy (Patrick Stewart) and his group of skinheads. After teasing the crowd by doing a cover of “Nazi Punks, Fuck Off”, which doesn’t go over well, the band eventually wins over the crowd with their own original music. After the show, Pat (Anton Yelchin) walks into the green room to get a phone when he accidentally witnesses a murdered body lying dead on the floor. This sets in motion a series of events that include the skinheads trying to contain the situation by ridding the cops with inaccurate information and locking the band in the green room without any knowledge of what is really happening. Feeling trapt, the band realizes they are going to have to fight their way out and it turns into a rather bloody affair.

Saulnier’s command of Green Room is masterful. He builds thick, unrelenting tension that gradually becomes more and more intense as the film moves forward. His camera techniques brilliantly heighten the band’s confinement and visceral panic, which in turn does the same thing for the audience. The sound design is also quite excellent, using punk motifs in the score that add to the film’s eerie ambiance. The dogs’ bites feel too real, the sound of flesh being sliced is rather sickening and in some parts of the film, the lack of sound is harrowing. Everything about Saulnier’s direction is purposeful and often the imagery comes with rich symbolism.

At the heart of Green Room, Saulnier has a lot to say about violence and it’s unpredictability. Some films make violence look smooth and “cool” but Green Room is more interested in how violence is less calculated and sometimes more random and clumsy. Remember, this is part of the “Inept Protagonist Trilogy” after all. Inept is actually a great word to describe it though. Saulnier meticulously builds the tension of the situation and the panic in the characters in such a way, that when the violence does happen, it feels unpredictable, intense and pretty chaotic. And for the lack of a better term, clumsy. The band is obviously in unfamiliar territory and in most scenes we see them panicky and uncertain. Their lack of experience with violence supplants the film in realism and relatability. It’s not just the band too. The skinheads, while more equipped for violence, aren’t always sharp and depict some rather inept behavior at times.

Simultaneously, Saulnier has something to say about our capability of violence. You could say both parties (the band and the skinheads) are in a situation against their own will and both are reacting to what they perceive is a threat. And both parties become capable of violence when that threat becomes very real. At the same time, we see how both parties are capable of logic and reasoning too. Initially, the skinheads, in particular Gabe (Macon Blair) and to an extent Darcy, just wanted to contain the situation without using violence. It eventually gets too out of control for Gabe and Darcy, and the band really, which leads to a viscous climax. Despite intentions, both sides render this capability of violence when they are forced into it to protect themselves.

The way Saulnier keeps this film balanced is excellent, and more importantly, it’s pivotal in showing us how each side does reflect humanity. You may or may not agree with the skinheads philosophy but the Gabe character is human, timid and just as stuck as the band (and audience) is in this situation. Green Room‘s themes are depicted arduously but are fundamentally layered and structured with powerful and purposeful imagery. In fact, all these notions collide beautifully in one image at the end of the film. During the band’s first escape attempt, we saw how the skinheads used a pair of dogs for some heinous acts of viscous violence. At one point, one of these dogs gets loose and near the end of the film, takes an action that shows us he’s capable of sympathy and connection. It’s a potent moment, with strong symbolic imagery, that reflects impeccably Green Room‘s themes regarding the nature of violence, non-violence and how unpredictable it all is.

You also have to give credit to the film’s cast for making these notions feel so visceral. The band in particular, including Yelchin, Joe Cole, Alia Shawkat and Callum Turner, alonside Imogen Poots, give exactly what you need for the situation to feel relatable as it ties to their instincts and urgency. These characters aren’t dumb, but there’s a cluelessness that percolates through each character due to their inexperience with this type of panic. They simply don’t know how to react to their confinement and the performances make that feel very real. The culmination of these performances, alongside the always looming suspense, gave the film a palpable sense of futility that is quite mesmerizing.

Macon Blair is also noteworthy given his importance to the film thematically as well as Patrick Stewart, who is terrifying. Stewart’s subtlety and calm demeanor gave his character of Darcy a chilling effect that lingers every moment he’s on screen. The two work together so brilliantly.

Green Room is a film that will go down as one of 2016’s best films. It builds extremely well, adds intense thrills and features a robust thematic undercurrent with powerful commentary on the nature of violence in our culture today. Green Room stands out as a film that takes genre conventions and flips them in the most compelling fashion possible, and as a result, Saulnier’s offers something that both thrill-seekers and art-house nuts can both enjoy.