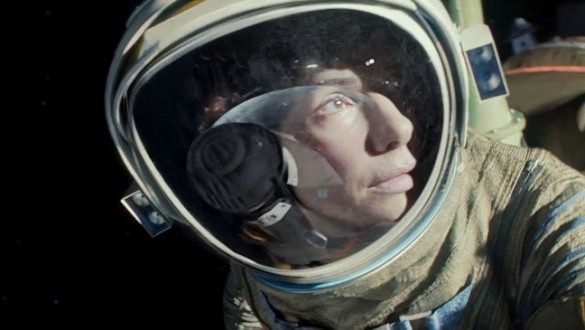 Synopsis: A medical engineer and an astronaut work together to survive after an accident leaves them adrift in space.

DIRECTION
The first thing to know about Alfonso Cuarón’s Gravity, is that it’s not just a visual spectacle, but it’s an interesting character piece as well. However, it’s the visual style here that places this movie among some of the best we’ve ever seen. It’s the best 3D movie since Avatar and you can tell he’s been working on this for years. Many shots specifically rely on the 3D effect to give you the trill ride Cuarón is looking for and it’s incredibly effective. The aesthetic is the best I’ve ever seen for a space movie and is one of the more realistic one’s you’ll encounter to date. You really feel like you’re in space floating around and experiencing something you never have before. The camera almost operates as it’s floating around too. It circles often, turns in various ways and it very specific to show you depth and the different ranges of space. The visuals of earth and the sun are absolutely gorgeous and breathtaking. This is easily the best visual effects in quite some time and easily the best of 2013. Buckle up and enjoy the ride.

SCRIPT
The story is pretty simple on the surface. Ryan Stone, Sandra Bullock, is a medical engineer and is teamed up with astronaut Matt Kowalski, George Clooney, who are working on a new project up in space in lower Earth orbit when disaster strikes. It’s a simple survivor story right? Wrong. They both become adrift in space and now have to team up to survive and figure out how to get back home. Throughout the struggle, we find out that Stone has some bad heartache and is still learning to grieve and let go of her pain. Yet, Kowalski, is a fun-loving guy looking to break some space records but ultimately knows what to do in order to survive. Once you start digging beneath the surface, Gravity speaks to amazing concepts of struggle and the fight to survive. This is especially difficult when you don’t have anything to live for, but when you find that reason, it’s not about just getting by but living each moment like it’s your last. Sure, some parts of the script rely on coincidences and luck, but those moments are forgivable and small in the big picture of things.

PERFORMANCES
Sandra Bullock can be hit or miss, depending on who you ask, but in Gravity, she’s a homerun. Regardless of what you think about Bullock, she does drama well and as a character who is traumatized in life and now the situation she faces, Bullock shines. Her character has depth and she brings a lot of emotion to her which is incredibly effective. You fall for her character and the struggle that she’s in, both as a person and the situation. To me, this is Sandra Bullock’s best role she’s ever done. George Clooney has less screen time than expected but is also very good. He’s the jokster, fun-loving astronaut that has a lot of stories to tell. He’s also smart and comes across very engaging. Clooney doesn’t have as much to do but is really good for what his character calls for. And you have to love the Ed Harris cameo. He was amazing in Apollo 13 as the NASA commander and is back in Houston as the voice that communicates back to our struggling astronauts.

SCORE
This is by far Steven Price’s best score. He was great in The World’s End, but his score not only is effective here but it’s a critical piece to the film. This movie calls for emotion and is a huge spectacle and Price’s score reflects that beautifully. He uses a lot of strings mixed with digital music and even some voice work. It’s a good listen outside of the film and is perfect for what this film needed.

FINAL THOUGHTS
Gravity is a movie you want to see in 3D. In fact, go to the biggest IMAX 3D screen you can find. The visuals are absolutely stunning and gives you the best 3D thrill ride you’ve seen in a long time. The performances shine and you feel like you’re a part of the action in space. If you want to know what it’s like in space without ever going there, watch this movie. It’s absolutely incredible.