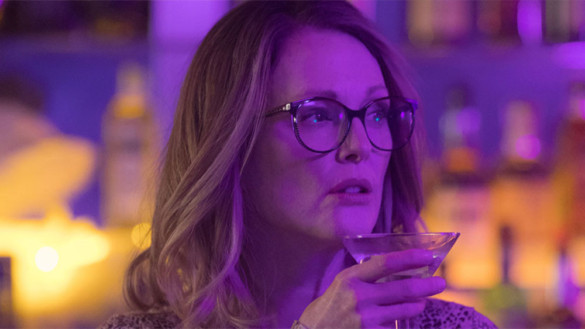 Synopsis: A free-spirited woman in her 50s seeks out love at L.A. dance clubs.

Humans are not meant to be alone, that’s at least what I believe. Whether it is a pet or another person, I think that we need something to keep us from going to a downward spiral of sadness. So while I was watching the events of Sebastián Lelio’s Gloria Bell, I couldn’t help but feel true sorrow for the title character of the film as she is going through so much bad luck in her life, trying to find her happiness when everyone else in her life seems to be in a pretty even space.

The film follows Gloria (Julianne Moore), a divorced real estate agent with two grown up kids and has been living on her own for more than a decade. Her life is pretty easy going. She goes to work, then sees one of her kids, hangs out with her friends, and then when she is free, she goes dancing at a singles bar in downtown Los Angeles. Some nights she goes home with someone, some nights she goes home alone to her home with a cat that keeps breaking into her home and sleeping in her kitchen. One night at the bar, while dancing with another man, she locks eyes with Arnold (John Turturro), and the romance between the two begins. Gloria and Arnold’s chemistry is instant and the relationship blossoms over the course of a couple of months. But just like in any relationship, there are hurdles and obstacles that shape and test the relationship, leading to Gloria having to come to some harsh decisions about her life.

While the story of Gloria Bell sounds good on paper and when describing it within this review, it was a really hard film to attach to considering the pacing that Lelio brings within his direction and script, which is an American remake of his own film Gloria from 2013. He takes his time slowly setting up Gloria, with character moments that show you her life and how the people in her life treat her. The strangers in the bars that she dances with treat her better than her own kids, who treat her like garbage when she has done nothing wrong. The film meanders through the first twenty minutes of this movie till Arnold shows up and gives Gloria someone that actually likes her and treats her with the amount of love and respect that she deserves.

Then the next twenty minutes of the film play off like something out of Richard Linklater’s Boyhood. We get snap shots of Gloria and Arnold’s relationship, leaving us as an audience wanting more out of those scenes because they are the best parts of the movie because it is the right amount of joy and mystery within a first time relationship. While there is joy in the scenes because the actors are so good together in the film, they are incomplete for me. Thus when the big turn in the middle of the films comes, it kind of felt weird and out of place for me and then remaining hour of the film, I felt like I was on a roller-coaster trying to connect back to Gloria and by the end, I just couldn’t get back into her story one hundred percent.

The performances by Moore and Turturro are pretty solid for two actors that I would love to see work together in another film that uses them better. The supporting cast of Michael Cera, Brad Garrett, Caren Pistorius and Sean Astin are mostly nothing but mean characters that felt like they should have been in another movie hating on someone that is a bad character instead of Moore’s Gloria who is generally a nice person. The only person that gives a good performance from the supporting cast, and isn’t written out of spite, is Holland Taylor, who plays Gloria’s mother and takes care of her through all the rough things going on to Gloria through the run time of the film.

The production design, editing and cinematography feel like they are made for a much happier film. You must think that I don’t think romantic films can be sad, that’s not true, they can be sad, they just don’t have to be mean. From viewing this trailer in front of every film I saw for the last four months, I thought this movie would be a delight and departure for Lelio, who gave us Disobedience last year and A Fantastic Woman in 2017. I thought the lighter side of him would come out, and it does for twenty to thirty minutes, but the rest of the film feels out of touch with those bits and thus why I was disappointed by the end result. Humans shouldn’t be alone and deserve all the happiness in the world, and Gloria Bell deserved much more happiness behind the camera and on the page to make this something truly worth dancing for.