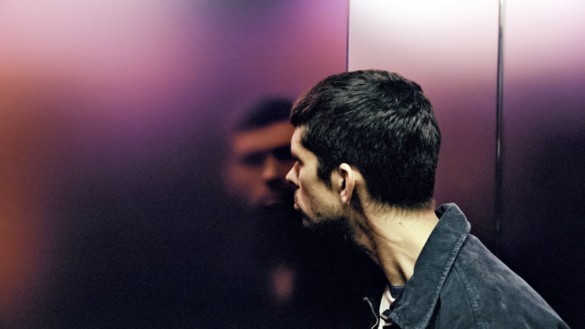 Synopsis: A man goes on a bold and reckless journey of self-liberation in the city of London.

British director Aneil Karia makes his feature length debut with this tense, at times unbearable, tale of a man’s breakdown happening in real time, featuring a phenomenal performance from Ben Whishaw. Bearing more than a passing resemblance to the work of the Safdie brothers (much of Uncut Gem‘s frantic, unnerving energy zaps relentlessly through this), although somewhat grittier and more grounded, Surge lives up to its name, ensuring the audience will be breathless throughout.

Joseph (Ben Whishaw) is an airport security guard, deeply depressed and clearly unhappy with his life. He mills about in the background of his job, glumly asking travelers to consent to pat downs or bag searches. The minutia of day-to-day life is represented in a fairly grim way here. As the cavalcade of people stream past Joseph, he barely notices or looks them in the eyes, even as he’s interacting with them. The only ones who stand out are the crazy ones – a foreign man who doesn’t speak English and is clearly terrified when Joseph asks to search him; a mentally ill man who seems to hear voices and asks Joseph to join him on a journey, before frantically running through the airport with police in tow – and these rattle Joseph’s already fragile mental state. On top of this are his parents (Ellie Haddington and Ian Gelder) with whom he has surreal, often jarring, interactions with – culminating in Joseph storming out of the house after he accidentally chews off a piece of glass (oh yes, and he has a strange habit of chewing random objects – forks, glasses, you name it). In his personal life, Joseph doesn’t sleep and harbors secret feelings for his co-worker Lily (Jasmine Jobson).

All of this combines in a bizarre moment where Joseph finally succumbs to the pressure and suffers a mental breakdown in the middle of work. It’s a raw, shattering scene showing a man cascading down to his lowest point amid the baffled reactions of his coworkers who didn’t pay enough attention to see this coming. From here the tension only ramps up and up, as a mentally frazzled Joseph stalks the streets of London in a fit of blinking, chattering, crackling energy which makes him increasingly unpredictable. His state of hyperactivity and synaptic impulsion makes for very difficult viewing as Joseph is compelled to embark on a ridiculous crime spree across the city.

Ben Whishaw gives an incredible performance as Joseph, the walking personification of live nerve endings fizzing out in the open. He is nothing less than totally compelling throughout, even as the plot begins to falter and Surge loses its way a little, which is where the problem lies. For as much as Surge is an excellent study of social behavior and the hidden aspects of mental illness, it can’t sustain the entirety of its runtime. The plot is paper-thin and relies mostly on the performance of Whishaw, which will wear out even the most ardent of viewers after a fashion.

Interestingly, there is no real concern to diagnose or even overtly explain Joseph’s mental condition. Those early airport scenes and what little we know of his personal life paint a picture of a hauntingly lonely man, but the psychology of his descent is never really explored and so what we’re left with is something akin to watching a car rolling down a hill, aware that it’s bound to crash into another car sooner or later. That helplessness is both a boon and a fault in Surge; your mileage may vary depending on how willing you are to watch someone decline without any possibility of help or redemption. It can be exhilarating in the sense that you truly don’t know what’s going to happen next – indeed Joseph has that habit of zigging when you think you’ve worked out where he’s going to zag – but also stress inducing if you’re not of that mentality.

Karia is no stranger to this style of filmmaking. His short film, 2013’s Beat, bears a similar conceit and even shares Ben Whishaw in a similar role. You get the feeling Karia may have been better focused on short films, as they could contain the energy here for the required pace of the movie. As it is, Surge starts to lose some of its focus towards the later stages.

The camerawork – done by DOP Stuart Bentley – deserves mention for its participation in escalating the tension. Long scenes unfold where the camera is literally tracking Joseph from behind as he bounces from one place to the next. It gives a feeling of trying to catch up with this neurotic energy, as you bound just behind the action, catching up only as the next development is underway. It’s a deeply compelling style but also means in static moments you’re often reeling because the pacing doesn’t so much slow down as come to a sudden stop. At one point Joseph – frantically searching for £5 so he can buy a HDMI to impress his coworker Lily – decides to rob a bank with only a piece of paper and his hand in his pocket to induce the idea he has a gun. It’s a mesmeric scene, fully loaded with tense anxiety, but then not much later he’s posted up in a posh hotel room, tearing strips off the furniture and ripping into the covers so he can cocoon himself like some demented caterpillar. To go from one frenetic moment to a brain numbingly unhinged one is jarring and confusing.

Surge is worthwhile viewing for the state of tension it can inspire in an audience. It may not be able to sustain that tension, and it’s plot fizzles to nothing by the end – but anyone who enjoys the manic formula the Safdie’s have perfected will likely find much to like here. And if nothing else, Whishaw is electrifying and worthy of your attention.