Movie Review: Ender’s Game, does it have the right moves? 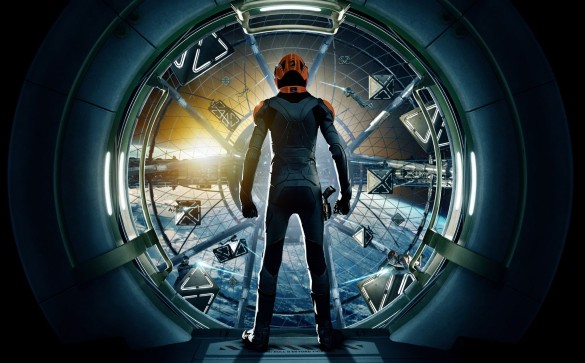 Synopsis: The International Military seek out a leader who can save the human race from an alien attack. Ender Wiggin, a brilliant young mind, is recruited and trained to lead his fellow soldiers into a battle that will determine the future of Earth.

DIRECTION
Gavin Hood is back at the helm for his first big feature since the atrocity that was X-Men Origins: Wolverine and I must say, it’s a huge improvement. Hood brings us the essence of Ender’s Game and the heart of the book along with some astonishing visual effects. His pacing is a bit quick and we do lose out on some of the intimacies that made Ender’s Game, the book, so incredible. However, the tone Hood sets is familiar and the visual layout is nothing short of amazing. The first scene we get an intense glimpse of an invasion and from there Hood never lets up on the gas pedal. Hood does a good job of letting his actors take control of the characters and we see the main skeleton of the story come to life. There are some main elements that make this story stand out and the execution of that wasn’t perfect but it’s good enough for what Hood is trying to do. Overall, while we lack the complexities from the book, the film visually displays the main themes and story well. Great comeback for Hood.

SCRIPT
The part where Hood stumbles is within the script itself. The script had many, many re-writes and with the help from an “uncredited” Orsen Scott Card, Hood and the studios finally got his blessing on the story. Just like any other movie that’s based on a book, you can’t get everything into a two hour movie and it’s no different here. But Hood does manage to get the main course and themes that defines Ender’s Game. The story is the usual arch of aliens invading Earth but from there the story becomes much different than the usual sci-fi movie. The world sets up the International Fleet that will protect Earth at all costs. This includes taking the youngest and brightest minds and developing them to be the best commanders for war. Ender Wiggin just happens to be the brightest of them all. For the film, we don’t get the backstory of his family much and we lose out on a crucial relationship between Ender and his sister Valentine. But through voice overs and emails, we get some sense of it. There are heavy themes that are explored really well, including the morality of using children for war, committing genocide, guilt and doing what’s right no matter what the situation is in front of you. It’s not as complex as the book, but we get enough of it to make the movie work. Overall, Hood give us the outer shell as we lose out on the rawness and emotional weight that makes the book amazing. And the quick pacing leaves us with just the main course, but it’s good enough that you still leave fully satisfied.

PERFORMANCES
Harrison Ford as Colonel Graff was really good. As someone who’s short, a war veteran and someone who’s lost his wisecracking abilities, Ford was the perfect cast. Especially given the direction he takes characters now-a-days, he handled it really well. Let’s just say his Han Solo days are way behind him, but he’s effective here for who the character is. Asa Butterfield was slow to start and is hard to believe as this young hero at times but he really comes into his own, especially toward the third act of the film. The quick pacing doesn’t help him a whole lot since he has to win you over really fast with almost no backstory. It’s a difficult challenge but overall he does a good job. You gotta love Viola Davis. Davis plays the more emotional Major Gwen Anderson who battles with the morality of what the military is doing and brings a great presence. Do I ever need to talk about Ben Kingsley? Of course he’s good. His role is very limited and I can’t speak of his role much without giving away spoilers but he’s good. And Hailee Steinfeld is amazing as Petra and delivers that character as well as I would of liked to see from that character from the book. She was incredible and the chemistry she had with Butterfield was really compelling. On a quick side note, Moises Arias, whom I really loved in The Kings of Summer, does a pretty descent job playing Bonzo, who is polar opposite of his character in The Kings of Summer.

SCORE
Freaking Steve Jablonsky! I love, love Jablonsky and his score here is absolutely perfect. It’s not going to overwhelm you as a theme you’ll remember forever but it’s the perfect balance of intensity, theme and subtleness, which is exactly what this film needed. While the book is massively popular, it’s not the biggest franchise in the world yet and it didn’t call for a big, overpowering score. However, we do get some of that in the more intense scenes and it magnifies that intensity well. Some other scenes were more subtle and Jablonsky, who has experience in horror and comedy, is able to bring that range that’s needed for those scenes as well. Plus, he has some nice touches of Transformers in here which I personally love. It’s a great blend with many ranges that is perfect for what Ender’s Game needed.

FINAL THOUGHTS
Ender’s Game is a fun, dramatic look that is different and unique for most sci-fi movies. While it follows the basic trope of alien invasion, it quickly turns into a moral dilemma that involves some heavy and complex themes. And while Ender’s Game, the movie, doesn’t quite hit all the intricacies of the book, it gets the main pieces enough that you can enjoy the film for what it was. If you like the book, you will have some issues with it but you can still enjoy it. It actually could of been interesting in IMAX or 3D too.