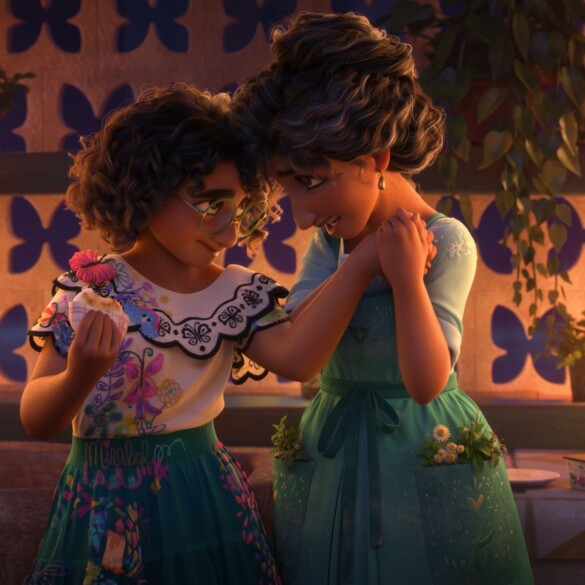 Synopsis: A young Colombian girl has to face the frustration of being the only member of her family without magical powers.

Earlier this year, I wrote an op-ed about family animated films, and why they shouldn’t have villains. So when I watched Encanto, and found out that it didn’t have a typical antagonist, I knew I was in for a treat. Encanto was released in late November this year, and was directed by Jared Bush, Byron Howard, and Charise Castro Smith. It centers on the extraordinary Madrigal family, whose special gifts have enabled the village of Encanto to thrive for three generations. Each member of the family has a special gift, except for Mirabel. However, when the magic begins to fade, Mirabel must find the source of the problem, and find a solution.

The story of Encanto is special to me because of how human it is. Mirabel may be our central protagonist, but she isn’t alone in suffering from the pressures placed upon her by the family.  Every Madrigal has been given a gift, but with it comes the pressure to be perfect. Luisa’s song, “Surface Pressure,” puts it clear as day: “I’m pretty sure I’m worthless if I can’t be of service.” This is a film that lets each character be real. There isn’t an easy solution to the family problem, because it’s built on their complex relationships and fears. This thematic complexity is delivered through simple lyrics and by allowing each character to share their perspective. Its message that gifts don’t define you will resonate with audiences, and makes Encanto stand out among the animated films, not to mention the many musicals that came out this year.

The story isn’t the only well crafted element of Encanto. The cinematography by Alessandro Jacomini, Daniel Rice, and Nathan Warner is the lifeblood of Encanto. While I have been impressed with Disney Animation Studios recent releases (Raya and the Last Dragon, Frozen II), none have the fluidity and precision in their cinematography that permeates Encanto. No shot feels static or dull. Rather, the cinematography has an energy similar to a Spielberg one-er, where the camera moves with characters and frames them expertly without needing to cut between shots. This forward momentum is enhanced by Jeremy Milton’s editing, as scenes flow from one to the next with ease.

And speaking of recent Disney Animation releases, the animation style of Encanto cranks the individuality slider up to eleven compared to previous entries. Encanto shares much of the lighting design and texture detailing that permeated Frozen II and Raya and the Last Dragon. But what sets Encanto apart is the character design. Every person in the Madrigal family is distinct in their expressions, movement, and shaping. And these designs immediately convey who these individuals are. Dolores’ twiglike stature and large eyes are reflections of her timid attitude. Mirabel’s bushy hair and glasses show just how unexceptional she is. And Luisa’s massive build contrasts perfectly with her facial expressions, highlighting the pressure that is placed upon her in a physical, real way. Even the magic house, Casita, is given a personality through the way bricks and doors move. That attention to detail is creative and mesmerizing to watch.

Speaking of the characters, the vocal performances are some of the best in the business. Stephanie Beatriz, known for her work as Rosa in “Brooklyn Nine Nine,” brings Mirabel to life. Her performance brings Mirabel’s emotions to the forefront, making the forced happiness, curiosity, anger, and longing audible to the audience. It’s a completely different performance to her television work, and it creates a sympathetic lead for the film. The supporting cast is well established as well; with John Leguizamo, Jessica Darrow, and Maria Cecilia Botero creating especially memorable performances in their roles as Bruno, Luisa, and Abuela Alma respectively. Every cast member taps into the pressures set upon their characters in subtle ways that add depth to each performance. And when those pressures are revealed, the film accentuates those emotions through Lin-Manuel Miranda’s musical numbers. His signature rapid fire lyrics are on full display in Encanto, diving deep into the feelings and history of the characters with ease. Plus, the vocal performances and animation work together emphasize these ideas as well. Each character has a signature rhythm to their singing that personifies their characters. The film fires on all cylinders in these moments, bringing together the vocal performances, story, editing, animation, and cinematography to reveal the thoughts and feelings of these characters. Lighting and environmental changes are used to unleash the charged emotional states of the characters. All of these elements blend together to create intoxicating musical numbers full of emotion and energy.

But it’s not simply Lin-Manuel Miranda’s musical numbers that shine in Encanto. The score by Germaine Franco propels the story forward from moment to moment. It injects the film with a magical vibrance at each and every point of the film. It accentuates the emotional exchanges between Mirabel and other family members, and enables the film to feel like a true musical despite having only seven numbers.

Meeting a new family can be a daunting task, and the Madrigal family is no different. But Encanto’s direction and intimate story makes it easy to keep track of who’s who, what’s what, and why each member matters in the family. It’s a film that revels in empathy, and in breaking the rifts that form between generations. As I said at the start of the article, it’s one of the best of the year, and a film for the entire family.