Movie Review: Elysium has fun action but lacks in script 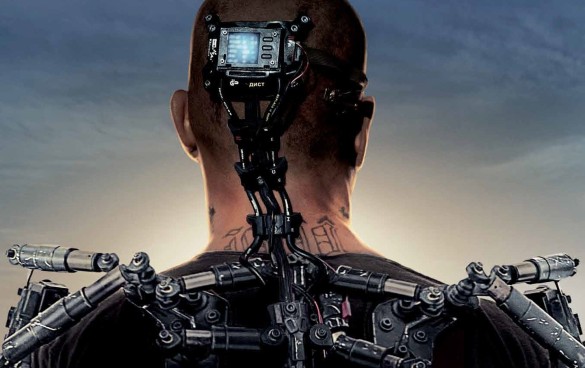 Synopsis: Set in the year 2154, where the very wealthy live on a man-made space station while the rest of the population resides on a ruined Earth, a man takes on a mission that could bring equality to the polarized worlds.

DIRECTION
When a movie is written and directed by the same person it usually translates to the screen really well as he/she knows the vision and the story intimately and can bring that to life the way they want. However, sometimes it doesn’t always work and that’s the case with Neill Blomkamp’s Elysium. His direction for the film is incredible and it’s as bit as good as his first film, District 9. The camera work is incredible and makes the action a ton of fun. While there is some shaky cam, the use of slow motion and unique maneuvers makes the action really enjoyable. The robots, who are used as policeman in 2154, are used fantastically and are really believable in this world. The visuals are stunning and absolutely incredible which also makes the aesthetic real and fun to see. Some of the violence is graphic but adds a nice touch to the setting that we find ourselves in. The big problem Blomkamp has is the performances he gets from a couple of main characters and a missed opportunity to explore Elysium. It’s a fascinating world that we never get to know. Overall though, you can appreciate the visuals and all the action that this movie has to offer.

SCRIPT
As I mentioned, sometimes it doesn’t always work when the same person writes and directs a movie and this is where this film loses itself. The film has a very strong message and stance on healthcare and the entitlement that everyone has to it but that is not the part that makes the film suffer. In fact, I can appreciate that Blomkamp takes a stance and doesn’t make it subtle and makes it fun with the visuals and action. However, it’s very conventional and predictable on every level. More so, the main villains aren’t interesting and add nothing to make the story exciting, especially since we don’t really get to know what Elysium is all about. The main story is dull, done before and adds nothing new in terms of motivations and themes. Even though the healthcare part of it is really interesting, it has nothing to do with the villains, their schemes and what they are trying to do. Again, a missed opportunity to do something with an interesting issue that Blomkamp is obviously making a big deal out of. Matt Damon and Alice Braga’s story is explored well and is something you can get into which saves the movie in some ways. Of course it’s been done a million times before but that’s okay if it’s interesting and engaging, which that part is. Damon’s character is also a great anit-here who isn’t on a super level but is good enough to get the job done. Should this script have centered more about the healthcare issues and around Elysium itself more, this film would have really been great. But since it took a Hollywood route in the end, it’s nothing more than a good action movie.

PERFORMANCES
Matt Damon is amazing. He always is and he knows how to play roles like this which makes this film fun. Damon is great at action and is completely believable as our anti-hero who almost never gets it right until the moment calls for it. Alice Braga is also pretty good at the girl who is trying to save her little girl, who is dying with leukemia and is in need of Elysium’s healthcare. She also has a strong relationship with Matt Damon and while their chemistry wasn’t the greatest, it was enough for what this movie ended up being. I can’t believe I’m about to say this but Jodie Foster is terrible. Yep, it’s true. Other reviews have said it and I have to confirm it. She’s bad and her character is ridiculous on almost ever level. It’s almost laughable in some ways with some of the accents she was trying to pull off. To go along with that, Sharlto Copley, whom I love is also not very good. His character is over the top, cheesy at times and fits the ridiculousness that Fosters’ character is as well. The two of them add nothing to this movie which is hard for me to say since they are both actors I love. However, Copely’s action pieces make up for some of the bad dialogue he delivers which is a little redeeming. The other supporting roles are fine but none of them stand out in this film, even William Fichtner who normally is a fantastic in a supporting role. This is Damon’s film from a performance perspective and he gives a fun and passionate performance.

SCORE
In a movie that ends up being mostly conventional and Hollywood, it demanded a score that fits that theme. Ryan Amon’s score does just that and I’m okay with it because a lot of the times those scores are pretty great. Amon’s score is fun, energetic and is fitting for the direction this movie takes. It’s quiet when it needs to be but it’s mostly a in-your-face score which is pretty fun. The main themes are great and it’s one you can enjoy outside of the film.