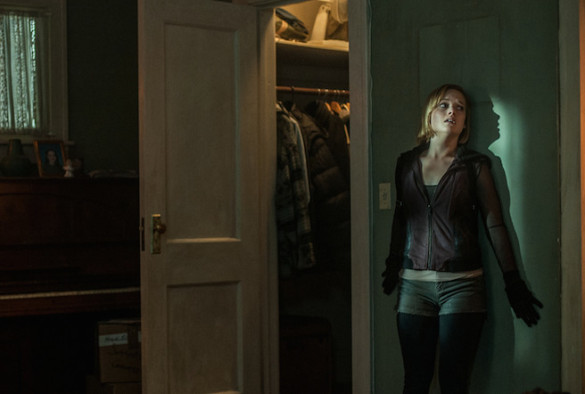 Synopsis: A group of friends break into the house of a wealthy blind man, thinking they’ll get away with the perfect heist. They’re very wrong.

My top movies so far this year are Green Room and 10 Cloverfield Lane. Both of these movie are beautifully acted and directed, and they have to be since they take place primarily indoors. Having a film take place in one primary location is a huge challenge because you need to keep the audience entertained for the entire running time. Thrillers like these I find enjoyable because it creates that psychological horror which to me is much more effective than your typical films in this genre. One of the reasons that Green Room and 10 Cloverfield Lane are successful is because they both have a strong antagonist and a strong heroine. I can’t say this enough, but I am all about strong female characters, and I love how more female characters are in roles that are usually reserved for men. Green Room has Patrick Stewart and Imogen Potts and 10 Cloverfield Lane has John Goodman and Mary Elizabeth Winstead. Don’t Breathe is the next great thriller of 2016 and despite its flaws should be considered one of the best horror films of 2016. Don’t Breathe is directed by Fede Alvarez (Evil Dead (2013)) and stars Jane Levy, Dylan Minnette, and Stephen Lang. Like Stewart and Goodman before him, Lang provides a bone-chilling performance as The Blind Man.

The plot is pretty straightforward as it tells the story of three Detroit teenagers, Alex ( Dylan Minnette), Money ( Daniel Zovatto) and Rocky (Jane Levy) that make a living breaking into people’s homes and stealing only valuables, not cash. Once learning about a blind military vet winning a huge $300,000 cash settlement, and figuring he’s an easy target, the trio invade the man’s secluded home in an abandoned neighborhood. Once inside they quickly learn that the blind man does an excellent impression of Frank Castle and Matt Murdock.

Although the plot is pretty straight-forward (and I may have already said too much), movies like this cannot be spoiled because the acting, cinematography (in particular the effective camera angles) and the intensity of the situation is something that needs to be seen to be believed. Fede Alvarez pays homage to several classic and recent thrillers including The Silence of The Lambs, Jaws, and Cujo. Alvarez’ camera is set up perfectly in almost every frame.

It’s important to mention that this film is more visually driven than anything else as the film probably has a total 25 minutes worth of dialogue, but trust me, the movie really takes off as soon as the blind man wakes up. I have been giving a lot of praise thus far but there are a few issues in the plot that are bigger than the Detroit ford buildings.

Jane Levy needs to be cast in more films asap as she was absolutely phenomenal as Rocky. I think Warner Bros. needs to give her a call because the part of Pamela Isley needs to be fulfilled in the DCEU. Stephen Lang delivers a home-run performance as The Blind Man and between these two performances are in line with Green Room and 10 Cloverfield Lane’s female-male duo.

Don’t Breathe is much better than I expected and is a beautifully shot and directed film that will give you chills for most of the running time.


Hear our podcast review on the Next Best Picture podcast: