Movie Review: ‘Dolemite Is My Name’ sees Eddie Murphy give his best performance since ‘Dreamgirls’ 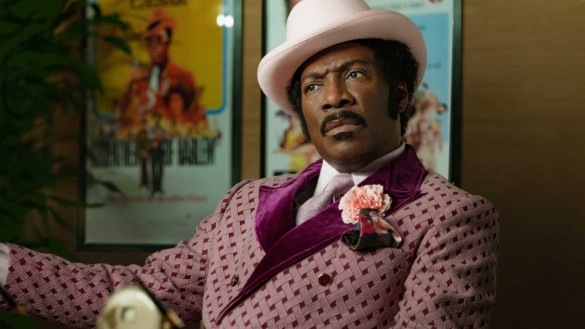 Rudy Ray Moore, best known as Dolemite, was a walking contradiction in the most classic ways. When he was on stage, he was a loudmouthed comedian that turned the stage of comedy clubs into something raunchy and spectacular. When he was on his own, he dealt with self-doubt and the crippling fear of failure that his father raised him with. All of this makes Eddie Murphy an interesting and excellent choice to play Moore in Craig Brewster’s Dolemite is My Name. Murphy hasn’t been in much of the public eye since his one-two punch of Dreamgirls (his best performance) and Norbit (his worst), popping up on occasion to deliver mediocre films like 2016’s Mr. Church. His performance here is his best since Dreamgirls, if not ever.

Rudy Ray Moore is a many-talented man who attempted to break into Hollywood by any means necessary. Moore spent time doing comedy, singing, dancing and anything inbetween, all to no avail. We see him for the first time while he’s working at a record store, trying to get an in store DJ (Snoop Dogg) to play his records. All of a sudden, a regularly alcoholic (Ron Cephas Jones) comes in to ask for change, talking of “Dolemite, the baddest motherfucker who ever lived.” Moore gets to thinking and realizes that some of those old tails of Dolemite could help build up a larger than life persona. He gets to writing, performing, and recording the material he’s written as Dolemite. He soon realizes that what he wants to do is make a Dolemite movie, including the things that everyone wants to see in a movie: “some titties, some funny, and some kung-fu.”

Filled out with a cast of lovable outcasts, Dolemite is My Name calls to mind other “outsiders make a movie” movies such as Ed Wood and The Disaster Artist, going so far to even be written by the duo behind the script of the former. What holds Dolemite is My Name up above the rest of the genre is that it doesn’t try and reinvent the wheel, but every individual component here is done with extra care. The writing is seriously funny, running with excitement and a one punchline a minute quota. That giddy feeling originates with the script, but it’s performed perfectly by a wide cast, ranging from Craig Robinson’s Ben Taylor, a wonderful soul singer, to Keegan-Michael Key’s Jerry Jones, a nebbish self-serious screenwriter. Each character wears a series of beautiful costumes, designed with period accuracy and love by legend Ruth E. Carter. Additionally, Brewster has never been a flashy director, but he makes the most of period detail to sustain the film. Every component here is about twice as good as it had to be, which gives new breath to a genre that’s been overdone.

Everything here comes back to Murphy’s performance. It’s the sharpest and funniest he’s been in ages, but it’s also his sweetest role in years. Motivated by deep self-doubt, Rudy Ray Moore is a fascinating character, but Murphy develops him with a bittersweet touch, allowing that doubt to come through. He anchors the film, letting a human feeling seep through the outrageous characters and comedy. Without him, Dolemite is My Name could be deeply average, but he elevates the movie beyond a “follow your dreams” cliche message, making it a lovely film about “fuckin’ up motherfuckers” and succeeding despite your insecurities.