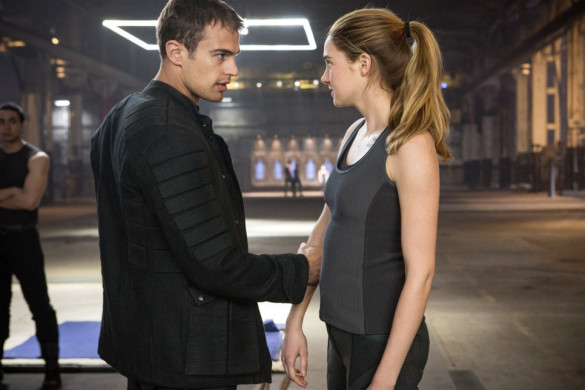 Synopsis: In a world divided by factions based on virtues, Tris learns she’s Divergent and won’t fit in. When she discovers a plot to destroy Divergents, Tris and the mysterious Four must find out what makes Divergents dangerous before it’s too late.

INTRO
Aeriel shots of a futuristic yet decaying Chicago. Music playing in the background. Residents are divided into different factions: Abnegation, Amity, Candor, Dauntless and Erudite. Beatrice goes in for her Aptitude test to determine the fact she best fits in. Her results are inconclusive and she is told she is suited for more than one faction. Beatriz is told she is “Divergent”.

DIRECTION
Reviewing these types of films is always a challenge for critics, as we are not the target demographic. Earlier, this month I placed Divergent on my worst list for March because of the failure of movies like Mortal Instruments, Vampire Academy and The Host. Divergent to me is not a perfect film by any means but it does a lot of things well. Most of the problems with it lie on the director Neil Burger and the screenwriters Evan Daugherty and Vanessa Taylor, for difficulties translating from book to screen. Divergent runs about 2 hours and 19 minutes, yet only get a brief background on the circumstances surrounding the Prior family so when things start happening, it does not really elect a response from the non-book readers. The film seems to dwell too much into the plot as our main character is able to figure out everything that she needed to and resolve the issues all before the credits end. I would have wanted more background on maybe why the cities are divided anyways as well as why the city is decaying. If you are going to have a running time of 140 minutes answering a few of this would have been great, if not then cut the film down by a few minutes. The production design could have been better as this Chicago does not really seem to keep up with the emotion the film is trying to capture. Most of the reviews for this film are negative because it is compared too often to The Hunger Games. I understand the comparison, but every book or film has some idea that was rooted from something else. I think Divergent is off to a great start primarily on the strong roles of Shailene Woodley and Theo James and all other issues such as plot gaps, production can all be fixed in the next installment.

SCRIPT
In the quick opening, we get a background of the various factions: Abnegation, meant for the selfless; Amity, meant for the peaceful; Candor, meant for the honest; Dauntless, meant for the brave; and Erudite, meant for the Intelligent. Beatrice (Shailene Woodley) and her family are currently in the Abnegation faction. Beatrice knew she never quite fit in with her faction’s selfless nature and when she takes her aptitude test we realize why she does not solely fit into Abnegation. When Choosing Day arrives, both Caleb (Ansel Elgort) and Beatrice shock the entire community when they choose new factions. Caleb selects the snobbish Erudite faction, led by the power-hungry Jeanine Matthews (Kate Winslet). Beatrice, chooses the Dauntless, which for some odd reason, they run everywhere and dress like a mix between a S.H.E.I.L.D agent and a Hot Topic employee. Once she starts initiation, Beatrice then chooses the new name “Tris”. The vast majority of the film takes place in the Dauntless faction where the initiates have to go through extensive training and hand-to-hand combat to determine who has what it takes to be Dauntless. And what is a young adult novel without a love interest? Four (Theo James) is the man takes a liking to Tris, giving her looks that only a R. Kelly song could have given justice to. Four looks after her, especially from a dull Jai Courtney, who plays Eric. In between the Nicholas Sparks style romance, a power struggle is deepen between the Erudites and Abnegation, and Tris soon figures out why being a nonconforming Divergent could prove so perilous.

PERFORMANCES
Right away we can already get a Hunger Games sense from this film and as it goes along the same themes of corruption and government rebellion from The Hunger Games also ties in to this film. The similarities do not stop there as both young adult novels have strong female characters. Much of the success of Hunger Games is the strong character of Katniss, backed by the terrific acting of Jennifer Lawrence. Divergent’s female protagonist is Beatrice Pryor, later known as Tris, played by the lovely and talented Shailene Woodley. Woodley did an outstanding job in The Spectular Now, and many will wonder if she has the on-screen presence to carry a film of this magnitude. Most critics are quick to bash her performance but I on the other hand, think she did a fantastic job and every scene with her was never a dull moment. Woodley had natural chemistry with Theo James and I admire her for getting in there and not getting afraid to get her hands dirty. We know all about Katniss’ story, but what she does in Divergent is special. What Divergent does well is having Tris, actually use hard-work and dedication to move up the ranks in Dauntless. Besides Woodley and James, Miles Teller, although brief, delivers a nice change of pace performance as Peter. Zoe Kravitz, Ansel Elgort, Maggie Q, and Christian Madsen all do good work as the various people who either help or harm Tris as she tries to figure out things.

SCORE
The score by Junkie XL, works well for this type of film and playing songs be Ellie Goulding fits perfectly with the film. Junkie XL has some pretty good work coming out lately and this isn’t any different. Good stuff.

FINAL THOUGHTS
Divergent will learn from its mistakes for the next film, but I am all in on this series. Woodley, I am glad that you delivered in this role and I think Tris could beat Katniss is a test of wills. Divergent, I am sorry that I wrote you off before giving you a chance. The only question left to be answered is if this film can surpass its 85 million dollar budget. I am sure the fan base is big enough but for every once else that is unsure I hope my review can help you decide to see this film because it is a highly enjoyable film that Twilight should have been.