Movie Review: ‘Come True’ Invalidates Itself with a Foolish Ending 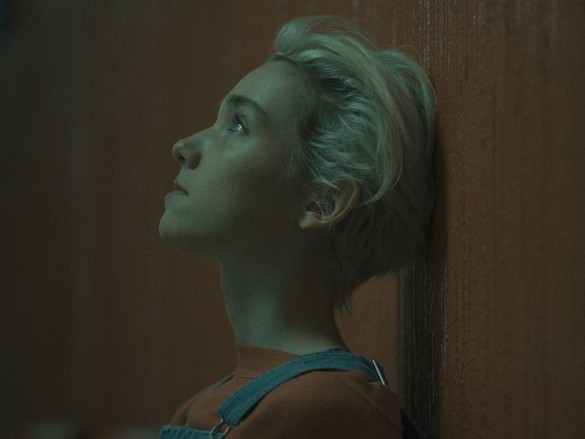 Synopsis: A teenage runaway takes part in a sleep study that becomes a nightmarish descent into the depths of her mind and a frightening examination of the power of dreams.

Come True opens with a lot of promise. Right away, we are led through a ghostly wasteland populated with shadowy figures and mutants. With every passing second, the terrain steadily grows more severe and… nightmarish. It’s clear that we are not in “the real world,” but rather a monstrous dreamscape. We return to this place repeatedly throughout the film because it’s the setting for our protagonist’s recurring nightmares. The production value invested in these sequences is impressive. Anthony Scott Burns’ choice to propel the audience headlong through this macabre environment over and over again evokes feelings of wonder and excitement—an eagerness to learn where the story is going, what horrors the final revelation will unleash. He set himself up by doing so, though. Because the conclusion of Come True does not deliver. Or work. At all. In fact, the ending sours everything that led up to it. And it’s an insult to the audience, too.

Dreams play a big part in Come True. Julia Sarah Stone stars as Sarah, a high schooler who’s somewhat estranged from her family, and we don’t know exactly why. When she can’t crash at her friend’s house, Sarah sleeps on a playground. She also has terrifying nightmares, and we don’t know exactly why that is either. One day, she happens upon an ad looking for candidates for a paid university sleep study. For Sarah, this opportunity resolves two conflicts: having a reliable place to sleep for eight weeks and possibly understanding where her mind goes when she’s unconscious. Stone is fantastic. She has a talent for drawing the audience in with an effortless relatability, then captivating us with an understated yet layered performance. Her pilot-light portrayal of Sarah matches Burns’ long-fuse directorial approach to the script.

Burns is not going for haha-made-you-jump horror. Instead, Come True is more cerebral and meticulously paced. Burns presents himself as a curious, scientifically-minded storyteller. He wants to get at the heart of sleep and the nature of dreams. Perhaps for this reason, Come True offers few answers while choosing to live in an ambiguous zone, to a fault. Burns excels at getting us to lean in, nudging us to connect what few dots there seem to be. All the while, he entices the audience with strong aesthetics to keep our eyes engaged. Our ears, too. The synth-electronic score practically pulsates, and the string instruments woven into it give it a timeless intensity. So with the audial and the visual so beautifully married, it’s an absolute shame that the narrative climax is so utterly disappointing. And stupid.

Come True is about dreams. So, as a cinephile familiar with all the cliches, I braced myself early on just in case I was about to get that ending. You know the one. And well… the movie doesn’t quite end that way. It somehow ends worse… In the final frames, we learn something so asinine that I, as a viewer, felt disrespected. With this ultimate reveal, Burns completely upends everything. He delegitimizes the entire framework of the film. I reckon that his goal was to re-contextualize the story with that sorry excuse for a twist, but he neglected to lay the foundation for it. There are some breadcrumbs, I suppose, if you dig for them, but who wants to put in work after receiving a middle finger?

And it’s all too bad because I was totally along for the ride for the first hour or so. The first 60 minutes of this 100-minute movie have so much going for it. On top of the stunning VFX work on display in the dream realm, there are a couple scenes set in the real world that are genuinely chilling as well. In what is perhaps the best sequence in the movie, another sleep study participant halfway awakens from a night terror only to discover that a sinister presence from their dream may have carried over into the room with them—and all the while the researchers just sit and callously watch the live feed from an adjacent room. Everything about this sequence comes together: the editing, the music, the lighting, the performances, the purposeful coldness, etc. It’s moments like this that exhilarate us and keep us anxious to learn what will come next, how this tale will conclude… But, unfortunately, Anthony Scott Burns chose to end Come True with a lazy, fatuous twist-for-the-sake-of-a-twist affront to everyone who’d just given him 100 minutes of their time.