Movie Review: ‘Cold Pursuit’ flips the script on what a Liam Neeson film is supposed to be 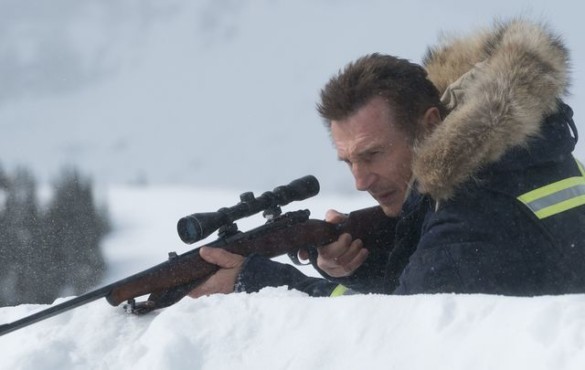 Synopsis: A snowplow driver seeks revenge against the drug dealers he thinks killed his son. Based on the 2014 Norwegian film In Order of Disappearance.

Maybe the biggest compliment I can pay Cold Pursuit is that the film wasn’t what I expected. In 2019, it is hard to imagine anything beyond a cookie cutter construction of a film that includes both the words “revenge” and “Neeson” in the synopsis. Comparisons to the Taken franchise, which have come define Neeson’s on-screen persona for the last decade (despite great, meditative performances in more ambitious films like Silence and The Grey), are inevitable, but the pleasant surprise of Cold Pursuit is how different it is than the traditional early-year action releases we are used to from Neeson. Cold Pursuit is a unique creature (once you get past the fact that it is a direct remake of the Norwegian film, In Order Appearance– which was also directed by Hans Petter Moland), in that it aims far higher than most of its Dump-uary counterparts, and certainly far higher than the film’s marketing implies. It is a very funny, very violent film that challenges the ethos of the films Neeson usually stars in, builds a surprisingly realized world, and packs a good amount of heart amidst its black comedy.

Cold Pursuit is the story of Nelson Coxman (whose name immediately goes into the Reynolds Woodcock Memorial Names That Immediately Make You Laugh Hall of Fame), played by Liam Neeson, a snowplow driver and newly anointed “Citizen of the Year” in the resort town of Kehoe, Colorado. When Nels’ son (Micheál Richardson) is murdered by a local gang, Neeson must do the thing that Neeson does- get revenge. The conceit of the film is truly that simple, which is part of the beauty. Making the film narratively straightforward allows Moland to work on the other, more interesting elements of the film. If the film was hamstrung by twists and turns, we wouldn’t be able to have as many funny exchanges, great visual humor, over-the-top moments of violence, or alarmingly sincere moments of contemplation.

The approach of Cold Pursuit, perhaps because it was made by a filmmaker with no prior experience in the Hollywood system, operates in a different sphere than the action films we are used to. It takes its protagonist seriously, but the world built around him is wildly heightened. We feel the weight of Nels’ son’s death, but he also carries around a badass, sawed-off rifle (a great choice that illustrates the little choices of this film that separate it from the pack; most films would use the classic sawed-off shotgun, but Moland knows better) and uses his snowplow like the truck driver in Steven Spielberg’s Duel. Cold Pursuit takes familiar images and plot construction and gives it a twist in sensibility to create a unique experience. The car (or plow) looks the same, but it is what’s under the hood that gives it its power. Despite its indulgence and bombast, it is the subtlety of the filmmaking that really makes it all click.

It’s not all perfect, though. The film’s main antagonist, Viking, is thin on the page and is played accordingly by Tom Bateman. This may have been a play on the typically weak villains of the genre, but in a film that transcends the tropes, it works against the film. His tone and attitude rarely, if ever, change and the dialogue doesn’t crackle like it does out of the mouths of other characters. Additionally, the great Laura Dern is completely wasted as Nels’ wife. The character would hardly be noticeable if it were played by a less interesting actress, but the fact that we are deprived of more of Dern’s services is very disappointing. I can’t help but wonder what this movie would have been like if Neeson teamed up with Dern, in some capacity, in his quest for revenge. We know Dern can elevate her energy and work in a darkly comedic world like this one (just watch Twin Peaks: The Return), I just wish Hans Petter Moland had given her the opportunity.

While those supporting players left a lot to be desired, most of the bit players are fantastic. Outside of having to worry about Nels hunting him down, Viking is now involved in a turf war (and eventually something far more complicated than that) with the Native American gang in Kehoe. Some critics have posited that the film’s presentation of the Native American characters is thin, but I thought they teemed with life and personality. They provide some of the best humor of the film and the depictions of their spirituality in relation to the rest of characters was a fascinating element that came out of nowhere. Tom Jackson plays White Bull, the stoic but dangerous leader of the Ute gang. He is the cool, calm yin to Viking’s over-the-top yang. The dichotomy established between Viking’s gang and that of White Bull adds another piece of food for thought as it relates to the traditional revenge thriller. I appreciated that the Utes were able to act in many of the same ways that the other characters are, not simply being shown as some sort of mystical presence (although that element is certainly present).

The C-plot of the film involves two police officers, played by John Dolan and Emmy Rossum (who desperately needs to be in more movies). The small-town cops seem out of their depth as they try to track down Nels on his violent spree in search of Viking, but Emmy Rossum’s character, Kim, is young and naive enough to believe that she can solve the case that Doman’s “Gip” has already put out of his mind, resigned to the idea that they will hand it off to the authorities in Denver. Their dynamic keeps the film afloat when the focus shifts. Kim’s arc is almost as fascinating as anyone else’s and Rossum brings a confidence and enthusiasm to the role that few others would have been able to.

With Cold Pursuit, Hans Petter Molland was able to take down the type of film we expected it to be and build up one that we truly wanted. He makes some stylish choices that make his vision more and more unique over time. The decision to break the film up using the deaths of characters as transitions by showing the now-dead character’s name (or, late in the film, about 20 names) along with the religious place of rest of their choosing as white text on a black screen works as both a way to make the deaths more impactful and a unique humor tactic.

But underneath all of the violence and dark humor is a story about fatherhood, and what fatherhood truly entails. The film is about a 3 fathers at war in the name of their sons. Each one of the men parents differently and each one has different rules when it comes to what merits sufficient revenge. Through Nels, we feel the heartache of losing a child, even as he bashes someone’s head into a snowplow. Neeson is one of our finest silent actors, which is something that both Martin Scorsese and the Coen Brothers have latched onto in recent years. In both of those films and in this one, that tool is used very differently, a testament to Neeson’s versatility. There is much more of a punch and more introspection than a film like Taken or The Commuter. Add to that a biting sense of humor and a singularity of vision, and Cold Pursuit might end up being one of the highlights of Dump-uary.