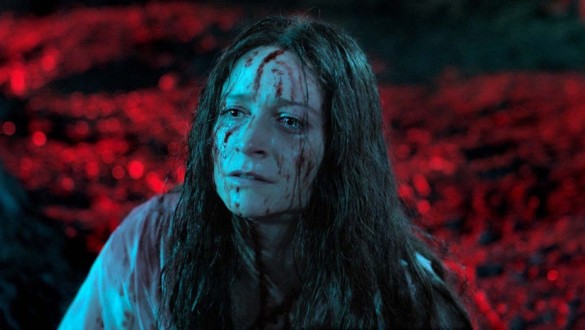 Synopsis: After viewing a strangely familiar video nasty, Enid, a film censor, sets out to solve the past mystery of her sister’s disappearance, embarking on a quest that dissolves the line between fiction and reality.

There’s still something really unsettling about VHS horror. The footage of gruesome violence is obviously ridiculous, pointedly operatic, and excessive, but the fact that it’s filmed so clumsily, with a grainy, low-fi resolution, makes the presence of the filmmakers more pronounced as they shakily push in on the scenes of bloodshed. The more you’re aware of someone behind the camera, the more you might think that this was a real scene of violent torture, which is an unpleasant, unshakeable thought. It suggests that a bunch of people got together, organized themselves, did something really horrible, but rather than covering their tracks and pretending it never happened, they capture it on film, preserving it for eternity, like they’re proud of the horror they committed.

It was a fear that permeated the consciousness of Britain in the 1980s in what was dubbed the ‘video nasties’. Due to a legal loophole, videos initially did not have to be reviewed by the country’s film classification board the BBFC before release. This meant that excessive and gory exploitation films started circulating without censorship, promptly conjuring a moral panic and extensive bans. In 1984, the Video Recordings Act was passed which imposed a strict review process for the direct-to-video horror, another step in the ongoing war to prevent the nation from being subjected to extreme nastiness.

Making her feature debut, director Prano Bailey-Bond turns her gaze to this era. Censor tells the story of Enid (Niamh Algar), a film censor who starts to fear that one film she’s assigned mirrors a traumatic memory of her sister’s disappearance as a child. Stolid and severe, Enid clearly sees herself as the moral protector of the nation, with no trust in them being able to consume shocking fiction safely. Her flat expression at work asks us a striking question about her character – she spends all day wondering how these horrific images will affect an audience, but exactly how has this desensitization to violence affected her?

But it’s not a question we ever get a well-explored answer to. In fact, the political ramifications of the ‘video nasties’ are never really investigated. The uptight ideals of the contemporary Conservative government, how they fumbled to exercise control over the twisted nature of these films, and the wave of “Think of the children!” panic that ensued is a brilliant context to explore a delusional descent into paranoia, but too often this context feels severed from the narrative of Enid unpacking her trauma.

There’s moments that show the reverse side to the restrictive values of the government, where we see the abusive elements at play in the production of exploitation films (with an uncomfortably lecherous producer played by Michael Smiley), and Bailey-Bond makes an effort to focus on the issues of gendered violence in these films. But setting and story could still be united in a more compelling way. One instance where they come together brilliantly is when Enid is harassed with threatening phone calls from enraged citizens over the films she let slip into public consumption, and the barrage of them pushes Enid that bit closer to madness. More story beats like this would help us be hooked by Enid’s mental journey.

While the ‘video nasties’ era feels at times like a backdrop to the story, it’s still an engaging one. It’s clear Bailey-Bond is fascinated with this time in British cinema and fills the film with tons of details to bring it to life. Some aren’t as effective, even drawing you out of the film (a newspaper headline reading “Crime on the rise, video nasties to blame” feels too on the nose), but usually, they delightfully encapsulate the ridiculousness of the censored films. A tagline for a monster exploitation film called “Beast Man” reads, “You’re probably going to die” is so devoid of subtlety or creativity that it’s commendable.

The horror films that prompt Enid’s fixative investigation have been created for the narrative, and while effort has obviously gone into replicating the style of cheap 80s trash, they definitely stand out from the real footage of ‘video nasties’. They lack the cobbled-together shabbiness, the corruption of both image and morals, that made the films creepy in the first place. But Bailey-Bond makes up for this by stylistically mimicking the flairs of low-budget horror in the narrative proper. Annika Summerson’s stunning cinematography shows severe dutch angles and a gorgeous array of bright colors ripped straight out of a Giallo movie, which contrasts well with the bleak, drab colors of 80s London. The dissolving of boundaries between fiction and reality is pivotal in understanding the confusion swirling around in Enid’s head.

But this mental deterioration, which is the main thrust of the film, ends up feeling a little lacking. It starts strong – the beginning of Enid’s panic is captured well with close-ups of her in already claustrophobic rooms. But as we progress, Bailey-Bond’s script, co-written with Anthony Fletcher, seems to skim over the details of the escalation, meaning the unspooling of Enid’s mind starts to feel a bit rushed and undramatic.

The final sequence is visually captivating and disturbing, but it just makes us wonder how much more effective it would be if the body of the story was fleshed out a bit more. While Bailey-Bond is clearly concerned with issues about the damage of unresolved trauma and how people can parasitically leech off this pain, the actual discussion of these issues is less fully realized.  The narrative and characters are engaging, and the look of the film is spectacular, but Censor can’t help feel a little slight for the shocking content of its story. Still, the pervading fear of violence spreading from a TV screen, of fake pain being a real pain, will linger after the film finishes, even if it could have been a bit more impactful.