Movie Review: ‘Blood Quantum’ survives on bloody instincts and not much else 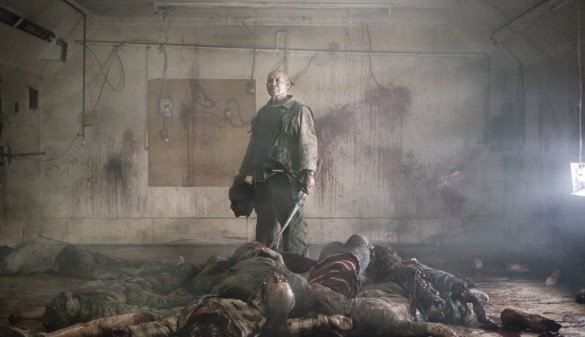 Synopsis: The dead are coming back to life outside the isolated Mi’gMaq reserve of Red Crow, except for its Indigenous inhabitants who are strangely immune to the zombie plague.

What was the last zombie movie that made a cultural splash? While 2009’s Zombieland is probably the last of the living dead that people really care about, it isn’t a flick that perfectly represents what can be so great about the genre. Zombie films can be a perfect combination of satire, commentary, guts and gore that audiences crave, and no one has made anything that really satisfies that in ages. In a bold attempt to resurrect the genre, indigionus filmmaker Jeff Barnaby’s Blood Quantum is a great idea for a movie. The movie itself? Well, it struggles and tries, but never really moves beyond a generic family drama that’s punctuated with some nasty and delicious carnage. Barnaby creates some distinct and fun images, but his script has some lofty thematic goals that he just doesn’t have the chops to tackle.

Opening with one of those distinct images, cinematographer Michel St-Martin captures an older fisherman gutting his sport with a thudding creepiness. Suddenly, the disemboweled aquatic animals start flopping around, somehow alive again. That fisherman’s son is Traylor (Michael Greyeyes), the sheriff of fictional Mi’gmaq reserve named Red Crow. That sheriff has two sons, Joseph (Forrest Goodluck) and Lysol (Kiowa Gordon), and we first meet both of them in a jail cell. That scene is where we also meet our first human zombie.  Realizing what’s hitting his area, Traylor busts his sons out of jail and then starts to take action. Throughout all of this, there is little tension built, leaving the audience to invest in vague family drama. In the first act, Barnaby’s direction feels awkward and basic with action scenes feeling choppy and the direction of actors even worse. Greyeyes is a rare talent that you’d be lucky to have in a movie, it’s odd how hard he’s straining to make these opening scenes work.

The riskiest thing Blood Quantum does is when it shifts six months in the future. At some point before that, you’ve realized that the Indigenous inhabitants of this area are immune to the invasion. Insert an inspired metaphor about colonialism here. But sadly, that thesis is all Barnaby has. You can have a great idea for a movie without the movie being great, and this is a perfect example of that. With the passage of time, we learn that Traylor and his family have bolted themselves in a grungy fortress while mowing down the zombies that come near. This is where the film gets to the most glorious gore (a certain scene on a bridge has a gleeful punchline), but there’s nothing deepening the characters here. The movie just asks us to care about vague squabbles via overacting.

Thankfully, Barnaby talent comes through in the final few moments of the movie. In a great scene on a boat, the foggy surroundings and beautiful compositions make an ending moment of hope and melancholy ring through. A great cast, creative incorporation of Mi’gmaq culture, and pretty cinematography can’t make up for the eventless slog that proceeds it though. Even though Blood Quantum was a solid swing at reviving them, zombies movies will have to stay dead for now.