Movie Review: ‘Bliss’ has Big Ideas But Comes Up Empty 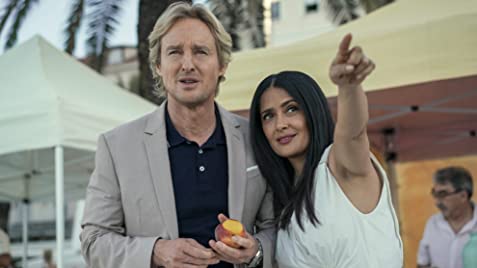 Synopsis: An unhappy man meets a mysterious woman, who tells him that the world around him is a simulation.

When I saw that a new film starring Owen Wilson and Salma Hayek was arriving on Amazon Prime this weekend, I assumed it was a new romantic comedy and did not think much of it. Then I discovered that it was a new science fiction film from a director familiar with the genre, Mike Cahill, and I was intrigued. Perhaps this was an opportunity for these actors, especially Wilson, to step outside their comfort zones. And while that certainly might be the case, it fails to reach the heights that its ambitious premise seeks.

Bliss is the story of Greg Wittle (Wilson), an unhappy man who is estranged from his family and draws sketches of his dream house at work, rather than fulfilling his responsibilities. This leads to him being fired, and in a brief fit of anger, he accidentally kills his boss. He tries to take on a dizzying escape, which results in him meeting the mysterious Isabel (Hayek) in a bar. She reveals that she has powers akin to telekinesis, granted to her by colorful crystals she takes like a drug. She convinces Greg that she can help him be cleared of his crime and introduces him to her chaotic world.

Isabel explains that her powers are not just a result of the crystals but are representative of the fact that they are living in a simulation. She convinces Greg that most of the people they encounter on a daily basis are not real and that the crystals are the key to entering and exiting this world. If this already sounds complicated, keep in mind that it only gets more twisted and convoluted going forward. This is where the problems with the film begin and end.

In this film, it’s not enough to have a complex premise that seemingly pairs The Matrix with Limitless. Cahill feels the need to take it further and further, creating questions and turns up until the film ends. At one point, this does result in some intriguing ideas, and the film introduces visuals to set the tone for the story. The world that we are first introduced to is bleak, impoverished, and shot in cold, dark cinematography. When we enter a more ideal world, this is replaced by bright warm colors. It’s an interesting tactic that would have been a neat addition to a more grounded film.

After an hour plus of questioning, we are finally given some answers to the mystery that Isabel brings to Greg’s world. The solutions presented are conjoined with themes of environmentalism and wealth inequality that began to make me wonder if this film was going to dive deep into some of these areas in an innovative fashion. Unfortunately, the film abandons this to shift gears and become an action film to lead us into the dramatic ending. It’s an unnecessary change that comes at exactly the wrong time.

The shift in genre and pace is accented by a shift in ideology as well. Rather than take on the various themes that are already introduced, the film resorts to a classist concept in the vein of, “Why have it good when you can experience the mystery and unpredictability of a cruel life?” While we try to grapple with this theme, we are also subjected to constant plot exposition that sends the film in circles. Just when we can get our bearings on one development, another is thrown in the loop. This would not be an issue if the film reached a satisfying conclusion, or if the developments actually felt logical.

Despite all of the tonal and narrative stumbles, the question remains of whether the star power of Wilson and Hayek can save the film. Wilson applies his normal schtick here without the comedy to support it, and we’re hardly given time to get a true understanding of his character. Hayek is certainly the most admirable aspect of the film, as she does deliver the variances necessary for a character that is difficult to pin down. Still, it’s not enough to make most of the scenes in the film coherent or particularly interesting. There is a scene between the two in an ideal world, having an intellectual but calm conversation. The film could’ve used more of these light moments, rather than being so gloomy for the majority of the runtime.

The title of this film refers not just to a feeling, but the steps we take to find that feeling. It seeks to ask hard questions about where bliss comes from, but it employs empty characters to explore that. All in all, the film is really quite depressing, and it’s so easy to get lost in all of the explanations when we are given so few moments to breathe. The initial concept is fascinating, but the film turns away from the aspects that progress that fascination. Though a cameo from Bill Nye certainly brought a brief smile to my face, the film overall left me with the opposite of bliss.