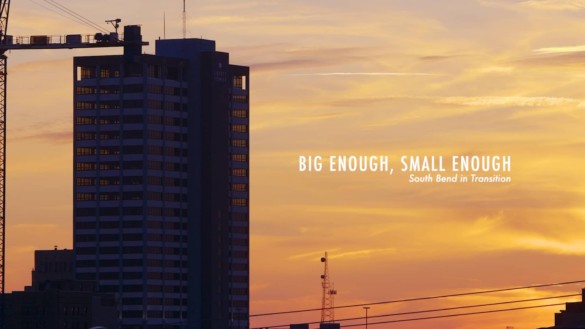 Synopsis: South Bend is in the midst of its most dramatic shift since the collapse of Studebaker in 1963. Today, it is at a turning point and still trying to find its footing. We held conversations with people around South Bend to capture how residents were experiencing its changes, embracing its new life, and confronting its enduring problems – thinking about it all as the mayor ran for president.

When I was growing up, my family and I would hop in the car, drive past cornfields and the corner gas station, turn onto State Road 23 and head into town. In ten minutes’ time, we’d be in downtown South Bend – the northern Indiana town that, until recently, was best known for the university that, technically, isn’t even in South Bend. Once we got as far as Sample Street, the mammoth warehouses would tower over us. I’d sit in the backseat and look at the broken windows and crumbling brick and wonder what happened there. What happened there was that a family-owned carriage business become the only company to successfully transition from horse-drawn vehicles to automobile manufacturing. That’d be Studebaker.

The name Studebaker hovers over Big Enough, Small Enough – South Bend in Transition. This is a new documentary from filmmakers Ryan Blaske and Zach Schrank, and – as the title suggests – it tells the story of the ways in which South Bend is changing. Spaced between beautiful images of the vistas that make up the city are interviews with South Bend natives and business owners. These are people who are part of the fabric of South Bend and are actively involved in the changes that are moving it forward. The documentary makes the case that South Bend is a city of “do-ers” and that any change that is now taking place is the product of the hard-working people that make up the city.

Speaking as someone who grew up in South Bend and has lived in the area his entire life, I can tell you this change has been building for some time. But this documentary comes at a time when it seems like all those changes are being realized in quick succession. Downtown is bustling now. When my family used to take those drives into town, it’d be a ghost town. Nothing happened downtown. The days of busy shopping centers in Studebaker’s heyday were long gone. But now? Restaurants, businesses, and a controversial streets project by the city’s former mayor (more on him later) have made South Bend’s downtown experience one that invites people rather than pushing them away. A major fulcrum in that change is another name that hovers over South Bend…

Another thing this documentary does really well is that it showcases the very interesting relationship that the city has with the world-renowned university that resides just a few miles north of downtown. Technically, Notre Dame has its own city – Notre Dame, Indiana. The documentary slyly points this out through one of its interviews. It underscores how many people in South Bend feel that, for all that Notre Dame brings to the city, the university is walled off from the city and doesn’t engage with South Bend as much as it should. However, that’s another thing that has changed, and the documentary shows just how.

It used to be that university graduates would look for the first ticket out of South Bend once they had their degree. The “brain drain” was something you would hear being discussed around town. Even as I went to college, I felt the push to look for opportunities in New York or Indianapolis or some other place. One of the advantages that South Bend has over other cities its size is that it is so close to cities like these. But that also presents opportunities for people to want to leave, and as I was growing up, many people did.

Big Enough, Small Enough mixes in its interviews with people who are South Bend lifers and people who have come to South Bend from other places. The interviews also have a mixture of genders, races, and backgrounds. In doing so, the documentary gives a full picture of life in the city in its 80-minute runtime. You don’t simply get the “inside view” but you also get the view of people who first saw South Bend as an outsider but have now become part of the city itself.

But now, we must get to the other name that hangs over this documentary and now hangs over South Bend. This name has probably now replaced Notre Dame (at least in the United States) as being the first name associated with the city.

However, you simply cannot tell the story of South Bend’s resurgence without also telling the story of Buttigieg’s impact. No city owes its success to one man, and South Bend is no different. But Buttigieg’s mayoral term was an incredible period of sustained growth for the city.

But it was also a time where long-held divisions continued to fester.

The most noticeable of these is the racial divide that has reared its head in South Bend. The documentary does take time to dig into this issue, and it notes how Buttigieg’s administration attempted to address the issue but also made key mistakes. However, again I will stress that the documentary shows no footage of Buttigieg and really only addresses him at a glance. That is a definite artistic choice, and I think it’s a good one.

This documentary could have easily morphed into a story about South Bend’s most famous son. But there are many things going on in South Bend that don’t involve Mayor Pete, and this documentary wants to showcase the city more than anything.

While I appreciate that choice, I do think the documentary failed to provide context in some key scenarios. I was able to come to this documentary with the context needed to process everything discussed within in it, but that’s because I’ve lived here. For people who don’t live in or around South Bend, they may lack the context needed to understand the impact of some of the topics that are brought up.

The most glaring example of this is when one of the interviewees references the “police tapes scandal” from the early portion of Pete Buttigieg’s time as mayor. The documentary never really gives any context for what that scandal involved and so we’re left with one view of the aftermath without really knowing what, in particular, is being discussed. Is it a main focus of the documentary? No, so I don’t think the creators should be expected to give us a deep dive into the topic. But if it’s going to come up in the interview content, I think the viewer should be provided with a little more context in order to process it correctly.

Visually, I cannot tell you how much joy I received from seeing the vistas and places with which I’ve become so familiar displayed on the screen in my living room. The film opens with a rising view over the St. Joseph River with the buildings of downtown South Bend in the background. This is a beautiful place. You may not think of beauty when you think of northern Indiana, but come here – you’ll see it. This documentary has the eye of those who find beauty in normal places.

The documentary mostly consists of the interviews. This is a picture in time of a city. It focuses on the changes that are happening, yes, but this is a momentary picture of where this city is today. It’s very present and current, and that picture is built by the voices and faces of the people who make up that city. The city imagery breaks up the interviews at times, but this is first and foremost a story told by the people of South Bend.

To support that present and current feeling that pervades the documentary, the camera is not stationary in these interviews. You’ll see it moving ever so slightly in some interviews, slightly changing focus in others, and even utilizing jump cuts at times. It makes the documentary feel fresh and constantly-changing, much like the city on which it focuses.

Overall, this is a very strong documentary that gives a beautiful picture of where South Bend is today and where it might go in the future. It made me proud to be a South Bend native, and it energized me to see the determination and ambition of the people that make up this city. One line of dialogue from the film’s opening moments beautifully encapsulates the power of this documentary. With voiceover, you hear these words spoken of South Bend:

“It’s big enough to have all the world’s problems, but it’s small enough that you know the people who are working on that – that make a difference. And you can feel like you’re making a difference.”

You can read the exclusive InSession Film interview with directors Ryan Blaske and Zach Schrank here. And you can watch the film on Vimeo and Amazon Prime.