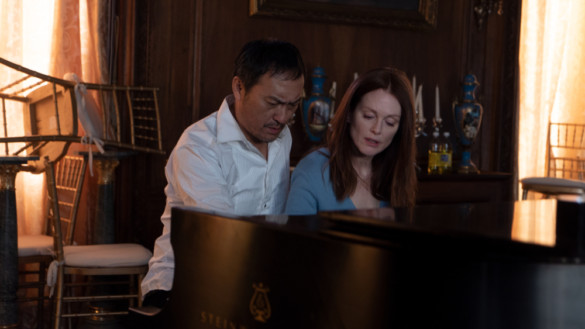 Synopsis: A world-renown opera singer becomes trapped in a hostage situation when she’s invited to perform for a wealthy industrialist in South America.

When I was in junior high, my sister handed me a copy of Ann Patchett’s Bel Canto and asked me to read it. She told me I would like it, and she was right. I’m a sucker for hostage story lines, but the story went to such emotional depths and, by the end of the novel, it became something so much more than a simple hostage story. It’s been a long time since I was in junior high, so I admittedly don’t remember much about the book, but I’ve often thought about it and how much I enjoyed it and I wondered why it was never adapted into a movie. And after finally seeing the big screen take, I kind of get why we didn’t get a movie sooner – Bel Canto is a sprawling, drawn out, emotional story about several people overcoming interpersonal barriers due to politics, language, culture, morality, and the law, and that’s a lot to take on in one two-hour long movie.

I should be clear from the beginning: I liked this movie well enough and I don’t think it was a bad adaptation. I just feel that it could have pushed a little harder to get the overarching themes and emotions of the novel across. There were so many characters and the story takes place over a decent chunk of time and it all had to be condensed into a two-hour movie. This is a rare example of a movie where I think it either should have been 20 to 30 minutes longer to give all the characters and storylines time to breathe and become believable, or it should have cut out a few characters and kept the story a little more contained. The dialogue also could have used some extra attention and I would have liked to see the various examples of language barriers played out a little better, but I think it did a pretty good job with what it had, overall.

It also should be said that the weaknesses throughout the script were largely compensated by the phenomenal performances throughout, especially by the always-amazing Julianne Moore. The character of Roxanne Coss easily could have come across as stiff and borish, but Moore exudes charisma and confidence in just the right combinations to make the character interesting and enjoyable to watch, even when her character is written in an unfortunately unlikable way. The cast throughout also does a wonderful job of getting the emotions of the story across when the script, likely due to the two-hour time constraint, simply can’t.

My overall impression of Bel Canto can be summed up like this: If you have to read the book for a class or a book club but simply don’t have the time, this is a decent adaptation and, combined with the Spark Notes, will like get you where you need to go. If, however, you’re looking for something with the emotional depth of the novel, you’re not going to find it here. It’s a fine movie with a great cast that looks beautiful but it just doesn’t push the themes, character arcs, or emotional storylines nearly as far as they need to go for this story.