Movie Review: ‘Beast’ is Exactly What You Think It Is 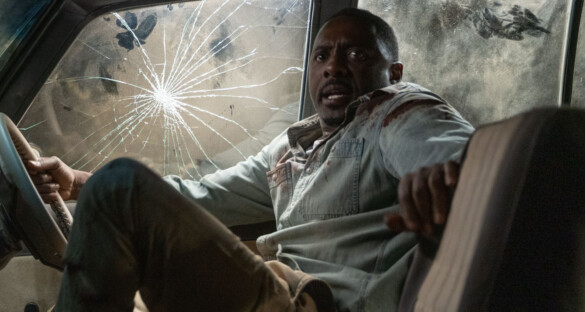 Synopsis: A father and his two teenage daughters find themselves hunted by a massive rogue lion intent on proving that the Savanna has but one apex predator.

Sometimes, you get exactly what you ask for. The person vs animal subgenre has a storied history, but does not always result in exactly fine filmmaking. Much has been made of the best of these, in Jaws, in which the limitations created a work of brilliance. But this genre, with the likes of Grizzly, Rogue, Razorback, and Anaconda, does not quite conjure dreams of Oscar glory. And sure, sometimes it is fun to get surprised by a film that is more than the sum of its parts. But the latest in this vein, Beast, is certainly not that.

Now that may sound like an insult, but there is an inherent joy in receiving exactly what you are expecting at the movie theater. Beast follows Dr. Nate Samuels (Idris Elba), whose wife has recently died. Nate is attempting to reconnect with his teenage daughters, Mer (Iyana Halley) and Norah (Leah Jeffries) after this loss. He takes them to South Africa, where their mother is originally from. Through a series of adventures, a rogue lion attacks the family, along with Nate’s friend, Martin (an incredibly subdued Sharlto Copley). All of this is to say that, yes, Idris Elba fights a lion. And that is exactly the movie you get, for better or worse.

Much of the extraneous detail that surrounds this battle, frankly, does not work. The script, penned by Ryan Engle, is mostly a mess. Halley and Jeffries are both talented young actors, but they are hampered consistently by dialogue that feels forced at best. However, the chemistry between Elba and his on screen daughters carries the audience past this and their relationship is mostly believable. But does the plot of a rogue lion make any more sense than it would appear? Also no, but honestly, once the action picks up, none of that matters. The direction of these sequences by Baltasar Kormákur is certainly not the best you will see, but the special effects work in high speed headed by Lise-Maria Bothma is truly worth the price of admission.

Earlier CGI work, which focuses on Martin being “hugged” by adult lions, feels iffy, particularly their work on the hair on the lion’s manes. But again, does that really matter when Idris Elba fights a lion?  Speaking of Elba, his physicality as an actor truly is what carries Beast. Because of his massive size, there are moments where you believe he can hold his own, at least long enough to save his daughters. Casting an average size man would immediately make an already fantastical moment even more unbelievable. Speaking of unbelievable, let’s return to that screenplay.

Your mileage may vary here, as this is certainly not a thinking person’s movie. You have to buy that this lion would want to take revenge on humans for killing his entire pride. This is the conceit, and if you can’t get on board, then Beast is just not for you. However, the last third of the movie will test even the biggest fans of silly survival movies. Without giving too much away, we have to accept that, despite being lost in the gigantic scope of South Africa, Dr. Nate and his kids will definitely find their way to where they need to be. Oh, and don’t worry, he also will quickly become an expert in tracking, creeping, and escaping every situation. Again, pretty expected, but be prepared for some giant sized leaps in logic to get to the final confrontation.

But you know what, after watching that confrontation? Worth it! Again, Elba is a fantastic physical actor, and the CGI mostly holds up in this elongated scene. It is especially impressive as it takes place in basically open land, without places to hide and cut away. Everything leading up to this is mostly filmed at night, and is much more forgiving of the special effects. This build lends itself to more positive feelings towards Beast as it allows us to look forward to what we know is coming. That is not to say they are not some mild surprises, emphasis on mild. The ins and outs of the character of Martin offer some fun, and it is a respite from the mostly unnecessary dream/memory visions of our protagonist’s wife. Many of these extensions reek of desperately trying to fill a blessedly short runtime, but they are truly unnecessary.

Not every movie is going to change your life. Some of them just have movie stars fighting a creature they could not possibly fight in real life. But, in many of these cases, the movie is just fun. Will we remember Beast for more than a day after we see it? Probably not. But did I have a blast in the theater? Most definitely. When you hear “Idris Elba fights a lion” you already know if you want to see it. If that phrasing interests you at all, then you are going to have a fun 90 minutes.