Movie Review: ‘Baywatch’ is a film that cannot save itself from drowning 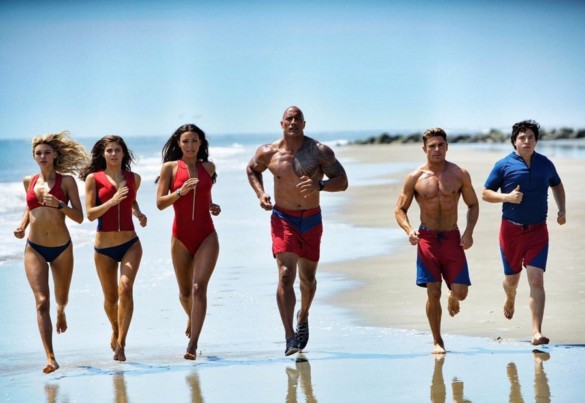 Synopsis: Devoted lifeguard Mitch Buchanan butts heads with a brash new recruit. Together, they uncover a local criminal plot that threatens the future of the Bay.

Dwayne Johnson was once described as “franchise Viagra.” Now that statement may seem a tad far fetched but it was and kinda still holds true. If The Rock is thrown into a movie that movie is almost guaranteed to crack a billion dollars. The G.I. Joe franchise, the Fast and Furious franchise, literally anything that The Rock is shoehorned into will grow into some sort of success for Hollywood and their pockets. Sadly his massive pectoral muscles and pearly white smile is not enough to save the absolute disaster that is Baywatch. Baywatch serves as a clear example for why people think that cinema is dying and the film does not deserve the monster box office numbers it will more than likely achieve.

When devoted, overly sensational lifeguard Mitch Buchanan (Dwayne Johnson) is forced to take a young, reckless pretty boy Matt Brody (Zac Efron) under his wing, the lifeguard crew of Baywatch discovers that there is crime afoot. Drugs, murder and scandal wash up on Mitch’s shore, he and his team must work together to bring down the force that threatens their beach. There is absolutely nothing redeemable about Baywatch, everything about this lackluster comedy is just cringe inducing.

First and foremost the comedy can hardly be described as comedy. Each joke whether it be some sort of insult or outlook on a situation, is a complete misfire. Attempting to achieve laughs through offensiveness and vulgarity, the film tries to play on the mindset of the millennial crowd. This film is clearly made for an incredibly niche audience and only a fraction of the population will find the jokes funny. Whether it be penis, butt or boob jokes, to “obliviously avoiding racist comments”, whatever angle the filmmakers try to approach the comedy is just a complete and utter disgrace.

Something that the audience can barely rip from the films heartless core is the character interaction. The dashing good looks of the cast helps with this and the entire cast practically pops on screen. However this element of seduction does not last longer than the films first ten minutes. The movie begins digging its own grave from the moment the film starts and right up until the film ends, it is constantly attempting to claw itself out of this six foot deep hole. The movie constantly tries to keep itself socially relevant by making a few jabs at social issues from time to time but just falls completely flat. When they attempt to be progressive they actually set themselves even further back. Baywatch is the cinematic equivalent of eating McDonalds, you know you don’t want to eat it but since it is always being thrown in your face you may as well just take a bite.

Baywatch tries to recreate the “buddy cop” element that works so well in comedies like 21 Jump Street or Men In Black. Sadly they completely forget to make us care about the characters in the slightest way. Baywatch throws so many characters in our face at once that it is way too difficult to have any sort of emotional connection with them. Each “emotional” scene is completely fabricated and as an audience member you could not care less about what happens to the lifeguards on Baywatch.

With a grudgingly long two hour runtime, the film barely pulls a snicker out of its audience. From ridiculous plot points, like Johnson’s characters not wearing sandals anymore, to Efron having to lift up another man’s private parts, the film is absolutely repulsive in so many different ways. With no character connection, completely fabricated emotional moments and just plain horrible jokes, Baywatch is easily already the biggest flop of 2017. From the first moments to the last, the film is constantly trying to save itself from drowning but sadly no lifeguards are around to perform CPR on the monstrosity that is Seth Gordon’s Baywatch.