Movie Review: ‘Battle of the Sexes’ underwhelms despite a stuffing of winning gears 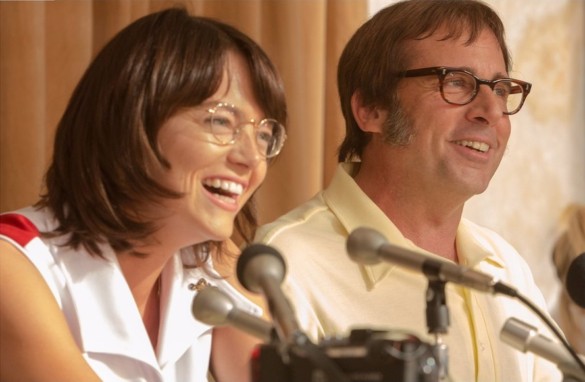 Synopsis: The true story of the 1973 tennis match between World number one Billie Jean King and ex-champ and serial hustler Bobby Riggs.

Billie Jean King came to be when the world blatantly and fervently conspired against her. And her tennis-playing sisters. Heck, her gender.

Even with the World No. 1 title, King was minimized by the guys of the sport as yet another housewife solely purposed to liven the kitchen, yet another set of teeth nibbling the bread won by her man. “Women play about 25 percent as good as men, so they should get about 25 percent of the money men get,” Bobby Riggs told King at one point. Unfavorable odds aside, she sliced her way through the virile squall, becoming more than just a woman tennis player of note. King, to this day, remains proof that women, those with athletic careers and otherwise, are to be perceived as so: can be equal, can be complementary, and – should the air turns competitive – can be victorious.

Yet lengthy sighs abound upon watching Battle of the Sexes, a film that, as if on default, only glances at King’s incredible achievements and struggles. It is so occupied with creating the “feel-good”-ness that it defangs the feel-bads, making the flood of endorphins at the end expected but not satisfying. On paper, the impact and relevance of King (Emma Stone) and her motivations are so primed to affect audiences, as King herself noted that the eponymous battle – in spite of its showiness, in-(arguably)-good-fun nature – can decide if a woman’s position, beliefs and advancements have any worth.

“Battle of the sexes” is more than just a term for exhibition tennis games between a man and woman in King and Riggs’ (Steve Carell) eyes. Whoever snatches the match point in this well-publicized, watched-by-90 million (and played in Houston, huzzah!) event will cement their gender’s footing for the next n-th years. Before this point, however, the film explores King’s many roles off the court: wife to caring husband Larry (Austin Stowell), demolisher of dismissals from the sport’s establishment – represented here by Jack Kramer (Bill Pullman), and the other half that completes admirer-slash-hairdresser Marilyn (Andrea Riseborough). Side note: While the real Marilyn was indeed King’s partner, she was a secretary (whose interactions deserve its own feature). So, is Schwarzkopf doing a subliminal advertising campaign here?

But, alas, Battle of the Sexes’ 121 minutes is all we have, and writer Simon Beaufoy has to divvy up time to focus on each role – the tennis-playing one included. The vignette-by-vignette unfolding gives little cause for anyone or anything to become memorable or affecting, even if it should be noted that everything is addressed with beautiful sensitivity and – welcomingly – zero bite into the circus surrounding the match. The formation of the WTA and the Virginia Slims tourney, rivalry with fellow tennis player Margaret Court (Jessica McNamee) and the bond with Marilyn are all intriguing King-centric events that would have been better addressed in separate pieces. In one setting, though? They all zip by, developments that miss their point in being significant and instead being props to accelerate the film toward the duel.

Nonetheless, disappointing slumps in crafting King’s story are wonderfully compensated with charged performances from everyone. Such is definitely the perk of having directors Jonathan Drayton and Valerie Faris in your crew, the duo who grouped three acting generations in a Type 2 van and got them radiating on equally powerful terms in 2006’s Little Miss Sunshine. Same with Beaufoy’s wise aversion to the sensational, Dayton and Faris’ direction highlights the talent rather than the easy-to-dramatize shenanigans. Riggs’ chauvinistic theatrics are attention-grabbing, sure, sure, but more prominent is Carell’s showcase of them, ultimately, being his character’s poison. From the sidelines, Riggs’ wife Priscilla (Elisabeth Shue) can do little except keep her hurting muted, part of the “package” of being a woman in this era – even if she is, deducible from appearance alone, the household’s source of finance.

Truly safe from the film’s fleetingness – in other words, capable to be appreciated in full – is Nicholas Britell’s score as it isn’t projected on screen. No-frills is again the winning style; there is only a hummable and rousing leitmotif that crisscrosses different background instruments. There is an expectation that many of the tracks will be featured in motivational videos, graduations, and sports commercials.

On a more serious note, however, as the notes stride, escalate and evoke a sense of triumph, one can almost see the perfect (or at least better) version of Battle of the Sexes: less of a harmless crowd-pleaser and more of a reflection of a real-life monumental milestone.