Movie Review: The Bat and The Kryptonian battle an overcrowded mess in Batman vs Superman 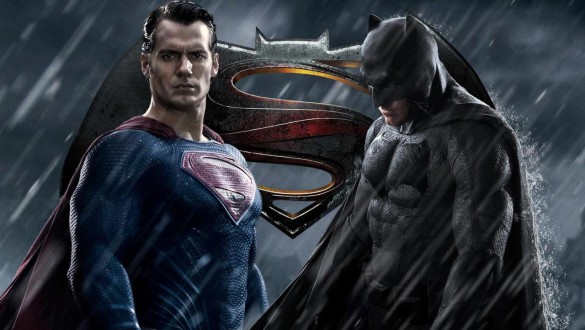 Synopsis: Fearing that the actions of Superman are left unchecked, Batman takes on the Man of Steel, while the world wrestles with what kind of a hero it really needs.

My first thought coming out of Batman v Superman: Dawn of Justice was, “Wow, I finally realize what the ‘V’ in the title means.”  It’s a Roman Numeral 5, because this thing is at least 5 movies. Either that or the “V” (meaning “vs” by this point) was put in the wrong place and shouldn’t separate the two superheroes of the title. Instead, it’s a narrative war of a “so-called” greatest-gladiator-match fighting against a shoehorned Justice League setup. In other words, this is a film that is constantly at war with itself, and only someone like Zack Snyder can take such an enormously plot-heavy film, and somehow turn it into such a slog.

The plot is pointless to describe, as it simply just feels like a random concoction of vignettes that do not come together well. Batman/Bruce Wayne (Ben Affleck) has a vendetta against Superman (Henry Cavill). Superman deals with the political repercussions of his actions in Man of Steel. Batman’s origins are explored, leading to discussions about an aging Bruce Wayne and his evolving moral code (sort of). A boyish and annoying Lex Luthor fascinates playing God and births Doomsday. Lois Lane gets stuck in the middle of EVERYTHING, thus becoming the most insultingly wasted female character of the decade thus far. The setup for the Justice League begins. And this all takes place in one friggin’ movie.

Cramming so many plot elements into one film isn’t the issue, as there are films out there that indeed do this successfully. The problem is Zack Snyder, who just doesn’t know how to tell or pace a story. This has been evident in all of his prior films already, and it is no different here.  Snyder is a visual director, and I will admit his visuals are indeed impressive and sometimes gorgeous to look at, but he is one of the few whose visual aesthetic comes first over narrative, thus sacrificing any potential characterization and drama a film like this sorely needs. The audience needs to still be able to relate to the characters, rather than just superficially tell us what they are feeling and expect that to be enough. It doesn’t help much either when heavy-handed Jesus symbolism is even utilized.

But the overcrowded script (where one of its writers is an Oscar winner) doesn’t do much to help either. The film was written by both Chris Terrio and David S. Goyer, and their jarring duality is very present. Terrio, hot off the heels of Affleck’s Argo, feels as though he is stuck writing a Batman solo film, leaving an amateur writer like Goyer to fill in the rest of the blanks. A solo Batman film would have been great, as those are the bits that work best in the film (perhaps the only bits that truly work), and seeing Affleck possibly take on the director’s chair for a Batman flick is truly exciting to think about.

On the subject of the casting, Ben Affleck is great as Batman/Bruce Wayne, and is the film’s only real saving grace. Although, little is done to establish this aging Bruce Wayne, who seems comfortable breaking his moral code here (if you don’t like to see Batman actually slaughter people, you may not like this interpretation). Gal Gadot is fine as Wonder Woman as well, but not enough time has been devoted to her yet, but the excitement in seeing her in her own movie is there. Henry Cavill is still rather bland as Clark Kent/Superman, and it becomes even more ironic when he is the one we care about the least, and Snyder had 2 movies to build him up. And Jesse Eisenberg is…I have no words for whatever that was.

This film will indeed separate the critics from the fans, and that is already apparent just by the Critics vs Audience scores on Rotten Tomatoes (a film about these gladiator matches would be more interesting).  I respect the opinions of the fans, and I’m glad this film is giving them joy and excitement, and that they are able to more easily fill in the narrative blanks so those issues become less important to them. This is a film that could have been good, if more focused and streamlined rather than shoehorned just to keep up with Marvel (seriously, that “set up” to the Justice League is incredibly eye-rolling). Regardless of how I felt about Batman v Superman: Dawn of Justice, I’m still excited for the DC Cinematic Universe and I want it to succeed, although I’m more excited for the future standalone films (Wonder Woman, The Flash, and Aquaman) than the eventual Justice League film(s). But if Man of Steel and Batman v Superman are a good representation of what we are about to get, then I feel like Doomsday may already be upon us. We shall see.