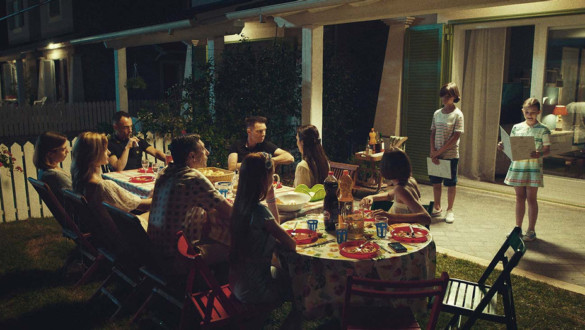 Synopsis: A few families living out on a limb in the suburbs of Rome. Tensions here can explode at any time; ultimately it’s the children who bring about the collapse.

On rare occasions, the credits of a film will roll and you feel a sense of relief that it’s over. Not because it wasn’t good, but because the brutality and bleakness become so daunting that you’re not sure how much more can be handled. That’s exactly the feeling when Bad Tales comes to its conclusion. A terrific piece of Italian cinema, it’s nevertheless a tough sit and one that will not appeal to everybody, despite being more than worth your time.

The story follows several families in a small town in Italy, mainly through the perspective of the young children and their dysfunctional upbringings. Siblings Alessia and Dennis have perhaps the toughest of situations, living with their abusive father Bruno (Elio Germano) who also makes wife Dalila’s (Barbara Chichiarelli) life a living hell. There’s also young Geremia, who is raised by single parent Amelio (Gabriel Montesi) who appears to only want the best for his son but is clearly not best suited for the job despite good intentions. There’s also the pregnant canteen worker Vilma (Ileana D’Ambra) who is preparing for life as a parent, while also acting very provocatively around young Dennis who she knows looks at her. Throughout the film, we see how these characters’ lives intertwine with each other and also how each family deals with the same situation.

Despite the narration of a character we don’t know, there’s no central figure to this story nor is there one particularly likable character. Everybody is flawed and many irredeemable, and it makes for an even tougher sit when there’s not one character to latch on to. Bruno is the closest the film has to an antagonist due to the disgusting violence he bestows upon his young crying children, but it’s clear that teacher Professor Bernardini is not to be trusted, especially when we learn just what he’s been discussing in class the influences the children in a traumatic way. The way the adults talk and behave – especially the older male characters – is vile at times, which makes it all the harder to sit through.

The central idea of the film is that without true role models – whether it be parents or teachers – these children are forced to grow up too quickly without any true understanding. They learn about things and discover things they are simply too young to get their heads around, but there’s not anybody around to talk to besides each other. The tragic feel of the film only grows stronger as the runtime progresses, but it’s compelling filmmaking.

The performances from the entire cast are excellent, especially the young actors who have sensitive material such as domestic abuse scenes to handle. Tommaso Di Cola as Dennis feels the closest we have to a central protagonist, while Justin Korovkin creates a fascinating character in Geremia. Elio Germano is by far the highest-profile actor, having won numerous awards in Italy and internationally for various work. It can’t be easy playing a character so detestable, but he makes it work without ever feeling like a caricature. Gabriel Montesi and Ileana D’Ambra are also particular standouts from the cast, both creating memorable characters whose arcs ending in jarringly different ways.

The D’Innocenzo brothers – Damian and Fabio – wrote the script as well as directed, and it’s clear that they understand the story they want to tell. The brothers won the Silver Bear at this year’s Berlin Film Festival for this script, and it’s deserved. It takes courage to create such a pessimistic unflinching look at the rougher side of childhoods, but they handle it with care and maturity. They also deserve inordinate amounts of praise for the performances they are able to bring out of their young actors. Their previously directed film Boys Cry was also an incredibly tough sit, something that’s quickly becoming their specialty. The stylistic decisions are also commendable, with many shots framed beautifully despite the ongoing horrors. The talent of the two brothers is on show for everybody to see.

Sometimes the brutality becomes a little too much – especially in the scenes involving Bruno – and there’s a sense of relief when the film’s credits roll. The tension escalates throughout like a ticking bomb, and the film’s conclusion is disturbing and unexpected. The brothers manage to wrap up all of the major arcs in a way nobody can see coming, but it’s commendable for how far they are willing to go. There are particular moments throughout the film that make no sense at the time, but the ending soon fits the puzzle pieces together to create a disturbing finished picture.

There are also particular characters that feel as though they are lost throughout, particularly female characters Dalila and young Ada (Laura Borgioli) the closest friend of Dennis. These characters, in particular, feel like there are complexity and nuance to them just bursting to be explored, but there’s just not enough time and they feel lost to the wayside.

While this review has mentioned the words disturbing and brutal many times, it’s not meant as a negative, because it’s exactly what the D’Innocenzo brothers are going for. It’s obvious from the title Bad Tales that this is no happy story, but for all its bleakness, it’s admirable and stylish to look at. Not one to revisit any time soon, but one that’s a must-watch to truly appreciate its intent.