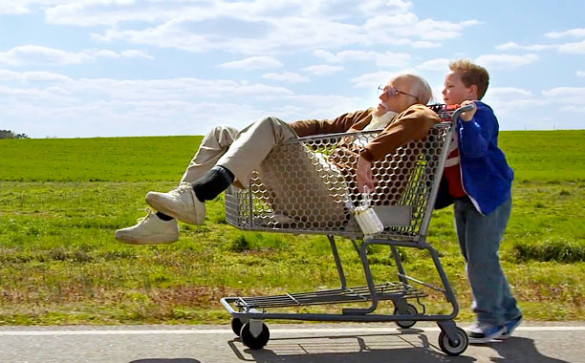 Just as the old saying goes, when something ain’t broke, there’s no need to fix it. Jeff Tremaine has worked with Knoxville and his band of jackasses on all of the Jackass theatrical releases over the years. In the newest release, he continues to up the ante a bit on the production end of things, as well as his choices in the cutting room. Due to Johnny Knoxville’s experience with minimal budgets and resources, lack of footage has never been a problem for these projects. Throw in veteran craftsmanship, time to come up with new and hilarious ideas, and a somewhat different avenue of the Jackass brand (the fictional Bad Grandpa) and what you’ll find on the screen is a wildly successful demonstration of how to make audiences laugh. Tremaine stays out of Knoxville’s way while still exercising his position to maintain a most satisfying duration and mix of comedy.
Grade: A

Johnny Knoxville is the mastermind behind Jackass, and more than likely this is the brand he will be remembered for. It’s no surprise that he wrote the screenplay or that he gives his director some story credit as well, but what is interesting to me is the inclusion of three others as it pertains to the story. First are Fax Bahr and Adam Small, an experienced comedy writing duo whose writing credits include In Living Color and MADtv, as well as the screenplay for In The Army Now. On top of those two is Spike Jonze, a star director in Hollywood whose credits include Being John Malkovich, Adaptation, and the upcoming Joaquin Phoenix led OS-romance entitled Her. I’ll talk more about Jonze in the performances section, though. What makes this a great film is the evolution of Jackass as a property, and this is a good example of an experience group of people who keep building to make a franchise better and better. It’s too bad so many other properties don’t receive the same love and affection.

Johnny Knoxville is barely recognizable as Irving Zisman, and while we know it is him under the prosthetic, it is never obvious. This character feels like a part of Knoxville, a unique character which all great comedians have in them. The prosthetic is amazing, and we get to see a sneak-peek at the transformation in the credit scenes. Rarely are makeup artists mentioned, but Steve Prouty deserves recognition for the job he has done here. It’s no surprise though, since he is hard at work. Most recently, you might have seen his work in Thor, Star Trek: Into Darkness, Zombieland, and Men in Black III. Interestingly enough, Catherine Keener and Spike Jonze had larger roles in the film that were trimmed out to focus more on the main story arc, but Jonze has said that we’re certain to see the material at some point. With all of that said, the performance that seemed to consistently win over the audience was Jackson Nicoll’s Billy. Being the grandson of Irving has its comedic benefits of course, but the kid is not just a sidekick. He has a lot to do and when he is given the lead, he is entirely genuine and quite a pleasure to watch. I hope we see him again soon.

Ben Hochstein provides the usual Jackass tunes but throws in some nice complementary material as well. While the score never shines bright, one cannot dismiss the major brand identity that Jackass derives from its simple guitar riffs and sounds.

If you like Jackass, you’ll love Bad Grandpa. With a great grandfather-grandson dynamic between Johnny Knoxville’s Irving and Jackson Nicoll’s Billy, a fantastic director who compiles a perfect amount and variety of footage, and hilarious sketch ideas from a host of talented writers, this grandpa turns out to be actually quite good. Seek it out in theaters and have a good time with audiences this weekend.