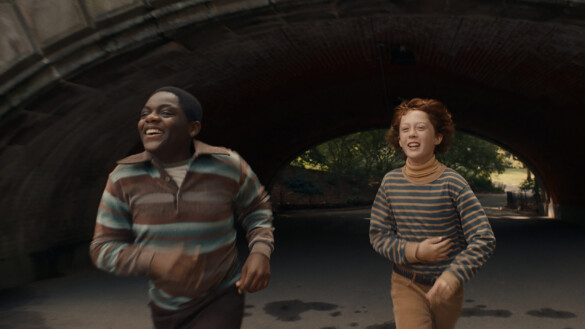 Synopsis: A deeply personal coming-of-age story about the strength of family and the generational pursuit of the American Dream.

James Gray’s 2019 sci-fi epic, Ad Astra, was one of the best films to release that year. The familial tale of legacy and self-discovery, set within the backdrop of expansive space, was masterful. With his follow-up, Armageddon Time, Gray looks back to his childhood, which just so happens to have taken place in the most wonderful place on Earth: Queens, New York. Of the five boroughs, there is no denying the unique nature of Queens. As the largest borough in New York City, it’s commonly referred to as The World’s Borough. Having grown up in Flushing, to see Gray return to his roots is simply a delight. And for him to dive so personally into his upbringing is something that should be cherished. This heartbreaking tale is full of raw emotion that could clearly be captured only by way of vivid memory and looking back. Through Paul Graff, played by Banks Repeta, Gray is able to look back at his childhood earnestly, through the lens of all that he has currently experienced thus far. What is equally important however, is that Gray also depicts what these moments in time feel like for any sixth grader who has yet to experience life as a teenager. It’s a profoundly moving film that blends the past and the future while rooting itself in the present, and living within each confusing moment.

As the Graff family sits around the dinner table early on in the film, the camera bounces around to every member of the family. As Irving Graff, played by a fantastic Jeremy Strong, goes on and on about his favorite type of bridge, it becomes apparent that Gray is mining his own childhood memories. The dialogue that is found in the screenplay of Armageddon Time feels far too distinct and honest to be anything other than pure family history and personal minutiae. And familial history is something this film handles particularly well, perhaps more than any of the other themes present within it. Take for example, a soft moment in which Grandpa Aaron sits with Paul before the child goes to bed. In a performance that is both deeply playful, yet wholly moving, Sir Anthony Hopkins is wonderful in this film. He tells Paul, in quite vivid detail, the story of his own mother escaping from Ukraine after witnessing her family being murdered for being Jewish. Based on the true experience of Gray’s great-grandmother, Hopkins recounts these experiences to Paul with such haunting memories, not to frighten the child, but simply because there’s no other way to deliver a story such as that. As he tells of her courageous journey all throughout Europe, ending up in Liverpool, all that Paul seems to have latched onto is that Liverpool just so happens to also be where The Beatles are from. Too young to fully understand the impact of his grandfather’s story, Paul just asks to see him again soon so they can shoot off the model rocket his grandfather gave to him as a gift. Yet, as Paul goes to bed, the words of his grandfather seem to haunt him. After experiencing real loss, Gray is priming his cinematic younger self for certain realities in life, even if Paul is not yet prepared for it.

Through moments in time, the family unit we remember as children will inevitably shrink. It’s unfortunate, and deeply saddening to think of at any age, but to Paul, these moments cannot be fathomed. To think of any seat being empty at the table would be akin to armageddon. This thought of the world ending is a through-line of the film, with certain moments being handled better or more realistically than others. As Paul grapples with the events transpiring in his life at home and at school, he comes face-to-face with just how much good, and bad, the world has to offer. Discovering his true passion for art, he looks to his elders for inspiration. Serving as a pillar of inspiration for Armageddon Time, Gray’s relationship with his maternal grandfather makes up the foundations of the relationship between Paul and his grandfather. As the two sit in Flushing Meadow Park, the autumnal hues in the trees signify the change coming in the seasons. It’s a perfect backdrop for the following conversation between the two; the visual language of this period piece breathes an aura of imminent change across everything. As Grandpa Aaron speaks to him, he passionately lets Paul know to “not be nervous. Be bold.” With all the change occurring in his life, Paul seems to turn inward, regardless of how his grades or his parents are affected by this choice. With dreams of becoming an artist, the encouragement of his grandfather to be bold is clearly something that resonates with him, even if he doesn’t necessarily know how to effectively channel it yet.

When Paul learns about the consequences of his actions after a particularly rash decision, Armageddon Time positions itself as a coming-of-age story that, above anything, is honest to Gray’s family history. Gray “committed to creating characters who were true to their real-life counterparts, warts and all, including himself.” It’s a film that forces the viewer into the mindset of Paul, where he hears all sorts of advice and ways of thinking from a variety of people in his life. As an adult, knowing what to tune out and who to really listen to becomes more clear. But as a child, all these voices could stack one on top of another in a very overwhelming way. In Armageddon Time, Gray confronts this directly by displaying all the advice he remembers, both the good and the bad. From the Trump family giving speeches at his school on the topic of privilege in the workforce, to his father opening up on how unfair life can be when confronted with the facts of racial injustice, it is the encouraging and just words of Grandpa Aaron that become most essential to Paul, and subsequently, the audience. It is commendable the level of honesty Gray portrays within this film, even if some of the parental messages sent can become a bit muddled. Rather than serve up a Hollywood coming-of-age with standard dramatic beats, Armageddon Time is a much more fascinating work to grapple with. When looking back at a life lived, we may be confronted with some ugly truths that, at the time, were unknown to us. While this does make for a film that can lose its way from time to time, it is a welcome change to see such earnest candor brought to life on the big screen.