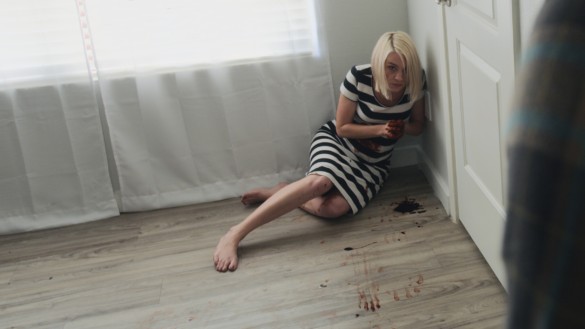 Synopsis: Marco is running out of time to find a job before his girlfriend has their first baby. He’s also losing his mind.

Several moments of this film feel all too familiar for this pandemic age. Apartment 413 is the story of a man who’s homebound—perhaps voluntarily, perhaps not—as he struggles with his mental health and fears of inadequacy. Marco (Nicholas Saenz) is at the end of his rope. He’s between jobs, behind on his bills, and his girlfriend Dana (Brea Grant) is due to give birth to their first child any day now. As he’s futilely applying for jobs in isolation every day, Marco’s humiliation is mounting and manifesting as a dangerous form of depression, then from there into something more sinister. Too often, people on the outside perceive the immobility that comes with depression as laziness, without any understanding of the turmoil that eats at you from the inside. The inward nature of mental illness can be tricky to capture on-screen in a non-stylized film, so this crew employs a dash of genre to physicalize the psychological.

Apartment 413 is set in almost entirely in one central location, over the course of a handful of days, with just a few characters. This is admittedly not an easy feat from a screenwriting standpoint. In such a confined script, each verb has to actively propel the plot forward while highlighting the drives and struggles of the characters. And with so few names per scene, specificity becomes especially important. Screenwriter Ron Maede manages to construct a sturdy foundation from the page, though the narrative does have a tendency to stagnate from time to time. Apartment 413 is already on the lighter side in terms of its length, but the tempo is not as breezy as the minute count would suggest. Ultimately, I’m not convinced there’s enough external conflict to warrant a feature film status.

Thankfully, director and co-editor Matt Patterson is inventive enough to keep things visually interesting. Patterson embraces the parameters of the story he’s working with—not to mention his modest budget—and imbues some sage filmmaking techniques to raise the energy when it’s needed. But he doesn’t do it alone. Sometimes the smartest thing a director can do is assemble a strong squad. The film’s other credited co-editor is A.J. Edwards, who contributed to Terrence Malick’s Knight of Cups. Keeping a film’s pace at the proper speed can be a difficult task for an editor to nail well in a film not bound by time and place, and Edwards splices Patterson’s shots together with an unassuming proficiency. Rounding out the creative team is production designer Ashley Landavazo, whose art department prowess helped bring last year’s The Dark and the Wicked to life. The apex of her work on this film is an impressive earthquake sequence that successfully thrusts the film into its emotional peak.

The main reason to watch Apartment 413 is Nicholas Saenz. The whole, merciful 80-minute runtime is really a showcase for his talents. As Marco spirals further into psychosis, Saenz plays his character’s condition earnestly, without any the theatrics or affectations that would compel some reviewers to use the word “unhinged.” Absent, too, is any sign of the purposeful inelegance that many liken to “rawness.” He instead trusts that the camera will see the internality of his work. Through the measured and cadenced progression of Marco’s arc, Saenz demonstrates a selfless willingness to let his portrayal be in service of the film, which sounds like it ought to be a no-brainer, and yet actors playing delirious roles habitually seem to think it’s supposed to be the other way around.

The rest of the small ensemble is good as well, but their material isn’t quite as exciting. As Marco’s pregnant girlfriend, Brea Grant delivers a firm and confident performance. She takes a role that could have easily blended in with the background but instead brings a sympathetic dimensionality to her character. Dave Buckman portrays an ominous mechanic roaming the property who becomes a vexing figure for Marco. I suspect the character was meant to have a vibe reminiscent of Robert Blake’s Mystery Man in David Lynch’s Lost Highway, but Buckman’s performance is a bit too forceful and prickly. And in the end, his exact significance in Marco’s life is a smidge unclear, which seems to be a running theme with this narrative. Ambiguity works when a filmmaker offers enough evidence to allow the audience to formulate a cogent theory. But Apartment 413, unfortunately, leaves too many stones unturned.