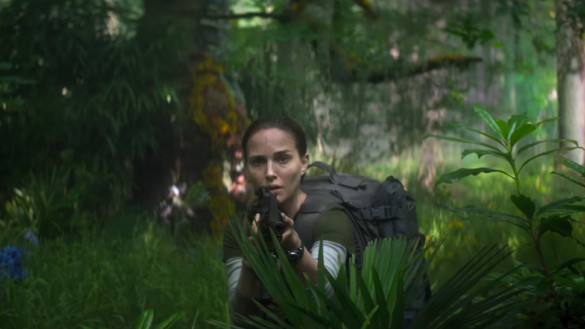 Synopsis: A biologist signs up for a dangerous, secret expedition where the laws of nature don’t apply.

A hit in both critical and fan circles, Alex Garland’s directorial debut, Ex Machina, presented a culmination-of- sorts for much of the teeth-cutting evidenced by Garland’s writing credits for Danny Boyle’s 28 Days Later and Sunshine. His latest work, adapted from the Jeff VanderMeer novel of the same name, brings its writer/director’s penchant for modestly-budgeted- yet-gorgeous, ideas-led science-fiction with horror elements – a niche housing few voices – to its next logical step. While Ex Machina’s cast have since turned their attentions to vastly more commercial fare (though Oscar Isaac makes an appearance here), it seems only a matter of short time before Garland himself is entrusted with a production of Nolan-esque scale. One does drool at the prospect.

An interrogation opens Annihilation, introducing us, as it unfolds, to Lena (an excellent Natalie Portman), her vague responses to Lomax’s (a sparingly-utilised Benedict Wong) questions offering a clue as to the ambiguous unfolding of her story. The picture is then ours to complete, retracing Lena’s steps from the university in which she lectures biology, to a short-lived military career and the mysterious vanishing of husband, Kane (Oscar Isaac). Kane, of course, does return, but his non- explanation does little to placate Lena’s understandable scrutiny, a befuddlement in his gaze mirroring her own from the opening scene. This confusion, it turns out, can be blamed squarely on The Shimmer, an unexplained membrane of greenish/purple-hued light encircling a wide, forested park, at the centre of which stands a lighthouse, assumed to be the epicentre of the phenomenon. Kane’s condition, now quarantined and in a life-threatening mess of things, prompts Lena to volunteer her expertise to an investigative four-member team of sciency girl power (a point not lost on Lena as she remarks, “All women?”) led by Dr. Ventress (Jennifer Jason Leigh), as they attempt to search for answers to questions they don’t even know to ask.

Visually, Annihilation is an unerring triumph. Though made on a comparatively paltry budget to most A-list casted sci-fi, clever use of lighting adds weight to the most horrifying moments while the most pastoral are bathed in vibrant, hyper-real tones. The Shimmer quite literally shimmers in the ubiquitous lens flare that, in other films, I’ve taken to be a distraction; here it enhances. (Of course, all this adds up to a point about urging readers not to wait for the Blu-Ray release; this is a proper big screen event.) And it’s because all this technical balance works so well that the questions at the heart of Annihilation merit their attention: Why is Kane sick? Why can’t they remember simple things?

…What will they find at the lighthouse?

Like Ex Machina before it, but perhaps more like his Sunshine screenplay, Annihilation is first and foremost an ideas film. This I write as a disclaimer for those unfamiliar with the marketing practices of glossy sci-fi features: the trailer, aside from showcasing some of Annihilation’s awesome spectacle, doesn’t prepare you for the rabbit hole down which it delves. Deeply. That this film features a third act to my mind reminiscent of Ken Russell’s Altered States and Jonathan Glazer’s Under the Skin is, frankly, applause-worthy, and speaks ultimately to an ambition far wider than we’re used to seeing in our multiplexes. My own reservations about an entirely needless final shot aside, I couldn’t be more anxious for Mr. Garland’s follow-up, hopefully un-Netflixed project.