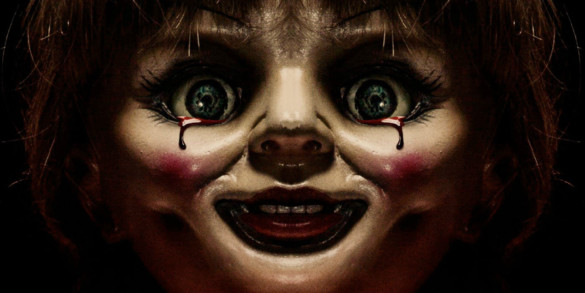 Synopsis: Several years after the tragic death of their little girl, a dollmaker and his wife welcome a nun and several girls from a shuttered orphanage into their home, soon becoming the target of the dollmaker’s possessed creation, Annabelle.

Let’s not hover around the haunt: Annabelle’s first solo appearance is detritus. Of its 99 minutes, 6 are somewhat watchable, but bear in mind that they don’t arrive in consecutive order. Rather than making the shadows worrisome and unclenched an exquisite feeling, Annabelle motivates the body to do activities it tends to delay – make the next meal, check off those unread emails, finish assignments and so on – to reclaim your time.

Startlingly, nothing of the sort happens with Creation.

The film focuses on a group of orphan girls being relocated to a settlement distant from civilization, a move that recalls the opening of The Devil’s Backbone and Pan’s Labyrinth. This new place, a capacious abode of toymaker Samuel Mullins (Anthony LaPaglia) and his wife Esther (Miranda Otto), doesn’t take long to make a positive impression, particularly to Sister Charlotte (Stephanie Sigman) who oversees the girls and to polio-stricken Janice (Talitha Bateman) who is pleased with the stair lift that can safely move her between floors. With these many doors and crannies, Janice and BFF Linda (Lulu Wilson) promptly let the curious bug take over, entering the not-to-be-entered adjacent room once inhabited by the Mullins’ daughter, Annabelle aka “Bee” (Samara Lee – what a name!), who 12 years ago died in a car accident. Moving on seems optional for Bee when she is permitted to move into the titular creepy, porcelain and vacant-eyed doll. So was that even Bee?

Right from the impressively staged shocker of a prologue, Creation welds merit to two things: that the film will finally serve horror and thoughtfulness will be behind every frame. Director David F. Sandberg’s job here is easy – clear the ankle-high bar that Annabelle has set – yet we should be glad that he is on set with the over-achiever mentality. Similar to the Ouija series with Origin of Evil, the preceding installment’s shameless cash-in nature is replaced with a director who comprehends the genre. As doctors everywhere would claim, a break before giving the plaything another go can improve the quality of the experience, having found the time to reflect on mistakes and successes (mostly the former in Annabelle‘s case). Alternatively, just add Wilson to the cast as director Mike Flanagan has done, the 11-year-old starlet whose possessed – pun extremely intended – performance in Origin of Evil was an absolute highlight.

The knack to convincingly portray terror breaches cinematic universes in a different actress, too, as Bateman is the real-life sister of Lights Out’s child actor. While Janice’s physical drawback (Janice has a crutch) can be interpreted as a genre gimmick, Bateman’s sensitivity convincingly reframes it into another layer of frailty for her character, who at one point is dropped from considerable height after failing to escape the demon. Even when Janice no longer has a choice to hobble away from the fear (and becomes the source of it instead), Bateman still bewitches when she monstrously lashes out at the rest of the household.

Save for replications of The Conjuring’s possession scene and Lights Out’s violent pull into darkness, Sandberg packs Creation with jolts that petrify mainly – and, at this point in the genre, nearing novelty – through construction. This is Sandberg’s greatest strength, and those who have dared watch his ponysmasher shorts can agree, one that never fails to brew the sincerest form of dread. He understands that the violin’s unholy plucks won’t twist eardrums as much as the increasingly rapid footsteps barreling toward the character. Why settle upon the screeching entity when heightening the panic-o-meter better is a mute, walking white sheet? And when need be, switch things up – have light bulbs loosen themselves, or reveal evil being there with just a glowing pair of eyes in the darkness. To guarantee the tastiness of Creation’s bag of freaky tricks, on board with Sandberg are key players who have contributed plenty to today’s horror landscape, including Insidious’ series production designer Jennifer Spence and director Alexander Aja’s regular d.o.p. Maxime Alexandre.

Such flourishes can be seen as Sandberg filling in for the lackluster-at-worst and detached-at-best efforts from writer Gary Dauberman, a holdover from Annabelle. There is no going around the characters’ thinness and the scare-to-scare plotting as a result, but luckily passion fuels the performers’ delivery and recognition of the ingredients behind a veritable scare – simplicity and obscurity – are there in the director. Had these two are absent (again), Creation would have really dented the soundness of this “The Conjuring Universe”: profitable, but on unworthy substance.

Yet, in the same breath that Creation is not a time-waster, its major returns this time will be justified. In theory, Sandberg and company needn’t care for anything else besides their own film, but their efforts have made Annabelle an essential watch. At least up until John R. Leonetti’s footage meets the pre-sequel.