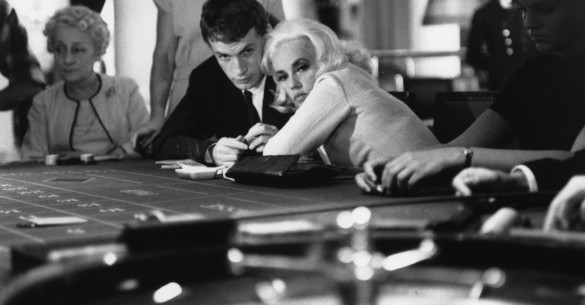 Seeing a movie like Casino (1995), 21 (2008), or Uncut Gems (2019) does bring the attraction of what people will do when it comes to placing a bet on a card, a ball, or the spin of a wheel. Even if we don’t gamble, it becomes fascinating when you read into the lives of professional gamblers and those who know the backstories to how it was once run (Vegas was first ruled by mobsters) and how they are played today. Thanks to the cinema, these stories put to light some of the intrigue, backstabbing, passion, and risk that is enwrapped in the gambling lifestyle.

Rita Hayworth made her mark permanent in the titular role, the center of a love triangle including her husband, the wealthy casino operator Ballin (George Macready), and the small-time gambler Johnny (Glenn Ford), who is hired by Ballin to overlook his illegal casino operation. Hidden in Argentina and away from the war, conflict comes with Ballin’s dealings and the obvious love between Johnny and Gilda, who makes her first appearance by coming up from below the frame and throwing her hair back. It’s a film noir with sex appeal and Hayworth’s rendition of “Put The Blame On Mame,” while wearing a strapless black dress is an iconic moment in film noir.

Jean-Pierre Melville’s gangster film follows an ex-con who has spent his past twenty years of freedom being a professional gambler, but by this time, he is broke. Breaking his streak of being straight, Bob and his friend, a croupier in a casino, plan a heist to raid the casino’s safe of its millions of francs. Even with the team hired and the plans set, things begin to crumble within the party, but Bob suddenly finds himself suddenly on a lucky streak. Melville would start his niche of gangster flicks in his career and focusing more on the thievery, but Flambeur is one of his more merciful films towards his protagonist with its ironic twist of luck. Co-star Daniel Couchy is here in this documentary talking about the film; put on the CC and you can see it in English.

In his second film before turning to color with his romantic approach, Jacques Demy covers the opposite direction from Flambeur’s starting point. A young man wins big at roulette, travels to Nice, and meets a woman who is an addict to gambling, even preferring it over love. It is a thrill, win or lose, but it empties the woman’s soul and tests the man’s attraction to helping her. They are the sole subjects of the movie and it is their emotions that drive the story rather than the results at the table, which is reflective of how a lifestyle can suddenly become a toxic mental state. So, here’s a PSA to say if you or someone you know as a gambling problem, there is help for that.

What a great film for Paul Thomas Anderson to make his debut with. With the reliable Phillip Baker Hall as Sydney, John C. Reilly as his protege, Gwenyth Paltrow as a cocktail waitress attracted to the protege and Samuel L. Jackson as a sketchy security specialist at a casino who finds out he has a connection to Sydney. It’s a short PTA film, only Punch Drunk Love is shorter, but it captures the same feeling, the same jazzy mood Anderson always puts into his work. The film’s title comes from a great scene in where Sydent places a big bet during a game of craps against a cocky gambler, played by Phillip Seymour Hoffman, and wins by rolling a double four.

Two films the same year sent us in the casino in different time periods bringing in sudden romance and the pitfalls of owning your life to enforcers of the casino and the law. First, there is the true story of Owning Mahowny, a fictional version about a bank employee from Toronto in the early 1980s who embezzles millions of dollars to fuel his gambling habit in Atlantic City. Phillip Seymour Hoffman is the trustworthy assistant bank manager who hides his problem, even from his girlfriend, played by Minnie Driver.

In The Cooler, William H. Macy plays a casino employee whose personal string of bad luck makes him perfect to stand at tables to cause bad luck for the players. In his case, the man has no sex life and is indebted to a ruthless casino boss (Alec Baldwin in an Oscar-nominated performance) because his own gambling debts were paid off by the boss. But luck seems to change when he falls for a waitress, played by Maria Bello. Both great indies from a simpler time around the same hostile environment.