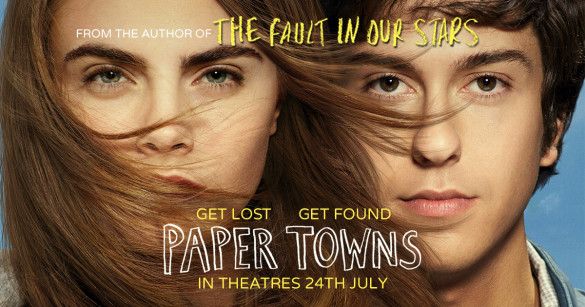 I am a firm believer that people come into your life for a reason and whether it’s a lesson, blessing or a damn headache. Quentin ( Nat Wolff) is a safeguarded High School senior who always does things by the book. Quentin plans to attend Duke with hopes of becoming a doctor. Quentin has lived next store to Margo Roth Spiegelman (Cara Delevingne) since he was 9. The first time he laid eyes on her; she became his shining light on a darkened day, too bad she never knew it.

Quentin’s century was made one night when Margo recruits him to help her play mischievous pranks on the friends who betrayed her. Margo introduces Quentin to several things that day, but the most important is Paper Towns. Margo vanishes over the next few days, and Quentin enlists the help of his friends Ben (Austin Abrams) and Radar (Justice Smith) to help him piece the together the clues Margo left him.

Paper Towns is based on the novel by John Green ( The Fault in our Stars), not as emotionally invested as his former film but this is still an excellent film. Paper Towns delivers a heartfelt story about love and friendship, backed by excellent performances by Wolff and Delevinge.

As good as this film is there are several huge problems with it, and it all has to do with the high-schoolers having free rein to do whatever the hell they want. Margo can just disappear like a welfare check, The kids can just leave school and travel by themselves over 1,200 miles away in the middle of the night. I know Florida has the weirdest things happen, so in the scope of the film this makes sense.

Paper Towns is on my Top 10 list of best films of 2015 so far, and if you are a fan of The Fault in Our Stars you will love this one Paper Towns has terrific young leads.