Featured: Me And Earl And the Dying Girl is a must see! 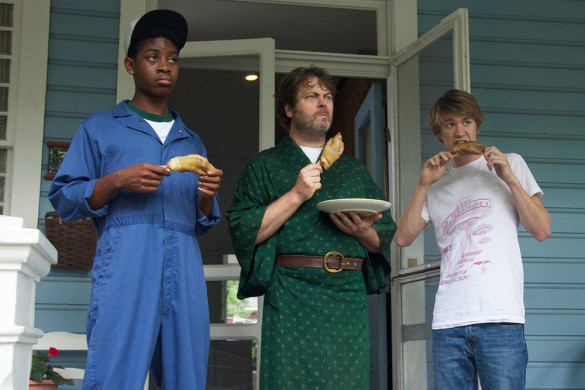 First off Olivia Cooke, I am glad that you finally got the recognition you deserve as an actress because you did a Curry type performance in Me and Earl and the Dying Girl playing Rachel. Me and Earl and the Dying Girl tackles the subject in a humorous way while still being able to reach that emotional cord. It’s a different style of movie than last year’s Fault in Our Stars, but it is similar in having a standout young cast and tackling a very serious issue. Me and Earl and The Dying Girl has a catchy title, and it makes up even more catchy titles in the low-budget films it’s two stars make.

Have you been forced to do something you didn’t want to do by you mother? I know I did, and for Greg Gaines (Thomas Mann) he was asked to befriend cancer patient Rachel. Greg and Rachel forced friendship starts as good as a Plenty of Fish conversation. The more time Greg spends with Rachel, the more they develop an impeccable bond. Greg eventually introduces Rachel to his coworker and friend Earl (Ronald Cyler II). Earl and Greg’s films are a sacred bond between them, and when Carl begins showing Rachel the videos, Greg finds his simple life being more complex in a good way.

From the start, you get a feel for how the story goes as the movie is broken up into parts, and the comedic bits come as fast as Lebron James’ next Cleveland departure. Senseibile, humorous, quirky, delightful, Me and Earl and the Dying Girl is in the same class as The Spectacular Now and The Perks of Being a Wallflower.

Thomas Mann, Olivia Cooke, and Ronald Cyler II are all fantastic and they needed to be for this type of film to work. Mann’s deadpan style comedy is balanced by Cooke and Cyler’s characters. The supporting cast which includes Connie Britton, Nick Offerman and a very small part for Hugh Jackman.

What surprised me about this film is the script because it makes jokes about cancer pretty much throughout the whole movie. Weird, as it sounds the joking, is not offensive, and credit screenwriter Jesse Andrews (also wrote the novel) for putting a unique spin on building friendships. Andrews’ characters build their friendships through movies.

Me and Earl and the Dying Girl if you cannot tell, I highly recommend this film, and it is my new number #1 film of 2015. If you are tired of superheroes, dinosaurs, naked men, talking bears then this is the movie for you.