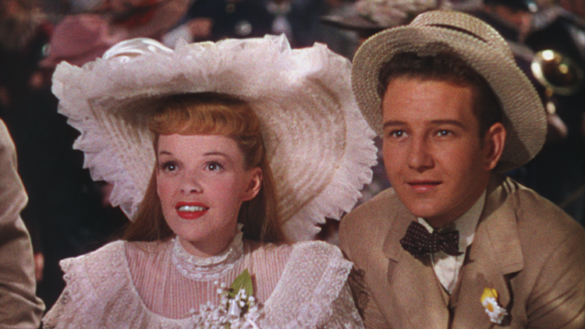 As we begin 2020, the floodgates are open for more movies coming out in theatres for the Oscar campaign, reassessments in the argument of what is cinema, and more special releases in the Criterion Channel that goes beyond their usual realm. Technicolor musicals, satirical approaches towards society, and the real-life grit of innocence lost have now graced the site for all to see. And if you’re like me with a nice metallic card recognized as a charter subscriber (humble brag!), you know what is new out there. So, here’s my latest cruise down the Channel.

In the 1940s and 50s, Technicolor musicals were becoming the instant hits for Metro-Goldwyn-Meyer and 21 of them are available. I saw several of them, namely the big hits that are much highly regarded to this day. One of the first big hits was Meet Me In St Louis starting Judy Garland, a beautiful piece of early 20th-century setting that gave us Garland in her first adult role following The Wizard of Oz. The film is one of a few in this category directed by Vincente Minnelli, who would marry (then divorce) Garland, but produce one child from the marriage, Liza Minnelli. Two notable Minnelli films, the Best Picture-winning An American In Paris and The Band Wagon, featured each of the leading dancing men who graced the screen, Gene Kelly and Fred Astaire. Of course, Kelly also served as co-director with Stanley Donen on Singing In The Rain, but there is a second film worth watching from the two, On The Town, which paired Kelly with Frank Sinatra. The variety of major musicals coming from this era was a high point in the genre, even outside of MGM, ending with the compilation film from 1974, That’s Entertainment!

Charlie Chaplin’s underrated silent film follows The Tramp stumbling into a job for a traveling carnival and falling in love with a horse rider. This movie was the hardest to make because of the number of problems in the way, including Chaplin’s legal issues with the IRS that help production up for months, a public divorce with his wife that lasted a year, and a large fire in the studio that destroyed most of the set. It took two years to finish and the result was the same as his other classics: a film about love, fantasy, and daily mischief from Chaplin’s legendary alter ego.

Elia Kazan took his America story to the growing television market with the story about a drifter (Andy Griffith) who rises in popularity from his local radio in Arkansas to the small screen in New York City. As his stature grows, so does his ego, which leads to his downfall. It was Griffith’s first film just a few years before his famed The Andy Griffth Show made him one of the most popular TV actors in the country. It serves as a self prophecy, showing a figure who takes his ballooned personality into areas out of his entertainment lane, notably the politics of it, very much like the man who occupies the White House now. In A Face In The Crowd, the golden age of television is both the lightning bolt that brings in fame and the killer of all TV lives.

Before he became the auteur we know him to be, Christopher Nolan’s debut showed the talent that would come in the future with his usual non-linear storyline about a London man who follows strangers around and follows one person into the criminal underworld. With a budget of $6,000, Nolan shot it on the weekends with a cast that had full-time jobs on the weekdays, a few crew members, and 16-mm black & white film stock to which Nolan saved by only shooting two takes of each scene. His three-minute short, Doodlebug, could also be seen and has the same luring style of Following, which came right after this short film. It is incredible the leap Nolan has taken from this to the Dark Knight Trilogy, Dunkirk, and now the upcoming Tenet.

One of the most amazing animated films in the 21st century, this adaptation of the graphic novel memoir by Marjane Satrapi follows her childhood in Iran and growing up within the Iranian Revolution to her rebellion amidst leaving Iran to France. It is such a progressive film, on how the animation is and how it flows moment to moment in Marjane’s turbulent early life with family origins, political strife, and Western values all colliding in a confusing time and how Marjane struggles to find her independence in two different worlds. Could it possibly mean it will get the Criterion treatment? They need more animated films and this will work perfectly.