Featured: Comedies can take a few notes from this summers Bad Moms 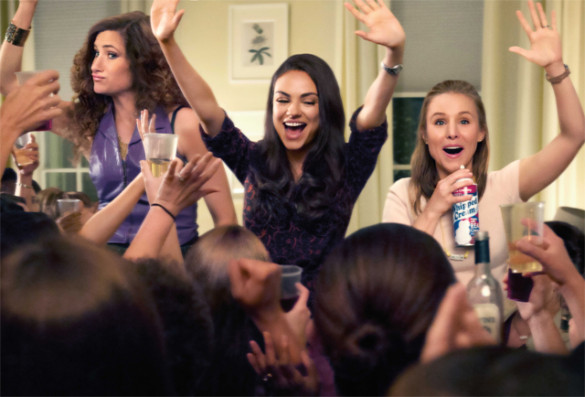 Films have always been a reflection of what is currently happening in our world today. It has always been the medium to help prove a point to a mass audience. One of the best ways this ideal is conveyed is through comedies. Comedies tend to poke fun, or mock current events in the world like, the presidency, or religion, or a certain lifestyle. It creates a lighthearted, laughter-filled, piece of cinema that also captures the idea of conveying a hidden message. And with a slue of comedies being released each year it’s hard for every one to be successful. But in 2016, we received a sleeper hit comedy film that I believe comedy filmmakers can take a few notes from; Bad Moms.

I know right? Bad Moms? You mean that movie that stars the girl from That 70’s Show and the weird wife from Step Brothers? Well, yes. I do mean that movie, and surprisingly it was a stellar viewing. Going in, I had not too sure what to expect when I sat down in the theater. I had seen the trailer and the trailer gave me a few laughs so I figured “Ah why the hell not?” But good God did this movie blow me away. The film tackles everything that I love about comedies while magically delivering a meaningful undertone throughout the course of the film. And I believe comedy film makers can take a few notes from this movie, so let’s get right into this.

First off, the goal of the story is right to the point, and incredibly simplistic. It does take a while for the film to uncover the goal but that’s okay. The “catalyst” or “inciting incident” that causes our protagonist to figure out her goal, lasts for probably the first 25-40 minutes. Which seems quite a bit too long, but before we dive into the goal we get to see the fun and games of what the film is about. Several messages underlay the film, one of them being that no matter how old you are, you’re allowed to have fun. So seeing these middle aged women go on a drinking rampage, destroy a grocery store, and partake in activities that usually are shown in male fronted comedies, is so god damn hilarious, I cried from laughing at least three times. The film absolutely delivers on every single comedic punch that it throws. Which leads to another incredible point of the film.

We all understand that men have had a priority over women in films, and have been over the past 100 years. But as the years go by we get more and more female fronted films. Now, this doesn’t necessarily mean that if a man or woman fronts the film that the film will be better or worse, but seeing a group of people, who happen to be females, partake in these hysterical activities, is quite hilarious. So the fact that we have this comedy, focused around debauchery and embarrassing yourself focus on women, brings a new perspective to the genre and makes it twice as funny. Another reason that this film delivers in absolutely every form of the comedic genre, is the directing and the writing.

Directors are in charge of getting the performance that they want out of the actor or actress. And their main goal is to not stop until they get the performance that they want, and a lot of times with comedy movies we get actors or actresses directing themselves versus the director at the helm. When comedy actors bring their own persona’s to a film, it ruins the story and the film overall. We’re no longer watching a comedy film, we’re watching Seth Rogen do stand up comedy. And this isn’t as effective, because if we wanted to watch stand up comedy, we would go watch stand up comedy. What makes comedy funny is that someone somewhere has thought of this hysterical scenario for these actors to be placed in. The willing suspension of disbelief is what keeps up coming back to comedy films, not seeing Seth Rogen dance around and be idiotic. And not that Seth Rogen movies aren’t funny, there are some incredibly funny moments in Seth Rogen movies, but it’s just Seth Rogen being Seth Rogen.

Filmmakers have the ability to create and immerse their audience into a hysterical scenario that is so off of the wall we would never in a million years be able to understand how or why, but that is what adds to the funny. The writing, the acting, the directing, those three things are what makes or breaks a comedy film. Comedy movies can learn a thing or two from Bad Moms. Have a simple goal, embrace the “fun and games” portion of storytelling”, do not let your actors bring their own persona to the table, actually direct them and get the performance that you want and is funny. The power is right in our hands to make incredible comedy films, but we keep letting the actors bring their own persona’s to the table. Directors have this job for a reason, so let them do their job, and we’ll see more hysterical comedies like Bad Moms.