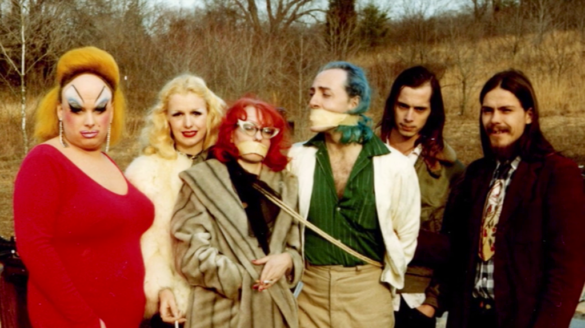 There are films for all seasons. As a film fan, I think we do ourselves no favor by staying comfortable and only watching films in our wheelhouse. A service like the Criterion Channel offers numerous opportunities to experience the entire calendar of said seasons, whether you “like” the movie or not. I use that particular representation of the word like, because, simply put, some movies are not made with you or your delicate sensibilities in mind. Some movies are meant to provoke, meant to force your hand into a reaction, almost dare you to walk away disgusted. And that perfectly brings us to John Waters and Pink Flamingos.

The plot itself focuses in on this disgust. A quick news splash shows us that Divine (Divine), the Queen of Filth, has disappeared. At first, it is not clear why, and one might assume that she has made an exit out of shame. But it is quickly revealed that the world at large (at least the world that director John Waters shows us) is obsessed with filth and hounds her. In support of this, the Marbles, another filthy couple, are solely focused on taking her crown. Connie (Mink Stohl) and Raymond (David Lochary) believe they deserve the title for, among other things, kidnapping, raping, and impregnating women for the purposes of selling the children to lesbian couples.

Pink Flamingos is also a film that would not be improved by an actual budget. It was shot on a micro budget of $10,000 dollars and, of course, it shows. But this only adds a sense of realism (for lack of a better word) to the proceedings. There have been complaints made about the poor, presentational acting, but this seems, like most everything else here, purposeful. The story is wildly dramatic, there is a grown woman living in a baby’s crib, for god’s sake. Everything, and I mean everything in the film is designed to draw you attention, to force you to look at this, well, filth.

Divine’s performance is what holds this all together. He (preferred pronouns through my research) manages a feminine presentation of this character which contains both moments of gentleness (usually at the homestead) paired with violent counterculture explosions. There is a particular scene that sticks with me (no, not that one, you sicko) in the beginning of the film. Divine and her son, Crackers (Danny Mills) driving their car at reckless speeds. Divine cackles and flips her middle finger to the world of normal, suburban life. This is obviously a purposeful choice, as are the individuals who are affected by this. A jogger, the representation of the burgeoning yuppies, and a veteran returning from war, a screw you to the American government, attempting to subdue its filthy underclass.

Plot wise, Waters does something wildly unexpected and clever. By introducing the absolutely disgusting (though entertaining) Marbles couple, he angles us towards rooting for Divine and her filthy family. We enjoy her tirades and escapades through small town life, despite her obvious depravity. It is a smart decision not only to focus on this group, but on Divine in particular. There is both a sweetness to her and a joy in living through her disgusting behaviors, mainly due to the extremity of them. How does one take cannibalism seriously when it is portrayed in this way?

But then, the end of the film happens. Waters is figuratively pointing the gun at the audience through the hands of Divine. The film brings the audience into the story under the guise of reporters tracking down the Queen of Filth. We watch a kangaroo court in which Divine doles out quick and violent justice to the Marbles for “the crime of assholery.” Of course, they have done plenty wrong, and possibly even deserve this fate, but not for the reasons Divine espouses. It is notable that Waters chooses not to show their deaths directly, only the aftermath. I do not believe that this is a budgetary decision, but rather that he wants the camera focused on Divine. On Divine and you. Are you upset by these deaths, or are you rooting for them? And what exactly does that mean about us? We have sat in our seats for nearly two hours supporting depravity without thinking for a moment about repercussions. Well, here it is. Now sit in it and stew.

Pink Flamingos is an attack. If there is no material here that you find even mildly objectionable, I believe that Waters would be both surprised and a little curious. There is cold blooded murder, masturbation, incest, animal cruelty, and, as is well known, even scatalogical cuisine. Pink Flamingos is reactionary art in the best, most pure sense. For those not indoctrinated into Waters (besides the comparatively very tame Hairspray), it is simultaneously the best and worst film in which to begin your journey. Pink Flamingos is rare. A challenging, but still entertaining watch, no matter how much you try to deny it.

Join us next month for more movies leaving The Criterion Channel!