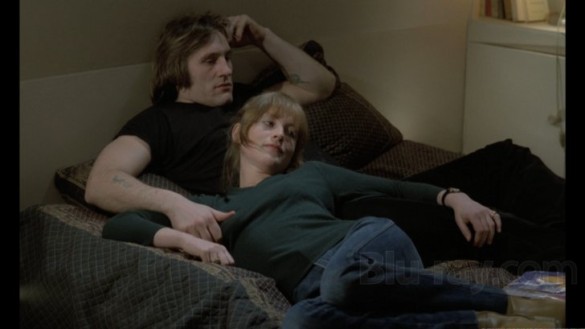 Hello and welcome back to Criterion Crunch Time!  I’m surprised it took this long (4 movies total), but this week, we are watching our first French film. This month, one of the directors that has a handful of movies making their exit is Maurice Pialat. The film I chose, mainly because of the stars, is 1980’s Loulou.

Many of Pialat’s films are assumed to be autobiographical and Loulou especially so. The film mainly follows Nelly (Isabelle Huppert) as she strays from her husband, Andre (Guy Marchand), and tedious middle-class life. Her temptation is personified by Loulou (Gerard Depardieu), a lower-class criminal, just out of jail, who she meets at a nightclub. Of course, her life with Andre is not merely boring, as he has a temper that is easy to set off. Huppert, unsurprisingly, plays this perfectly as a woman who has seen these tantrums before as she grins and bears it. At least until she just cannot take it anymore. That mildly bored, haughty expression that she wears so easily serves the character of Nelly very well here. Loulou is not exactly a subtle film, as it becomes easy to root for Nelly to leave after being slapped around and yelled at by Andre, but subtlety or lack thereof is not why this movie will work.

If Loulou is going to work for you, as it mostly did for me, it will be because of Depardieu and Huppert. From an American, modern perspective, we just do not see pairings like these two. And I don’t mean from a physical perspective, although they are both beautiful (if you only know him from modern films, you are not prepared). There is a sexual charge between these two from the moment they come in contact with each other. Especially in comparison to a later scene between Nelly and Andre, every moment she and Loulou are together seems packed with either sexual tension or sexual release. There is also a certain joy and even silliness that is not often shown on screen. After all, during their first sex scene, one side of the bed breaks and they have to deal with this interruption before continuing their fun. There are certainly missteps even within these moments. Did I mention subtlety? There is literally a moment in which Huppert drinks cream from a side table with tea and the liquid drips off her chin.  Enough said.

Now, Loulou is not simply a fun tryst with these two. As their relationship progresses, Nelly finds out she is pregnant and, for a brief moment, considers having the child. But one of the things that Loulou is examining is the class structure in France during this time. Nelly is no longer comfortable, and importantly, Loulou is the type of man who only works when he must. Not exactly the perfect father figure. After spending time with his family, although having a good time, the audience can absolutely see the hope leave Nelly’s eyes as they rib him about not working and essentially being shiftless.

When Nelly decides to have an abortion, it is striking how emotionless it is, at least at first. However, when she returns home, lying in bed, she is forced by Loulou to answer as to why she made this choice. Smartly, Pialat keeps his camera trained on her as she calmly explains to him that he is not fit to be a parent. Obviously, Huppert is a gifted actress, but these moments really hammer this point home. She is able to show great emotion without a quavering voice or tears. We know this hurts her, even though she stays even emotionally. It is important to note though, that the film does not end with a gigantic blowout fight between the two. At some level, they both accept each other, even if they don’t quite understand the other’s perspective. Nelly and Loulou come from different worlds, they will probably never connect with each other fully, but that passion never strays. As a matter of fact, the film closes with them giving in to urges of a kind, as they stumble down a street together, clearly under the influence of alcohol. Will they grow old together? Raise children? Probably not. But they have that special something that ties people of different backgrounds together. And even if that is fleeting, it is a powerful bond.

As we close out our first month of Criterion Crunch Time, I am struck by the variety of films available on this service. There are directors that every cinephile knows, young directors of color, genre-bending exercises, and films that may be well known in Europe but less so in American. And that is just after four movies! Usually, here is where I would tell you what’s next, but I honestly don’t know.  But in about a week, Criterion will announce a new batch of departing titles. So stay tuned here to find out what film classic we will have the opportunity to watch next month!

Join us next time as we take a look at a revisionist western, Devil’s Doorway!