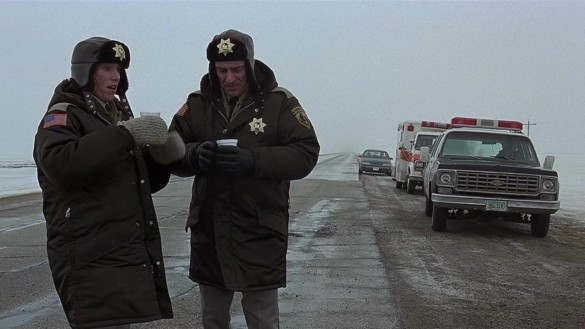 It’s been 25 years since Joel and Ethan Coen, in their smorgasbord of dark-comedy delight, released one of their masterpieces: Fargo. Their early career was filled with key films like Bloody Simple, Raising Arizona, Miller’s Crossing, and Hudsucker Proxy. But if we talk about their vast filmography as a whole, Fargo was the film that catapulted their filmmaking to a whole new level. So what do you get when you have a pregnant police officer and place her in the frozen tundra of North Dakota to a semi-true (or not) story following a slew of murders? A great film, don’tcha know?

Fargo begins with a thunderous orchestral score by Carter Burwell as it beckons the audience towards the tragic events that are about to unfold. The first domino is about to fall as one of our antagonists drives towards us in the blinding white snow. Jerry Lundegaard (William H. Macy) is a skittish man, a man who’s clearly not made for a life of crime. He’s made a straightforward deal, “no rough stuff,” with two ex-cons to kidnap his wife. Therefore, his father-in-law will pay her fake ransom, and Lundegaard will split it, payoff the criminals, and payoff the large secret debts he can’t seem to get out from under. Easy enough, right?

The two criminals initially adhere to the orders. Carl Showalter, played by the still fresh-faced Steve Buscemi,  is described by locals as a “funny lookin’ man.” An “in and out” sort of guy —mostly just in it for the money. His partner is the factor he can’t control. The bleach blonde psycho, known as Grimsrud (Peter Stormare), is well beyond creepy. His favorite things in life seem to be violence and pancakes. When the simple kidnapping goes awry, the easy come, easy go kidnapping takes a grim turn of events. The chaos is soon investigated by the one and only Marge Gunderson (Frances McDormand), a police officer in Brainerd, Minnesota. She’s seven months pregnant, or “carrying quite the load,” as she likes to refer to it. Marge is sweet and excusing of other people’s odd behavior, but tough and stern when those she questions begin to push her too far. Marge’s keen eye for detective work, and the criminals’ greed, pushes the case into the depths of chaos and bloodshed.

The excitement of Fargo builds as the audience falls deeper down the rabbit hole. Fargo credits Joel Coen as the sole director of the film. However, IMDb marks Ethan Coen as an uncredited second director. I’m sure it’s hard to have one without the other, considering the two wrote the screenplay. The Coens, in their elite filmography, perfectly blend together shock and awe with moments of comedy throughout the film. A dark comedy in its purest form. It’s odd to think that one scene can have a man’s foot being grotesquely hammered into a woodchipper, and in that same scene, a character’s mannerisms can cause a chuckle to escape your mouth.

Unlike many films that slowly ease you into the thick of the story, Fargo gets right to it. The early title card “Based on a True Story” has had many on a merry-go-round whether to believe if the story is truly based on true events. The Coens have since cleared this up by stating that some of Fargo’s chilling elements are actually true. Which ones, you ask? Well, that only adds to the mystery.

In 1997, Fargo was nominated for seven Academy Awards and went on to win Best Original Screenplay for the Coens and Best Actress for Frances McDormand. 25 years after its release, Fargo still lives on as one of the Coens’ best films with some of the greatest characters cinema has ever seen. In 2014, the film also spawned a series, by the same name, on FX, which has four seasons and several awards under its belt. Not too shabby for a crime film set in the snowy white depths of Fargo, North Dakota.