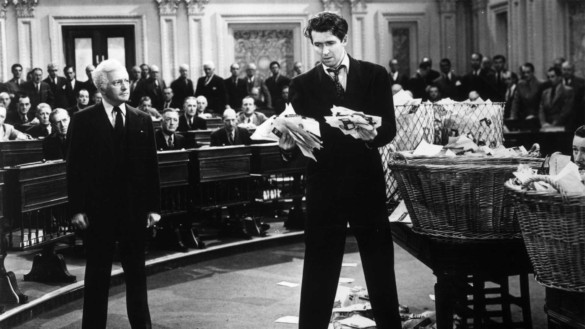 The year was 1939. Hitler was in power, Britain just declared war with Germany, and the United States was playing jump rope with the possibility of going to war. So upon hearing the premise of Frank Capra’s Mr. Smith Goes to Washington, politicians argued that a film of this type should not be released as it would paint a bleak picture for audiences that these situations actually happen within the government. Joseph Kennedy Sr., Ambassador to Great Britain, sent a telegram to Will Hays, head of Distributors of America, and exclaimed that Mr. Smith was in his opinion, “one of the most disgraceful things I have ever seen done to our country.” However, contrary to Mr. Kennedy, Mr. Smith isn’t a negative piece of propaganda, but rather a story of an idealistic man looking to do good for his country.

Jefferson Smith (Jimmy Stewart) is an honest man, a tad naïve, and more than a little wet behind the ears. He’s a hopeful idealist as his sweet nature has brought him to be a leader of the Boy Rangers. After the death of his state’s senator, Smith is appointed by the senate through the recommendation of the state’s senior senator, Joseph Paine (Claude Rains). Paine, a once good man, has over time become poisoned by political corruption. Along with an intimidating man, Jim Taylor (Edward Arnold), the men reveal themselves to be the epitome of back door dealings within the government. Their plan is to influence Smith to vote for a bill that would initiate the construction of Willet Dam. But these scheming politicians have underestimated the strength of Smith, who upon finding out about this bill, fights for what is right.

Based on Lewis R Foster’s unpublished story, The Gentleman from Montana, you won’t hear states’ names or the character’s political affiliation in Mr. Smith. I’m sure you can paint that picture yourself. Jimmy Stewart is no stranger to playing the “good guy” in films. He inherited the role after Gary Cooper’s schedule conflicted with other projects. We see Stewart as a 30-year-old man at the beginning of his career — fairly new to the film industry world.  His newbie persona translates perfectly to his performance of Smith as an equally wide-eyed man entering his career for the first time. Smith’s passion for his country is a breath of fresh air. The rest of the D.C elite don’t seem to have that anymore. They have taken advantage of the history that envelopes them, and become too comfortable with their positions of power. Smith begins to change people’s outlook on the government with his vibrant enthusiasm, and the belief that the government can lookout for those “lost causes” if they only tried. He even begins to tear away the hard exterior of his secretary Clarissa Saunders (Jean Arthur) as they sit in his office writing a new bill for a summer camp that would benefit young boys around the country. But where is the location for this new camp? You guessed it, a quarter-mile on both sides of Willet Creek — Senator Paine’s location of the new dam. Mr. Smith is a good-hearted film, filled with romanticism for our country. So why the political objections?

A while ago, I read an analysis of Mr. Smith being told as a radical view of politics. The author of wrote that Smith’s views are bordering on Fascism. You can dive deep into the message classifying Smith as unfit, or maybe even a radical if you so choose. But I say to those people, you’ve missed the true message at the center of the movie.

This is director Frank Capra’s opus for the country he so loved. He dissects the process and sheds light on roadblocks of political corruption, too often holding back this country from being a sincere land of opportunity. So while some may find negativity in Capra’s direction, I find love. In the scene when Smith first arrives in Washington D.C., he takes a tour of the capital, soaking up the monuments of our forefathers (including the Lincoln Memorial). Capra himself is in awe.

Capra often portrayed his characters with heavy-handed messages, which critics at that time dubbed “Capra-corn.” But the Sicilian born director prided himself on living in the United States. Now this idealistic outlook may seem more like a blur now. But through Capra’s eyes, we imagine the hopes that our forefathers had one day dreamt for us. Using our voices to stand up for those that need our help.

Mr. Smith garnered a total of 11 Oscar nominations (including Best Picture). This in a more than stacked Oscars ceremony honoring those films released in what film scholars would call the best year for film. Mr. Smith Goes to Washington is a must-see classic. A classic that still powerfully resonates in today’s world. Maybe Smith’s love and admiration outlook for the government may seem too distant to fully grasp, but I believe there is hope. As the Colombia Pictures logo transitions to the screen at the end of the film, we sit, brought back to the harsh reality of our government’s current state, and the outcome of an important election. We sit in silence, hoping that our government of the people, by the people, for the people, shall not perish from this earth.