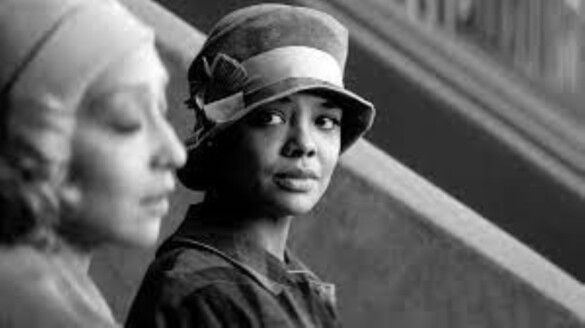 Using the word “chameleonic” is often a way for a writer to express how an actor on screen differs from their previous roles, the roles they’re known for, the roles that define how an audience sees them. It’s also a signifier to the reader that this actor is going above and beyond, doing something they’ve not done before. Though, when every role in an actor’s oeuvre is a rich tapestry to showcase the performer’s talent, it’s much harder to come up with a term. How does a writer define an actress as indefinable as Tessa Thompson?

More often than not, there are character traits Thompson has been drawn to as an actress. Thompson often plays bold, outspoken, fierce women who can wither someone with a glance or a choice barb. She moves from role to role effortlessly, but she’s such a force that it’s rare to see the character behind the dynamic actress portraying her. We always understand her as Tessa Thompson after the lights come up.

That’s what makes Thompson’s performance in Passing so engrossing and worthy of praise. She’s able to be Irene. The layers upon layers of who Irene is, who we suspect she is, and who she presents to the world are all at play in Thompson’s performance. Even the meaning behind the word passing shifts in Thompson’s capable hands. There are moments that play out across her face that are an entire unspoken subplot. It’s obvious from the first looks she shares with Clare, played brilliantly by Ruth Negga, that Irene is in love with Clare. Irene’s jealousy, covetousness, and desperate need when it comes to Clare play out in glances. Without uttering a direct word, Thompson is able to convey the anguish every queer, questioning, and LGBT+ person has gone through when they can’t be with the person they want to be with.

In the brilliant dance hall scene, while Irene holds Clare’s hand, it’s almost like there may be hope. It’s as if there could be a true connection between them understood by both parties. As the two of them look in each other’s eyes, an understanding emerges. Then when the hands part, the heartbreak is all too real, the pain is palpable as we see every anguished beat of it come across effortlessly in Thompson’s facial expression.

Tessa Thompson has had many roles worthy of recognition. From Dear White People to Creed, from Sorry to Bother You to Thor: Ragnarok, but to pass up her work here would be a mistake. It would be to dismiss one of the most beautifully layered performances of the past year, one that will have meaning to so many people in so many different ways.