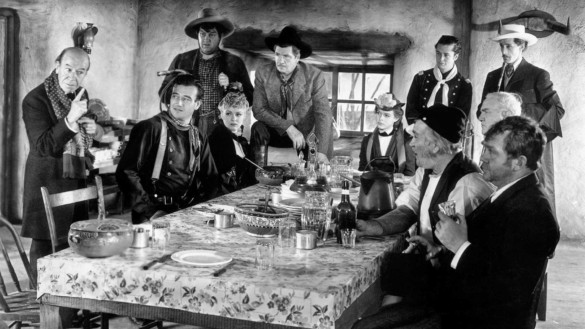 The introduction of John Wayne’s The Ringo Kid in John Ford’s classic western Stagecoach (1939), remains one of the best character introductions in all of cinema. Up until to this point, Ringo’s name and his presence has been floating around in the background. We are supplied with little snippets of information: he’s an outlaw who has broken out of jail seeking revenge. There’s a mysterious aura surrounding this character with Ford and screenwriters Dudley Nichols and Ben Hecht, deliberately keeping us in the dark. Is Ringo dangerous? Can he be an ally to our merry band of weary travellers? These questions plague our mind throughout the film’s opening minutes.

Then Ford and cinematographer Gregg Toland introduce Ringo/John Wayne to us in all of his glory. The camera swoons upon the first sight of Wayne as he twirls his shotgun. You may be wondering whether ‘swoon’ is the correct word to use, but there’s really no other word that can describe the giddiness of the camera. In this one moment, Ford doesn’t care about realism, or the rules of filmmaking.The camera breaks free of the constraints of rigid principles of traditional filmmaking, and here it’s almost as if the camera has a mind of its own.

Rather than using editing to cut to a close-up of Wayne’s face, Ford makes the decision to have us swoop in for a better look. For a brief second, the shot becomes hazy and out of focus, as we move in from a mid-shot to that close-up of Wayne. His entire face fills the frame, and he embodies everything that we so desperately seek…boldness, assertiveness, and confidence. As introductions go, this was Ford’s fanfare announcement to the world, here’s the arrival of a true Star.

Of course, this wasn’t Wayne’s first rodeo. He had been making Western pictures throughout the 1930s, mostly B-Movie schlock, known as Poverty Row Westerns. If it wasn’t for the success of Stagecoach, he may have been doomed to remain a B-Movie Star. Ford took a gamble with hiring Wayne, a gamble that producers David O. Selznick and Walter Wanger couldn’t exactly see eye to eye on. Ford would part ways with Selznick over the casting of John Wayne. The reason why Ford had even sought out the financial back from these independent filmmakers was down to the fact that no major studio would put up the money.

Looking back at how the Western genre came to dominate film, it seems hard to imagine that was ever a time that the major studios were wary of making big budget Westerns like Stagecoach, which had a budget of over $500,000. However, you can’t exactly blame them, the last big budget Western (which coincidentally starred Wayne in his first leading role) had been the blockbuster bomb, The Big Trail (1930). Ford himself had passed on and had given the script over to his friend Raoul Walsh, to direct. In actual fact,Ford hadn’t directed a Western since the silent era, with Stagecoach marking his return to the genre.

The tagline of the poster “A Powerful Story of 9 Strange People” gives you all the information you really require going into the film. For 96 minutes we follow a group of strangers riding on a stagecoach through dangerous Apache territory. These nine strangers come from different social classes and bring along their baggage (both in the figurative and literal sense). There’s Dallas (Claire Trevor, who would get top billing over Wayne), a prostitute who has been driven out of town; Hatfield, a professional gambler (John Carradine) who joins in order to assist pregnant Lucy Mallory (Louise Platt), who happens to be travelling to join her cavalry officer husband; there’s the drunken Doc Boone (Thomas Mitchell), whiskey salesman Samuel Peacock (Donald Meek) and lastly there’s banker Henry Gatewood (Berton Churchill) who is up to no good and seems to be in a real hurry to get out of town.

The stagecoach is driven by Buck (Andy Devine) who acts as our comic relief, who is joined by his shotgun guard Marshal Curley Wilcox (George Bancroft). Along the way they come across Ringo, who has broken out of prison after hearing that his father and brother had been murdered by Luke Plummer (Tom Tyler). Over the course of the journey, the stagecoach must fend off attacks from the likes of Geronimo and his Apaches, which results in a climatic third act full of stunts and action that still holds up today.

In terms of plot, Stagecoach seems so familiar and ingrained into our conceptions of what makes a good story. It’s simplicity is what makes the film so easy to ingest. It may not shake the foundations of the genre, in the way that Butch Cassidy and the Sundance Kid did, and in that regards, contemporary audidences may find it all a little twee and quaint. Instead, what Stagecoach successfully does is lay the foundations for the great Western film that would come to dominate the cinematic landscape for the next couple of decades.

Where Stagecoach seems to flatter is in its pacing, the first opening ten minutes drag on as we are introduced to all the characters, and there’s a slump in the levels of action towards the second act. However, its major flaw is in its depiction of the Apaches and the Mexcian characters are deeply problematic and as a contemporary viewer it leaves a bad taste in your mouth. Both Ford and Wayne would go on to have long careers in Hollywood, with Wayne appearing in nearly two dozen of John Ford’s films over twenty years. It’s hard to imagine that we came close to never having these two talents transform American cinema.