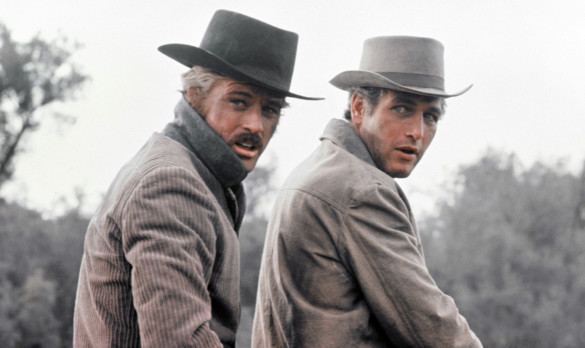 Despite being a huge fan of American cinema of the New Hollywood era (which ran from 1967-1980 give or take a couple of years here and there), I must confess that I have never watched Butch Cassidy and the Sundance Kid until now! Released in 1969, Butch Cassidy and the Sundance Kid was the top-grossing films of the year. It starred Paul Newman, and the then virtually unknown Robert Redford, along with Katharine Ross, and was directed by George Roy Hill, and written by William Goldman.The film paid homage to the classic Westerns that had come before it, but it also reinvented the ‘anti-hero’ and marked the change in attitudes towards the Western Genre as a whole.

The events that take place in the film are very loosely based on fact, Hill and Goldman weren’t necessarily interested in depicting a truthful version of the story. Goldman was more interested in focusing on the friendship between the two characters, and essentially Butch Cassidy is a buddy film rather than your standard Western Pic. The film tells the story of Wild West outlaws Robert LeRoy Parker, known as Butch Cassidy (Newman), and his partner Harry Longabaugh, the “Sundance Kid” (Robert Redford), who are on the run from a crack US posse after a string of train robberies.

Butch and Sundance aren’t exactly heroic; they rob anything whether it be trains or banks, and they don’t seem to be fighting for a cause. In fact, they just want to live the high life in the easiest way possible. Whereas, usually we would be rooting for the authority figures who are tasked with bringing these two troublemakers in, we are on the side of Butch and Sundance, something that was becoming increasingly popular in Holywood pictures of the day with the release of Bonnie and Clyde a couple of years prior to this picture. The heroes of 1969, were those who disobeyed the rules and fought back against authority. They were free-spirits who roamed around, never settling for long periods of time, whether they be the bank robbing couple of the depression 1930s, the contemporary stoned out hippies from Easy Rider or the effortless cool and charming outlaws in Butch Cassidy.

The journey from page to the big screen was a long and tedious one. In fact, Goldman had been researching the true story of the outlaws Harry Longabaugh and Robert LeRoy Parker since 1959. By the mid-1960s the Western Genre had vertically all but disappeared from the big-screen, a new audience was emerging and with that filmmakers such as Ingmar Bergman, François Truffaut, Federico Fellini, and Roman Polanski (to name a few) were exploding onto the scene. Their films offered more and appealed to the youth of the day. Films from these European filmmakers depicted more sex, violence and nudity. While, the Hollywood film studios of the 1960s were still churning out high budget musical disasters such as Dr. Dolitte, Hello Dolly! and Camelot, all of which bombed at the Box Office.

Goldman’s script ticked all the right boxes, although the violence by today’s standards is mild, the film still ends with a bloody shootout. And the film follows two antiheroes who run away, something that was unheard of at the time. Goldman’s script proved to be too controversial for some studios, Goldman recounted a conversation with a studio head, who said “‘Well, I’ll buy it if they don’t go to South America.’ I said, ‘But they went there!’ He said, ‘I don’t give a s***. All I know is John Wayne don’t run away.’” It seems baffling that studios were still stuck in their ways regarding the Western Genre, and refusing to allow writers to reinvent the Western and challenge the mythos of the genre.

Luckily for Goldman, and  thanks to the hard work of Goldman’s agent Evarts Ziegler, 20th Century Fox brought his script. Hill was brought on board to direct, on the basis that Paul Newman would star in the film. However, finding someone to co-star alongside Newman as Sundance proved to be a much harder task. Names such as Jack Lemmon, Steve McQueen and Warren Beatty were chucked around. It was Newman’s wife Joanne Woodward who suggested Redford, who had appeared in a few films but was better known as a stage actor. It proved to be a good call, as both actors have brilliant chemistry together, bouncing their lines off one and other, and proving to be one of cinema’s most iconic duos.

Butch Cassidy is a visually beautiful film to gaze upon. It was shot by Conard Hall, who is known for his work on films such as In Cold Blood, Cool Hand Luke, American Beauty, and Road to Perdition. His cinematography has this softness, dreamlike look that is reminiscent of a lazy summer’s afternoon. There’s a warm, golden glow to the picture that gives it the appearance of an old silent picture shot in sepia. The film actually opens in sepia with a short silent film that details the adventures of ‘Hole-in-the-wall gang’. And, of course, who can forget the film’s infamous freeze frame ending that remains one of the best endings in cinematic history.

The bicycle scene in which Butch rides around with Etta (Ross) feels slightly dated now thanks to the song “Raindrops Keep Fallin’ on My Head” which I feel as been used so often that its becomed cliched. Reviews upon the film’s release were mixed, Roger Ebert stated that the film started off well but its quality worsened as the runtime continued. I can sort of see where Ebert was coming from, the film does feel like two pictures in one. However, it’s not as jarring as some critics claim it to be and nor do I feel that the quality of the filmmaking goes down, it stays consistent throughout.

In short, Butch Cassidy and the Sundance Kid remains one of the best films of the New Hollywood era. It may not be as hard-hitting, or as downbeat and serious as other pictures from that era, but it’s perhaps one of the most fun and entertaining. I feel like kicking myself for not getting around to watching it sooner, but I am so glad that I did.