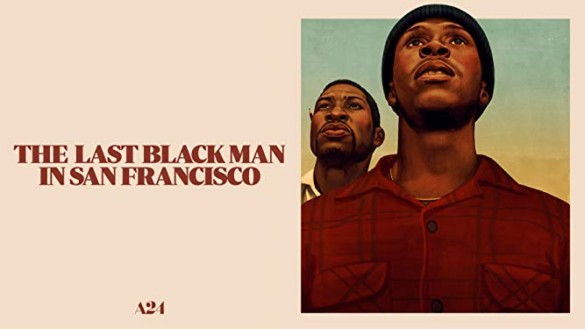 Synopsis: A young man searches for home in the changing city that seems to have left him behind.

“There’s a whole generation with a new explanation. People in motion.” – John Phillips and Scott McKenzie

Our childhood dwellings are powerful creatures; they hold histories of a particular place and time that have come to define our most innocent years. But just like us, they too must grow and change with their surroundings. As is the case of Jimmie Fails and his own childhood home, a structure which takes on a personality of its own in The Last Black Man in San Francisco. It’s architecturally beautiful but belonging to a different time, before his neighborhood experienced a cultural changeover. This may sound like an overt look at gentrification in one of the world’s most expensive cities, but The Last Black Man in San Francisco takes a more indirect (and gorgeous) approach.

Based on Jimmie Fails’ own upbringing, Joe Talbot’s directorial debut is told from the lens of someone who remains ignorant toward the inevitable restoration of San Francisco. Jimmie (playing a depiction of himself) longs to reclaim his old childhood home, seeing it the way he always remembered it, through innocent eyes. But since childhood, the demographics of his old neighborhood have either changed or been displaced, primarily due to the financial complications of the current housing market. Whether Jimmie Fails is truthfully unaware of San Francisco’s redevelopment, or just simply refuses to accept it, it doesn’t matter; this makes for a film that feels beautifully nostalgic and innocent, and relatable to anyone among any race or culture who has ever felt like a stranger in their hometown.

Newcomer Jimmie Fails is terrific playing a version of himself (even sharing a story credit with director Joe Talbot). Jimmie fights to reclaim his old childhood home to the point of obsession (sometimes leading to some surprisingly humorous moments), and Fails gives a complex performance that is just as poignant as it is antagonistic. In many respects, he is just as much a victim of displacement as he is the villain of his own story, arguably more drowned in ignorance as a result of separation anxiety from his old home. Jimmie is joined by his friend Montgomery (Jonathan Majors), or Mont for short, whose desires are rooted in the artistic and the creative (he longs to be a stage director). His creative juices characterize him as Jimmie’s own “Jiminy Cricket”, his conscience and guiding light of sorts. It’s Mont who helps show Jimmie the nature of an ever-evolving San Francisco, with a performance that should just give Majors the Oscar right now (if Majors isn’t even nominated, it’s proof how ignorance also runs deep within The Academy).

Jimmie and Mont’s place in this world has changed, sometimes to the point of having to put on a persona in order to fit within a new demographic’s perception of them. Jimmie and Mont don’t give in to the stereotypes though; they stay true to their warm upbringings, refreshingly portraying the tender and humanistic side of the African American community (something Jimmie Fails has also commented on during interviews). A friend from their youth named Kofi (Jamal Trulove), however, is arguably the opposite, perhaps giving in to their community’s new perception of the toughness of black men. Despite their contrasting behaviors, Jimmie and Kofi are direct parallels of one another in their respective hypocrisies, as it relates to how their town has evolved over the years. Kofi’s conduct may arguably be a façade, a response in how he feels he should be viewed, but it’s Jimmie who blindly looks back at his prior place in this world as if nothing has changed (he even greets his new elderly white “neighbor” as if it isn’t anything strange). As stated at one point in the film, “people aren’t just one thing”; not only is it a necessary revelation (during a climatic form of “performance art”), it may also be the world’s most needed message right now.

Despite all of this, it is Jimmie who arguably knows the most about the heart of San Francisco. At one point he states that you “cannot hate San Francisco until you love it first”, showing how ignorance can be a common byproduct of gentrification and urban displacement, an ignorance demonstrated by the city’s new inhabitants for not realizing the effect they’ve had on those who built the city, but also from those who have now been displaced and still refuse to accept it. But Jimmie slowly learns to accept it, in a final scene that is simultaneously tragic as it is hopeful, despite its inevitability. It’s a signal of rebirth for Jimmie, emotionally enhanced by the film’s beautiful score by Emile Mosseri (so jazz-inflicted as if it were influenced by the musical history stemming from the Bay area), as well as Adam Newport-Berra’s ethereal cinematography. This is a film that requires San Francisco to feel like its own character, and director Joe Talbot captures the city landscapes with such cinematic immensity.

Perhaps John Phillips and singer Scott McKenzie should be proud for (inadvertently?) calling this out way back in 1967, as the tender ballad “San Francisco (Be Sure to Wear Flowers in Your Hair)” takes on a whole new meaning today. The Bay area’s culture may have changed, but its love still exists within its people, no matter where they are now.