Movie Review: Philomena is year’s best “based on a true story” movie 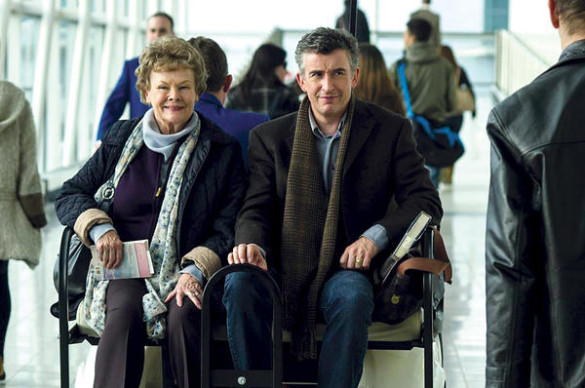 Director: Stephen Frears (High Fidelity, The Queen)
Writers: Steve Coogan, Jeff Pope, based on “The Lost Child of Philomena Lee” by Martin Sixsmith
Starring: Judi Dench (Skyfall, Shakespeare in Love), Steve Coogan
Synopsis: A world-weary political journalist picks up the story of a woman’s search for her son, who was taken away from her decades ago after she became pregnant and was forced to live in a convent.

The true story of Philomena Lee’s half-century search for her son didn’t take nearly as long to reach the big screen once the book was published in 2009. It should take only one time through the film or book to realize why. Tackling controversial subject matter is nothing new for Stephen Frears, as he successfully directed The Queen in 2006 which was destined for controversy regardless of how Her Majesty was portrayed. However, this time he chose to take on a story that involves the Catholic Church and the Irish government incarcerating over 10,000 women in state-run Magdalene Laundries (see: Ireland apologises for ‘slave labour’ at Magdalene Laundries) and selling their children in such a way that they theoretically could never reconnect. Frears masterfully and delicately handles each plot turn and development and delivers what is easily one of the year’s most captivating, eye-opening, and important films of 2013. The way that Philomena Lee is portrayed, the accuracy of the Church’s horrific actions, and the overarching delivery of it all combines for some very overdue cinematic justice to thousands of victims. The story never gets boring or muddled and the performances Frears’ delivers to the screen from a superb cast are indeed memorable.

The screenplay was based on The Lost Child of Philomena Lee which was written by Martin Sixsmith (the character portrayed by Steve Coogan in the film). By all accounts I’ve come across, the screenplay stays true to the story for the most part, giving a much more accurate adaptation than Hollywood usually delivers. Of course, the film was produced by the BBC as well as some credit going to Canal+ and the British Film Institute. What you need to know is that the screenplay injects humor and grace into a story that could easily play entirely dark. The criticisms of religion are almost entirely avoided in order to bring the focus directly on this particular situation, and although Martin and Philomena do go head-to-head at times with Sixsmith being the non-believer, it is tastefully done and shouldn’t anger either demographic.

Judi Dench portrays Philomena Lee in such a way that audiences will not only fall in love with her but also the performance. Similar to Robert Redford’s performance earlier this year, Dench gives us a performance that utilizes the experience of her veteran A-list status and incorporates the wisdom of Philomena’s story and situation. Coogan is the perfect supporting man (or in this case newsman) for Dench and he seems to know how to let her showcase her skills and still hold his own. Together, they make for one of the best on-screen pairs this year. Dench’s range may not be on the level of Redford’s in this film, but with Philomena being an optimistic and enthusiastic sweetheart of a lady, she didn’t need to focus on extremes. She is consistently Philomena and never Judi Dench, a compliment rarely given to or earned by established stars.

Frears manages to employ the composing talent of Alexandre Desplat again who received an Oscar nomination for his work with Frears on The Queen back in 2006. Since then, he’s been nominated for scores for The Curious Case of Benjamin Button, Fantastic Mr. Fox, The King’s Speech, and Argo. It goes without saying that this guy is at the top of his game, and he again produces a great score to go along with a great movie. He likely won’t receive an Oscar nod this year simply due to the fact we’ve had so many great scores, but this is one of the hidden gems of 2013.

If you love movies, you should see Philomena. Stories like this are stranger than fiction, and thankfully Philomena provides a nice way for audiences to learn a great deal and enjoy a great movie at the same time. Judi Dench should get a ton of recognition for this, but an Oscar win seems unlikely. That doesn’t really matter though, since this film is in itself a great achievement for all that were involved.