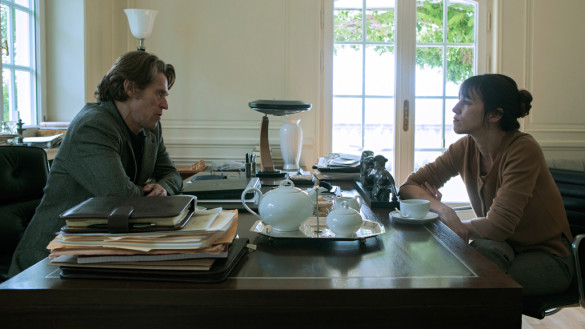 Synopsis: The continuation of Joe’s sexually dictated life delves into the darker aspects of her adult life and what led to her being in Seligman’s care.

DIRECTION
In Nymphomaniac: Vol I, Lars von Trier throws us into the world of sex addiction in the way only von Trier can do. Part II however, while not as graphic overall, takes a deeper, darker turn. Von Trier continues the flashback story device but kicks it up a notch it terms of maturity and brokenness. The film overall seems more grey in terms of aesthetic and the ambiance becomes very bleak. However, even in it’s bleakness, von Trier uses brilliant dialogue and metaphors that is gripping and sometimes even visually appealing. Part II, while more dark, was still fluid in terms of telling this story, until the third act, which becomes something that Hollywood would be proud of. The film turns into something more contrived and feels very out of place, leaving a feeling of disappointment and a bad taste in your mouth.

SCRIPT
The script for Nymphomaniac: Part II is a bit twofold, which may work for some, but oveall feels a bit distant. The first two acts continue the brilliance of telling this story of addiction, how insecurity and lonliness become driving factors and then drives it off of a cliff. Joe continues her struggle as things become worse and worse. She starts to lose the feeling of pleasure and this leaves her more desperate than ever. She becomes careless and eventually becomes pregnant. Even with a child, one you can tell she adores, she does everything in her power to bring her pleasure back and this is always her main focus. The repercussions of neglect are never on her mind until it becomes too late. Sex therapy, counseling and support groups are explored in some fascinating ways as you see the addiction start to eat her alive. At times her fight is pure and strong, but it’s the mental fight that von Trier explores that’s very compelling. Well, at least until the third act arrives. At this point, von Trier…goes Hollywood? Everything up to this point felt natural and authentic while bathing arduousness and bleakness, which was anything but mundane. However, the last act is contrived, shallow and feel extremely forced, especially the last few sequences of the film. It felt so out of left field for this story and yet it feels so familiar and stereotypical.

PERFORMANCES
Charlotte Gainsbourg and Stacy Martin once again do a fabulous job bringing this story to life and despite some scripting issues, they shine through and through. Gainsbourg gets out of the bed more in this one and we see her in some more depressing scenes, which she delivers on well. Stellan Skarsgård as Seligman is fantastic once again. His character, well I don’t want to spoil anything, so I’ll just say he does a great job. And Mr. I’m Not Famous Anymore does a solid job as well, although he doesn’t have much to do. Say what you want, but LaBeouf can act if he wants to, despite his mental loss.

SCORE
Once again von Trier uses no original score, but uses some nice classical pieces that fill the music spaces very well. The music in this setting isn’t as prominent, given the content we are ingesting. However, there are some scenes where the music shines and is used well to bring those certain moments to life. Overall, there’s good stuff here if you pay attention enough to hear it.

FINAL THOUGHTS
Nymphomaniac Part 2 isn’t quite as strong as Part 1, which was disappointing but there are some strong elements here that make it interesting. To see a women’s life just continue to fall apart is depressing but what does it say about the choices we make and how to seek help if we need to? Those themes are explored well through the first two-thirds of the film and the dynamics she has with everyone in her life shines a light on why addiction is something to be taken seriously. The final sequences though, just took the air out of the tires. It was like driving a race car in first place but as you’re about to cross the finish line to win, you slam the car up against the wall for no reason. Just didn’t seem to fit the rest of the film at all. (Slight Spoiler) Given Joe’s life, it’s not surprising and it’s something you see coming a mile away.