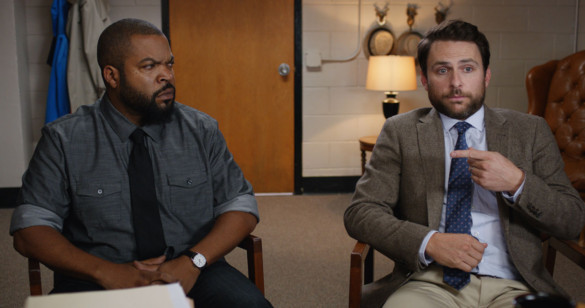 Synopsis: When one school teacher gets the other fired, he is challenged to an after-school fight.

Fist Fight is directed by Richie Keen and stars Ice Cube, Charlie Da, and Tracy Morgan. I expected this to just be another dumpster fire comedy where I would laugh at how ridiculous this whole thing is. To much of my surprise, the film was better than I expected, at least to a degree.

Andy Campbell (Charlie Day) is a mild-mannered teacher who is trying to get through the last day of school amidst the senior pranks and looming budget cuts. After an incident causing ill-tempered Ron Strickland (Ice Cube) to get fired, Strickland challenges Campbell to an after school fight. At 3PM, the fight of the century is going to go down.

The entire marketing for this film is focused on the fight between Ice Cube and Day, so I was afraid that the bulk of the film would be very Fifty Shades in terms of awkward dialogue and one-dimensional characters. A few supporting characters do fit that bill unfortunately, such as Jillian Bell’s Counselor Holly and Tracy Morgan’s Coach Freddie Coward. Morgan’s character especially seemed out of place spouting out terrible one-liners the whole time. As for Counselor Holly, she talks almost the entire film about having sex with students, which I think is a subject that should not be joked about.

Charlie Day and Ice Cube are as different as day and night, thus the premise of Fist Fight. However, that idea also raised chemistry concerns that could have either lent itself for great comedy or painful awkwardness. Day’s Campbell, at first, is very over-the-top and his dialogue does not fit the typical Charlie Day mold. As the film goes on, Campbell becomes a likable character though that you do have sympathy for. You already know what you are getting from Ice Cube in terms of acting, so credit director Richie Keen for making it work with him and Day. The banter between the two seem real and believable.

The film picked up for me in an unexpected way, with a scene at a school talent show. The majority of this film’s jokes deal with, you guessed it, penises. I still cannot believe that we find those jokes funny, maybe that is why Fifty Shades does so well? The scene at the talent show is genuinely funny though because it was so unexpected and teaches a lesson for everyone involved.

The actual fight that Fist Fight builds up toward, is choreographed pretty well and does not end up the way you think. There is a message here that everyone can learn from and that is probably the biggest takeaway from this movie. The fight lasts for quite a while, and for my money, it better (and bloodier) then Batman vs Superman. Come on Warner Bros., how do you make this fight more interesting than Batman vs Superman?

Fist Fight is not a perfect movie by any means but I found myself enjoying this much more then I originally thought I would.