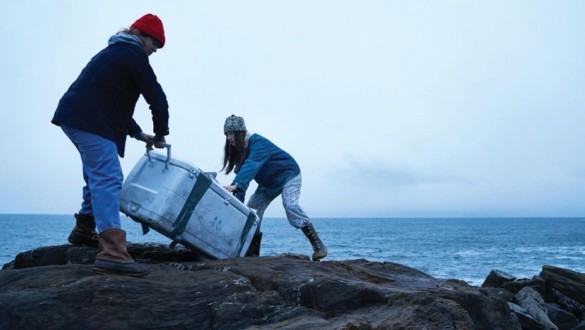 Synopsis: While grieving for the loss of their mother, the Connolly Sisters suddenly find they have a crime to cover up, leading them deep into the underbelly of their salty Maine fishing village.

Women killing men is my favorite genre, so of course Blow the Man Down is right up my alley. It also provides a fresh spin on the noir genre while also taking us back to the genre’s mores.

Although you could easily categorize Bridget Savage Cole and Danielle Krudy’s debut feature as a neo-noir, the heroines are not femmes fatales—nor are they two-bit dames. They’re sisters who find themselves embroiled in a sinisterly comical plot of dirty hometown scandals… almost by accident.

When we’re introduced to Priscilla and Mary Beth Connelly (Sophie Lowe and Morgan Saylor respectively), they’re mourning the loss of their mother in the seaside Easter Cove, Maine. Mary Beth is more impulsive and stormier than her sister. Saylor, who did not get enough credit for her skillful work on Homeland, takes this role and puts all her talents on display yet again. Lowe has the trickier part, though. Priscilla is the serious one of the two, more mature and pensive. It’s striking how Lowe manages to tacitly display a wide range of emotions with just her posture and stare.

Facing mounting bills and a recently inherited fishing business that’s barely afloat, Mary Beth decides to channel her woes into a late-night drinking spree, wherein she attracts the attention of a scum bucket whose drunken belligerence and male entitlement warrants his slaying, as it ought to.

And along with the pragmatic accessory-after-the-fact Priscilla, the sisters chop the bastard up into tiny bits, stuff his body parts in a cooler, and dump him into the salty sea. You know, as one does. Problem solved, right?!

Ehh, not so much. Because left behind at the scene lies Priscilla and Mary Beth’s blade, stamped with their family business’s name—which becomes this film’s McMuffin, a la the engraved cigarette lighter from Strangers on a Train. What follows is an exhumation of all the town’s buried skeletons. Turns out, this friendly New England village is not as quaint as it seems (they never are), and the sisters learn just how unsavory the place is—and how their late mother’s links to the ominous Enid Nora Devlin (Margo Martindale) tie a lot of it together. Because if pulp lit has taught us anything, it’s that small towns are where all the juiciest stuff happens, and Easter Cove is no exception.

Now, clutch your pearls, because I daresay Margo Martindale has never been better—and for someone with three Emmys and over 100 acting credits on IMDB—that’s saying something. At the very least, she hasn’t been this good in a while. Martindale is simply delectable as Enid, the proprietor of the Oceanview, ahem, Bed and Breakfast (a front for the local brothel). Martindale naturally upstages everyone with her fierce Mainer accent and madame-pimp swagger. Martindale’s energy makes it clear: Enid is not someone to be messed with. Look, Enid has some serious scores to settle, and Martindale taps into the character’s ferocity with quite a bit of bite.

The amusing thorns in Enid’s side come in the form of three nosy biddies (June Squibb, Annette O’Toole, and Marceline Hugot) who want her sinful establishment out of their community. Susie, Doreen, and Gail do not approve of Enid’s line of work, because they believe that the Oceanview is the common denominator for all the crime in Easter Cove—and perhaps they’re not entirely wrong… The busybody trio often act as a self-deputized morality police force, providing several chuckles along the way, especially when their overwhelming judgment blinds them to their own quandaries.

Blow the Man Down is a debut that reminds me of another strong debut: Joel and Ethan Coen’s Blood Simple—with a heavy helping of Fargo-esque charm. Murder, scandal, dark humor, and vibrant characters in a bewitching locale—what more could you want? Plus, it features another Coen trademark: folk music! Cole and Krudy’s debut is bookended with an ensemble of deep-voiced sailors bellowing lyrics illustrating the local goings-ons in a whimsical Greek chorus fashion.

For a film with a tight runtime of 90 minutes, the filmmakers pack in a lot and keep the story moving at a brisk pace. They also remarkably maintain the film’s spirited yet mischievous mood throughout. With Blow the Man Down, Bridget Savage Cole and Danielle Krudy have established that they’re a directing team to watch out for.