Movie Review: ‘The Perfect Candidate’ is a Progressive Look at Politics in Saudi Arabia 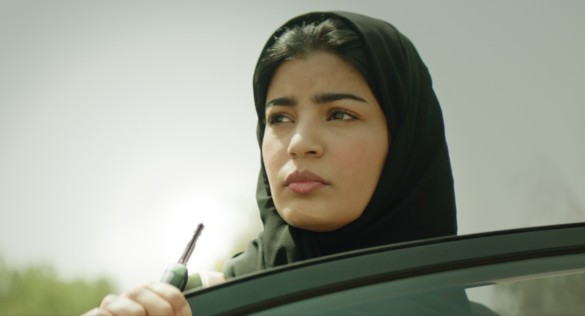 Synopsis: A young female Saudi doctor’s run for office in the local city elections forces her family and community to accept their town’s first female candidate.

Saudi Arabia is still a very conservative country when it comes to women’s rights because of their interpretation of Islamic law. In the last several years, things have loosened a little bit, such as the right to drive a vehicle, travel abroad, graduate from college, and voting. In the world of cinema, movie theatres were banned until 2018 – two years ago – but that didn’t stop Haifaa al-Mansour to learn movies by videocassette and become the first female director from the nation.

In her fourth feature film, a young female Saudi doctor named Maryam (Mila Al Zahrani) deals with the usual restrictions and conformities of a Muslim woman. In the beginning, we see an old man being taken in after an accident, but when Maryam tries to see his injuries, he angrily rebuffs her because she shouldn’t touch him. Even though she has the experience to qualify upwards in her career, none of the male higher-ups make room for Maryam. Seeing the road leading to the clinic completely bumpy and unpaved, Maryam makes a bold move and says she will run for office for the city council. This, obviously being a woman, is farther than any woman has done in politics and it becomes an uphill battle for recognition and acceptance in the community and to her father.

al-Mansour keeps the story tight as she lays out the path Maryam has to run, not walk, through in becoming the title of the movie. Outside of her career as a doctor, she sings at weddings, following the path of her widowed father, a musician in a Saudi band. However, he is skeptical regarding his daughter’s ambitions, especially when locals chastize her and say women only belong in the household. It becomes a clash of the generations, where Maryam pushes to modernize herself like an American-styled campaign and other candidates find her presence a sham and offensive. It is a subtle feminist film in Saudi Arabia, something that would never have been thought of a decade ago.

Having made a splash with her first three films, Wadjda (submitted as Saudi Arabia’s first Oscar nominee for Best International Film in 2012), and her two English films, Mary Shelley and Nappily Ever After, al-Mansour’s return to her native country on a more progressive tone could be eye-opening for those unaware of Saudi culture and values. She has encountered criticism from her home country on her previous work for daring to question these values, but also praise for talking about things usually taboo at home. Again, with The Perfect Candidate, she has made some rumbles but puts on a perfect platform for the rights of women in such a restrictive country for the modern century.